Bitcoin, the world’s largest and most expensive cryptocurrency, is sitting large-and-in-charge at a market capitalization of $833 billion. However, when it comes to new chains like Ethereum, Terra, Solana, and others, seasoned crypto investors are increasingly looking away from this tried-and-true figure in favor of a metric which more closely reflects usability, trust, and value circulating on a blockchain. It’s called Total Value Locked (TVL).

TVL is a metric which measures the total amount of money sitting in DeFi protocols on a blockchain. Increasingly, TVL is measured against market capitalization to rationalize or substantiate the market capitalization of a chain – it’s one of hundreds of ways that crypto maximalists have thought up to “value” a chain, find up-and-comers, and decide how to invest. However, if you’re lost and just YOLOing into coins – we’re pretty sure that’s okay too (nobody said this had to be a science.)

However, maybe these mathy crypto bros have a case: TVL was first used specifically on Ethereum, the chain which took blockchain from “mere payment network” to a multi-faceted foundation for systems. In the early days of Ethereum DeFi, the TVL of protocols spoke – on some level – to the trust, confidence, and outlook that investors saw in it.

For years, Ethereum was the only game in town. But now, since we live in a world of many “Ethereum Killers”, investors have started tracking TVL of other, competing chains.

In January 2021, Ethereum’s TVL was just $22.57 billion – and it represented 97% of all value locked on chains tracked at the time, according to DeFi Llama. As the proverbial crypto pie has grown, Ethereum’s TVL has risen to over $100 billion. However, its TVL dominance has fallen. In fairness, that’s to be expected – more chains = more competition. At the peak of Ethereum’s dominance, it had to share the pie with just seven other chains. Today, it shares that pie with 85 tracked chains on DeFi Llama. 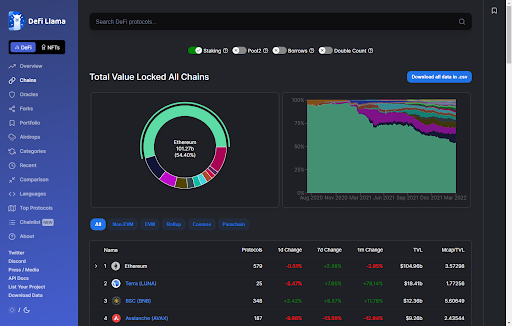 However, in fairness to the competition, they’ve never looked so good. In just over 15 months, emergent chains such as Terra, Binance Smart Chain, Avalanche, Fantom, Solana, and Polygon have taken Ethereum’s share of the pie down to just 53.1%, an all-time low notched to little coverage last week. And most of their emergence can be credited to a healthy bout of FOMO, but also an interest among DeFi tinkerers looking for greater yield and lower fees.

Take Terra, for example, which has seen its TVL rise by +77% in the last month: it can credit most of its growth to its high-interest “savings” protocol Anchor, which offers investors 19.5% APY on its $UST algorithmic stablecoin. Terra sits behind Ethereum in TVL dominance, but far below it – at just $18.58 billion in TVL. Other chains such as Polygon and Avalanche can credit a large portion of their growth to trusted Ethereum apps – such as Aave and Curve – extending support to their chain (among others.)

Nonetheless, Ethereum is squarely in the lead in this niche (but important) blockchain-related race. And if they have anything to say about it, the launch of Eth2 could be a significant catalyst which shifts interest back to the chain that started it all.