CNBC has a good summary of the new iPhones, AirPods, and Apple Watches announced: 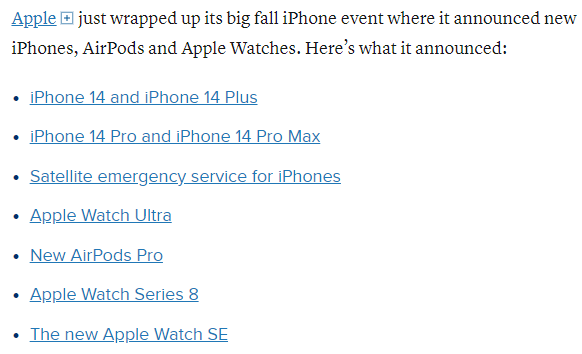 The first thing of note is that the prices of the new iPhone stay the same as last year. Given the inflationary pressures facing most of the U.S. economy (and the world), many had expected a price increase for most of Apple’s products.

Additionally, Apple’s push into health care continues. Its new Apple Watch Series 8 has a temperature sensor, which can help monitor health data, including ovulation. Given the sensitivity of this health data, the company designed the device to keep data secure with enhanced security features. ⌚

And speaking of safety, the company also announced the ability to connect its iPhone 14 series to satellites for emergency services. Apple partnered with Globalstar to offer this long-rumored capability. 🆘

The stock didn’t react much today, which CNBC notes is fairly typical based on past events. Instead, we should expect movement in a month or two as data about the current iPhone cycle trickles in. 🗓️

While Elon Musk continues to make changes to Twitter, the real-world consequences of his actions continue to play out. 🙃

Many had argued the “pay for verification” process was dangerous because it would be difficult to tell real accounts from fake. However, Musk went through with the change anyway…but is now having to backpedal on that decision several days later.

Amazon’s “Get Paid To Leave” Program

After laying off 10,000 corporate and technology employees earlier this week, Amazon is stepping up its efforts to reduce headcount further. ✂️

This time they’re using a “voluntary severance” program to incentivize employees to resign by November 29th. And if they change their mind, they’ll have until December 5th to withdraw their application. How about that for an awkward conversation?

There were some major Wall Street players in the news today; let’s find out why. 👀

The first is Elon Musk, who revived his deal to buy Twitter at the original $54/share price just days before they were due in court. The news sent shares soaring towards that buyout price before they were halted for about three hours, opening again briefly before the market closed. Twitter confirmed that it received Musk’s letter of intent to complete the transaction at $54.20/share and intends to close the deal with him.

What Toothpaste & Software Have In Common

Toothpaste and software companies don’t typically have much in common, but today they do. Colgate and Salesforce have both attracted the attention of activist investors. 🧐

Starboard Value is picking up shares of Salesforce after they’ve fallen more than 50% over the last year. The fund’s founder, Jeff Smith, says there’s opportunity in the enterprise software maker and that its valuation discount is due to a “subpar mix of growth and profitability.”

Huadi Heck Did That Happen?

It’s been a little while since a strange, low-float Chinese company rallied triple digits. But fear not, another one has popped up. 📈

Its name is Huadi International Group, and it’s a China-based micro-cap company in the business of industrial stainless steel products. While its products are used in various industries, the company’s exposure to China’s real estate market has been of major concern for investors.