Supply chain issues have affected most industries throughout the pandemic, hitting automakers particularly hard. In July, General Motors warned investors that it had about 95,000 vehicles lacking some components. ⚠️

The Fed Can’t Get Ahead

Overall, while the company remains optimistic, investors appear less so. $F shares were down 5% after hours and are down 11% so far in today’s session. 👎 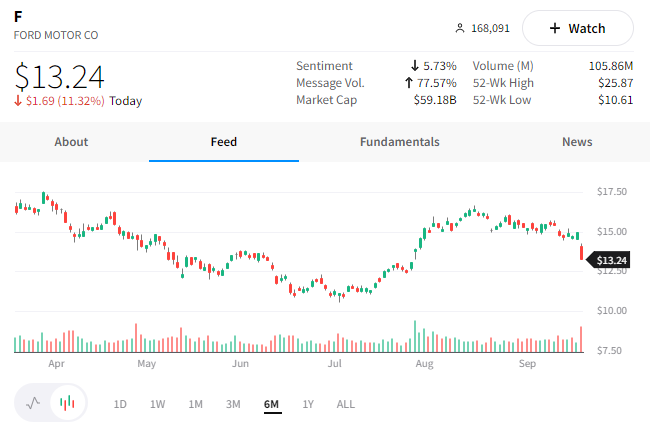 With other central banks beginning to pull back on their aggressively hawkish language, many wonder if the Federal Reserve will do the same at next Wednesday’s meeting. 🤔

Today was the last inflation reading before then and did not bolster the dovish argument.

Elon Musk officially closed his $44 billion Twitter takeover last night and is wasting no time at all in making changes. We guess we wouldn’t either if legally forced to spend $44 billion, but still. 😂

It began with Musk entering Twitter’s San Francisco headquarters on Wednesday carrying a sink and changing his Twitter bio to “Chief Twit.” 📝

Starbucks has not been exempt from the market’s wrath over the last few years. The stock is trading at the same level as three years ago and remains 40% below its all-time high set in 2021. However, at today’s investor day, Starbucks outlined a plan that it hopes will reenergize its performance. ☕

The event, led by interim CEO Howard Schultz, presented actions and target investments in the company’s partners, customers, and stores which it expects to accelerate its long-term growth.

American Airlines reports results on October 20th. However, today it preannounced that its third-quarter sales are likely better than previously expected.

The company said revenue for the quarter that ended September 30 will be up 13% from Q3 2019, above its July forecast of a 10%-12% increase. The strong summer travel demand helped it cover rising costs. 💪

Beyond Meat Continues Its Cuts

The struggles at Beyond Meat continue.

Today, the company drastically cut its revenue outlook for the second time due to slowing demand for faux meat as consumers look for chapter options in the current inflationary environment.