Is a short squeeze incoming for Bitcoin? The warning signs are certainly there. But first – what is a short-squeeze?

In a nutshell, a short squeeze is what happens when an instrument moves higher, often sharply and in a more dramatic way than it generally moves. What happens during that sharp move is traders who are short (they want the instrument to move lower) end up becoming buyers.

The higher prices move, the more money they lose. Eventually, those short traders abandon their positions (often unwillingly) and become buyers, resulting in a short squeeze.

Yesterday, on-chain analytics firm Santiment, Tweeted an observation that the traders piled into short positions last Friday (August 26), the most since May 2022.

📉 Traders continue to #short whenever prices see a notable price dump. According to the $BTC average funding rate across #Binance, #BitMEX, #DYDX, and #FTX, the reaction to Friday's drop was the most aggressive traders went against markets since May. 😮 https://t.co/x3rRvK9VOV pic.twitter.com/QzuyELTCws

We will look at a chart that not too many people pay attention to: the daily Bitfinex BTCUSD Shorts chart. Now, sometimes it’s hard to wrap your head around how to look at this chart. It’s a chart showing existing short positions on the derivative exchange, Bitfinex.

The higher the line moves, the more people want Bitcoin to move lower. What happens if Bitcoin spikes higher and triggers a short squeeze? Then this chart will do the inverse; it will spike lower – at least, that’s the most probable behavior we should observe.

The cool thing with this data is that it can be measured and analyzed just like any other price chart. On the daily BTCUSD Shorts chart, there are two back-to-back divergences present: Regular Bullish Divergence and Hidden Bullish Divergence. 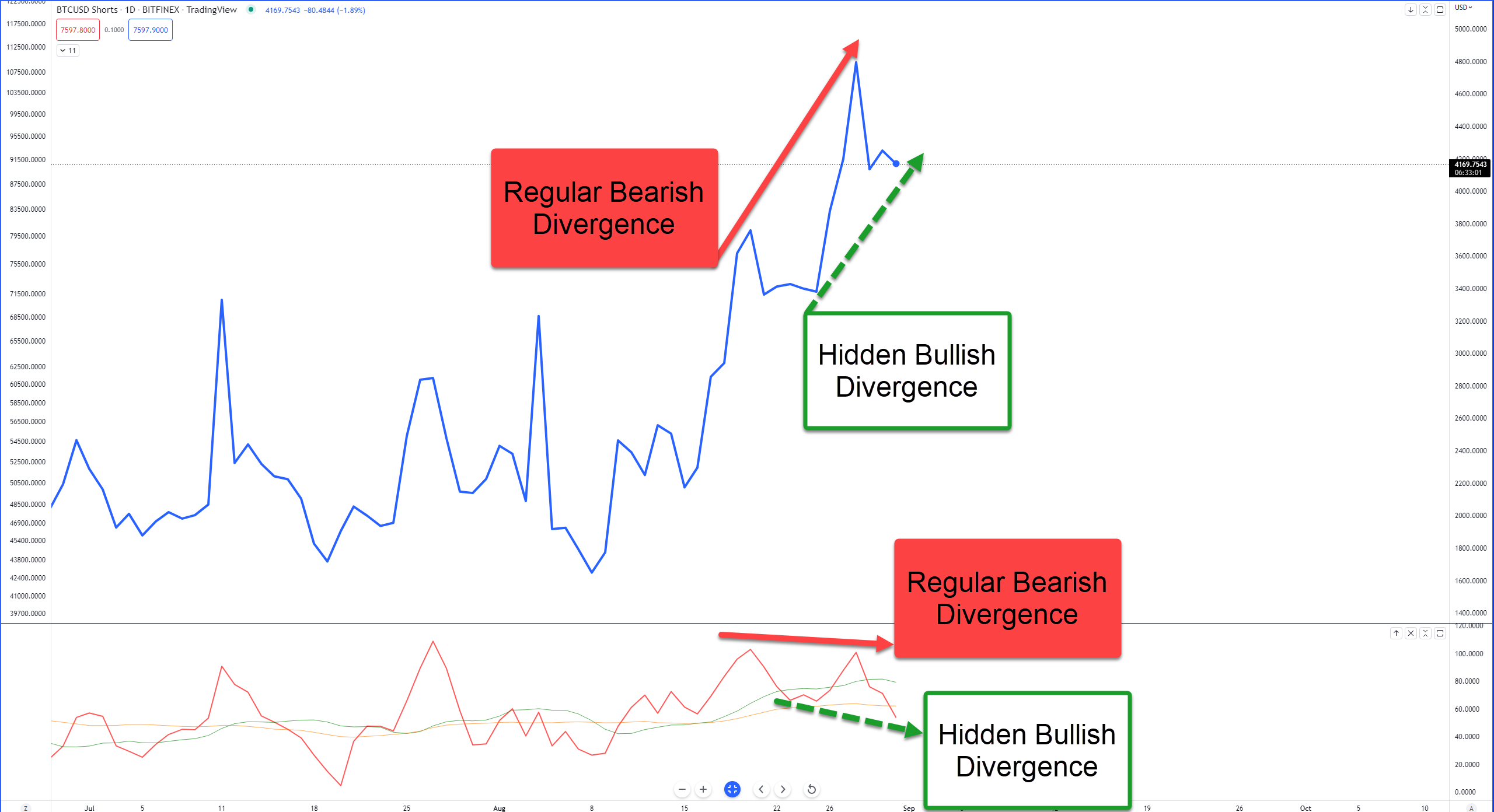 The analysis here is a little bit wonky because you have two opposing divergences. Regular bullish divergence is a warning that the current upswing is likely extended and may reverse lower. But hidden bullish divergence, which is only valid in an uptrend (which it is), warns that the pullback is likely to return to upwards movement. Time to look at a higher time frame for some clarity.

The weekly chart gives a good reason why the daily chart might be a warning of BTCUSD Shorts collapsing soon.

I’ve minimized the BTCUSD Shorts line chart and enlarged the Composite Index oscillator chart. Observe the horizontal redline on the Composite Index. You’ll see that it demarcates where many of the major peaks exist on the weekly chart. Additionally, you should note the massive gap between the current Composite Index line (red) and its fast (green) and slow (yellow) moving averages.

The end of the month and a US holiday (Labor Day) occur nearly simultaneously, creating a period of significant volatility ahead – so keep an eye on the market! 📈

Hedge fund Fir Tree Capital Management filed a lawsuit against Grayscale Investments over “potential mismanagement and conflicts of interest,” according to a Bloomberg report.

At the core of the lawsuit, filed in Deleware, is for Grayscale to lower its fees, begin redemptions, and hand over documents dealing with Grayscale’s relationship with the Digital Currency Group.

Have you ever wondered what percentage of people holding Bitcoin is in the red or the green? Wondering if people are still interested in crypto and Bitcoin? One of the secret weapons of cryptocurrencies is on-chain analytics. On-chain analysis gives normal people like you and me access to the same information that the bigwigs have.

It’s like having the ability to see dark pools in the stock market. Let’s take a look at some of this on-chain data now.

Alameda CEO Spotted Near FBI And US AG Offices?

PLEASE CONFIRM: A user claims that they spotted Caroline Ellison at Ground Support Coffee on West Broad in SoHo Manhattan at 8:15 AM. This would mean she is not in Hong Kong and is in NY not in custody.

Happening Now In Crypto includes relevant and important updates for multiple cryptocurrencies such as: governance decisions , voting, forks, changes to rewards, upgrades, and other important changes.

Synthix ($SNX.X) – Voting has started on a proposal to update cross-asset swaps on the 1inch ($1INCH.X) integration address. Voting on this proposal will end on Dec. 14, 2022. See Messari’s Governor Proposal page for more info. 🤖