Wall Street continues to punish software stocks that don’t blow expectations out of the water. And today’s victim was CrowdStrike. 😱

The cybersecurity company reported Q3 adjusted earnings of $0.40 per share vs. the $0.31 expected. Revenues of $581 million also topped the $574 million expected. Additionally, its annual recurring revenue (ARR) of $2.34 billion rose 54% YoY, with $198 million in net new ARR added in Q3.

In other words, its customers feel skittish about the economy, reducing or delaying demand. And with the economy expected to remain vulnerable, many expect those headwinds to persist.

As a result, investors sent $CRWD shares down 17% to their lowest level since August 2020. 👍 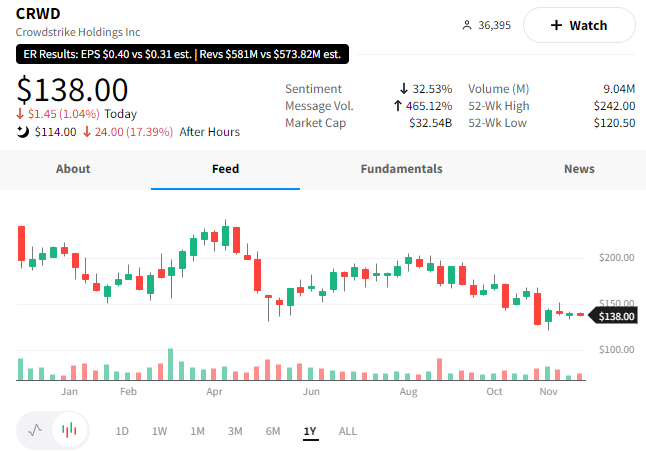 Today’s most highly-watched earnings report came from Tesla. But despite all the fanfare, shares didn’t move as much as anticipated. 🤷

While we all love talking about tech, there are other industries also reporting earnings today. Let’s recap the most notable ones.

First up is Boeing, which missed earnings and revenue expectations. 👎

One of today’s biggest earnings announcements came from Microsoft, which beat on earnings but missed revenue expectations.

One Stock $SNAPs, Another Hits The $SPOT

Another quarter, another post about Snap’s disappointing earnings results. In what seems to be a tradition at this point, the company missed revenue expectations but beat on earnings.

CNBC recaps the key numbers below:

Another day, another set of tech earnings. Let’s get into it.

First, let’s start with Intel, whose report left analysts with many questions. 🤔

Most of this week’s earnings reports came today. Unfortunately for the bulls, the bad news outweighed the good. 👎

Let’s recap what the biggest movers had to say.