Tata Consumer (+3%) is in the race to acquire Bisleri. More details below. 💯

Adani Enterprises (+0.5%) is in talks with Mubadala Investment Company and Abu Dhabi Investment Authority (ADIA) to raise $5 billion, according to media reports. 💰

IPO update. Keystone Realtor closed at Rs 557 per share, up 3% from its issue price on its Dalal Street debut. ✅

KPI Green Energy (+6%) will consider the proposal of a bonus issue on Nov 30. ✌️

They point to India’s strong domestic fundamentals as the main reason. PS – oil prices are down more than 20% from their peak. As we all know, India imports 83% of its total oil requirements. Lower oil prices would strengthen Govt finances, and boost consumer spending and corporate profits. Goldman Sachs forecasts corporate profits to grow 15% over the next two years, which is a positive. 💯

Having said that, valuations have turned slightly expensive. At 22x one-year forward P/E, Indian equities are trading at a significant premium to their historical and regional average. This in turn may limit the upside for stocks, according to Goldman. Improving global economic factors like easing inflation worries and China reopening may also restrict the outperformance of Indian stocks. 🧐

Tata Consumer Products bounced +3% intraday on reports that they may acquire Bisleri for Rs 7,000 cr. 💸

Bisleri was originally an Italian company founded by Felice Bisleri in 1851. Veteran Industrialist Ramesh Chauhan acquired the company in 1969 for Rs 4 lakh. Fun fact: Ramesh Chauhan created various super brands such as ThumsUp, Gold Spot, Maaza and Limca before selling them to Coca-Cola in 1993. 🍹

Today, Bisleri is India’s largest bottled drinking water company with a +60% market share. Bisleri operates across mineral water, soft drinks and soda. They have 122 plants (13 owned) and a solid army of 4,500 distributors across India. Bisleri pulled in a respectable Rs 220 cr in profits from a Rs 2,500 cr topline in FY21. 🚀

Tatas also sell packaged mineral water under the “Himalayan” brand. They recently expanded into the energy drink/hydration market with Tata Gluco Plus. Tata’s neither confirmed nor denied reports of acquiring Bisleri. Other brands like Reliance Retail and Nestle are also believed to be in the race. Let’s see how this goes. 👍 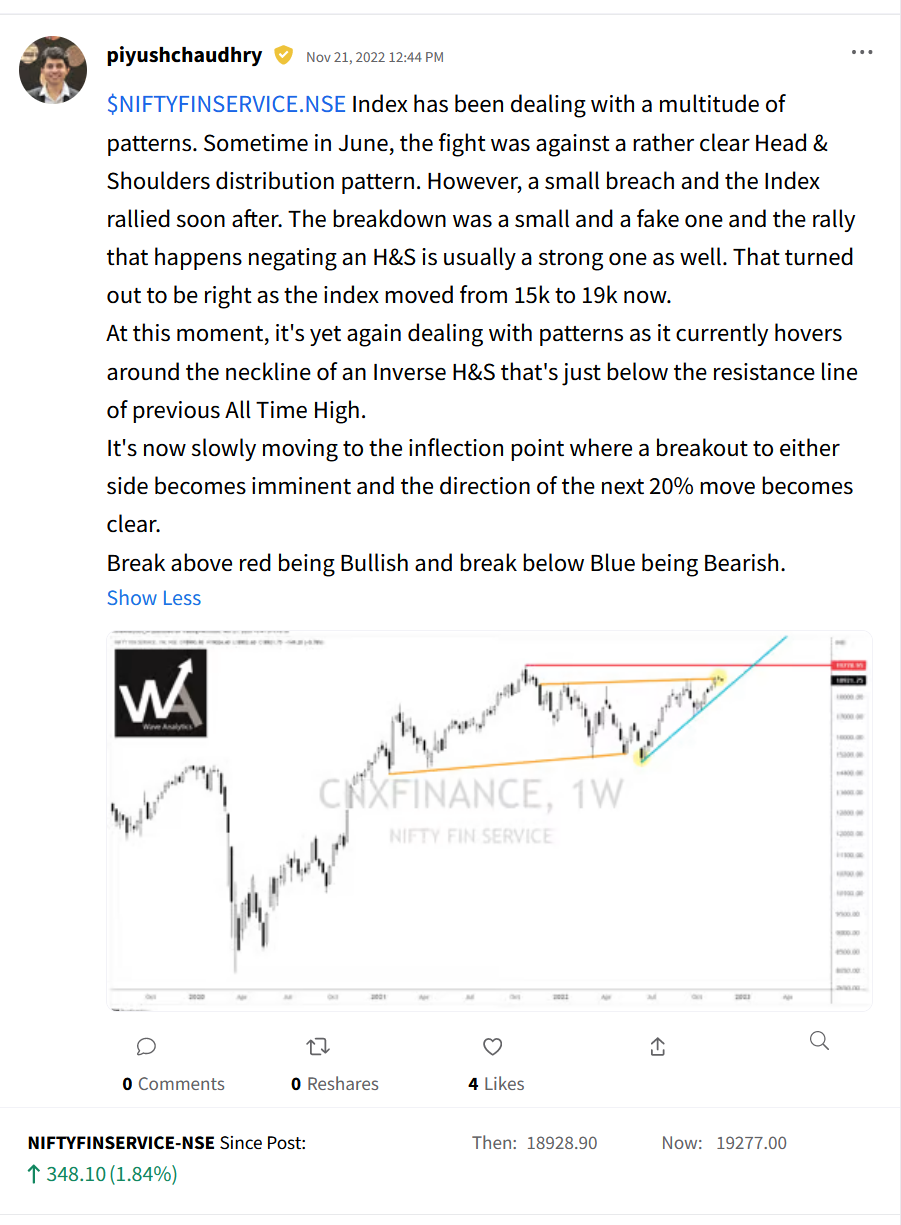 Financials have been on a tear recently. Here’s an interesting analysis of the Nifty Financial Services Index by Piyush Chaudhary on Stocktwits. Follow him for more awesome insights like these and add $NIFTYFINSERVICE.NSE to your watchlist and track the latest from our community. Here’s the link: https://bit.ly/3TZQMml.

​​🤯 NFTs Are Dead? Even In Bear Market, A Bored Ape Sells For Nearly $1 Million

💯 James Cameron Reveals Massive Budget Of ‘Avatar: The Way Of Water’; Says Movie Needs To Collect At Least $2B

🌞 Lessons The Rest Of India Can Learn From Modhera, India’s First Solar-Powered Village

Markets hit a new all-time high in November. Hopes of the US Fed reducing its pace of interest rate hikes, strong Q2 results, a cool-off in oil prices and FII buying turbocharged bulls. PS – Goldman Sachs has a target of 20,500 by Dec 2023, + 9% from current levels. Most sectors closed in the green. PSU Banks (+16%) hit the highest level since Nov 2017! Metals rose on a monthly basis for the fourth time in the past five months. Pharma (-0.5%) and Autos (-1.1%) witnessed minor cuts. 🚀

Good evening everyone and welcome to the new trading week. 🎲

Markets were super volatile as the second and final phase of voting in Gujarat began today. Nifty and Sensex closed flat. The Midcap Index (+0.3%) hit a new high and Smallcaps (0.4%) also outperformed. 📈

Markets closed up for a second straight week even after today’s profit booking. Nifty and Sensex slipped 0.6%. On the flip side, Midcaps (+0.9%) and Smallcaps (0.6%) were up big. The advance-decline ratio was split evenly. ✌️

Hola Amigos. One more day to go for the weekend. 😇

Up, Up And Away

Federal Reserve Chairman Powell’s speech at the Brookings Institution was highly anticipated. And based on today’s price action…he did not disappoint.

There’s a lot to get through, but let’s look at takeaways from his speech and today’s economic data. 🔍