Markets were down big today. Nifty and Sensex dropped over 1% each, the worst single-day fall in over a month. Mixed earnings, weak global cues and a sell-off in Adani Group stock made investors nervous. Midcaps (-1.5%) and Smallcaps (-1.2%) also witnessed deep cuts. The market breadth was extremely weak with 4 stocks falling for every gainer. 🚨

Adani Group stocks got hammered. Adani Ports (-7%) was the top loser on Nifty. Adani Transmission, ACC and Adani Total Gas were down 7%-11% each. Check out their (scary) charts below. 📉

Bharti Airtel will increase the prices of entry-level plans by 57% in 7 states. 💸

Zomato tanked over 9% to hit the lowest level since July last year. They recently announced that they will stop the 10-minute delivery service due to operational challenges.  🚫

Star Health Insurance is in talks to enter the life insurance business, according to media reports. ✌️

Teamlease Services will consider the proposal of a share buyback on Feb 3. 💰

The global crypto market cap slipped by 3%. Bitcoin was down 2%. Ethereum slipped over 5%. Cardano, Doge, and Solana crashed by 6% each. 👎

TVS is also betting big on the EV business which has paid off as they achieved a 14% market share in Q3. That’s insane considering they have only one product in this category which they launched just three years back!!!  💯

Going forward, TVS will invest north of Rs 1,000 cr to extend its family of electric scooters and also launch an electric 3-wheeler. They are confident of selling more than 1 lakh units in FY23 and aim to sell 25,000 EVs per month by March next year. 💸

Hindenburg Research, a US-based forensic financial research firm, released a super detailed report titled “Adani Group: How The World’s 3rd Richest Man Is Pulling The Largest Con In Corporate History”. In this report, they raised serious questions about the Group’s shareholding structure, related-party transactions and massive debt. Moreover, Hindenburg even disclosed that they have a short position in Adani Group stocks through US-traded bonds and non-Indian-traded derivative instruments. 🚨

FWIW, this isn’t the first time the Adani Group has run into trouble with a foreign research firm. In September 2022, CreditSights, a subsidiary of global credit rating firm Fitch, raised doubts over the Group’s debt levels. Next month, S&P Global Ratings withdrew their credit rating for Adani Transmission at the company’s request. 🫢

What’s more interesting is the timing of the Hindenburg report. As we all know, Adani Enterprises’ Rs 20,000 cr follow-on public offer (FPO), the largest ever in Indian history, opens for subscription on Jan 27. The Adani Group released a statement denying any wrongdoing and called the whole episode an attempt to undermine the Group’s reputation and damage the FPO. ⚔️

Meanwhile, panicked investors rushed for the exit door. Adani Ports (-7%) was the top loser on Nifty. Adani Transmission, ACC and Adani Total Gas were down 7%-11% each. Check out their (scary) charts below: 📉 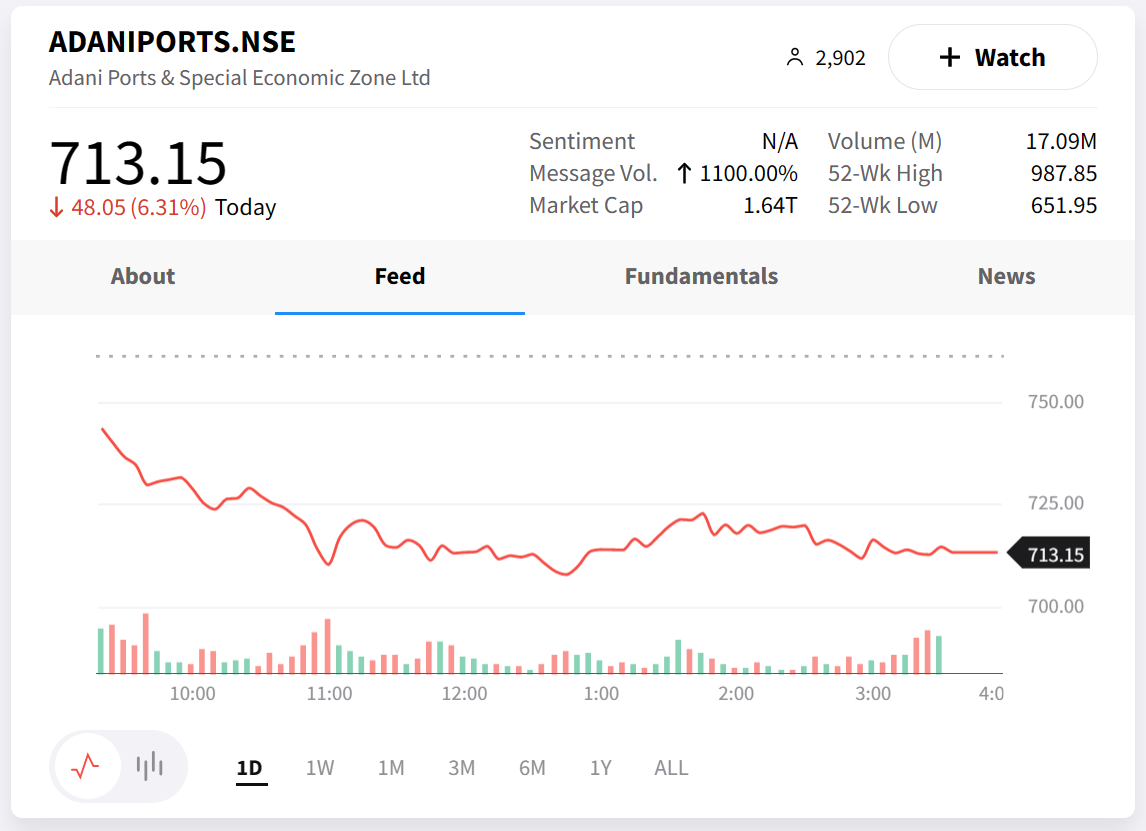 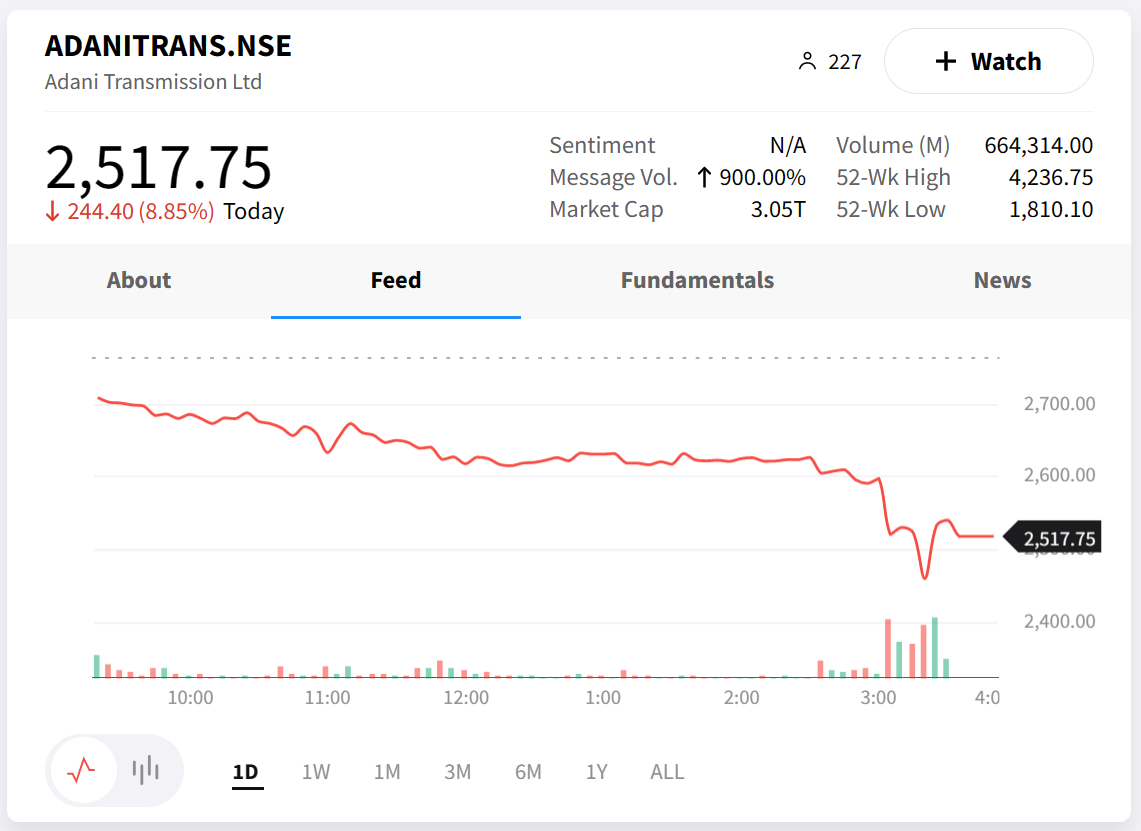 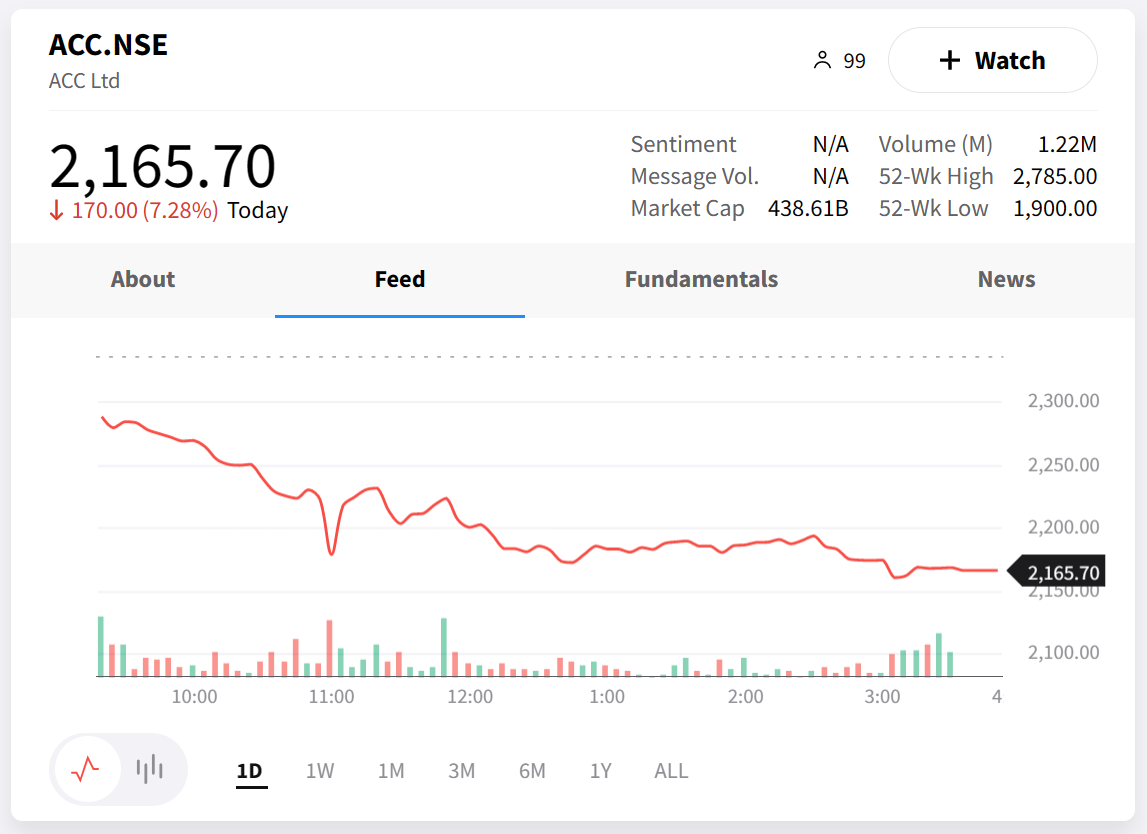 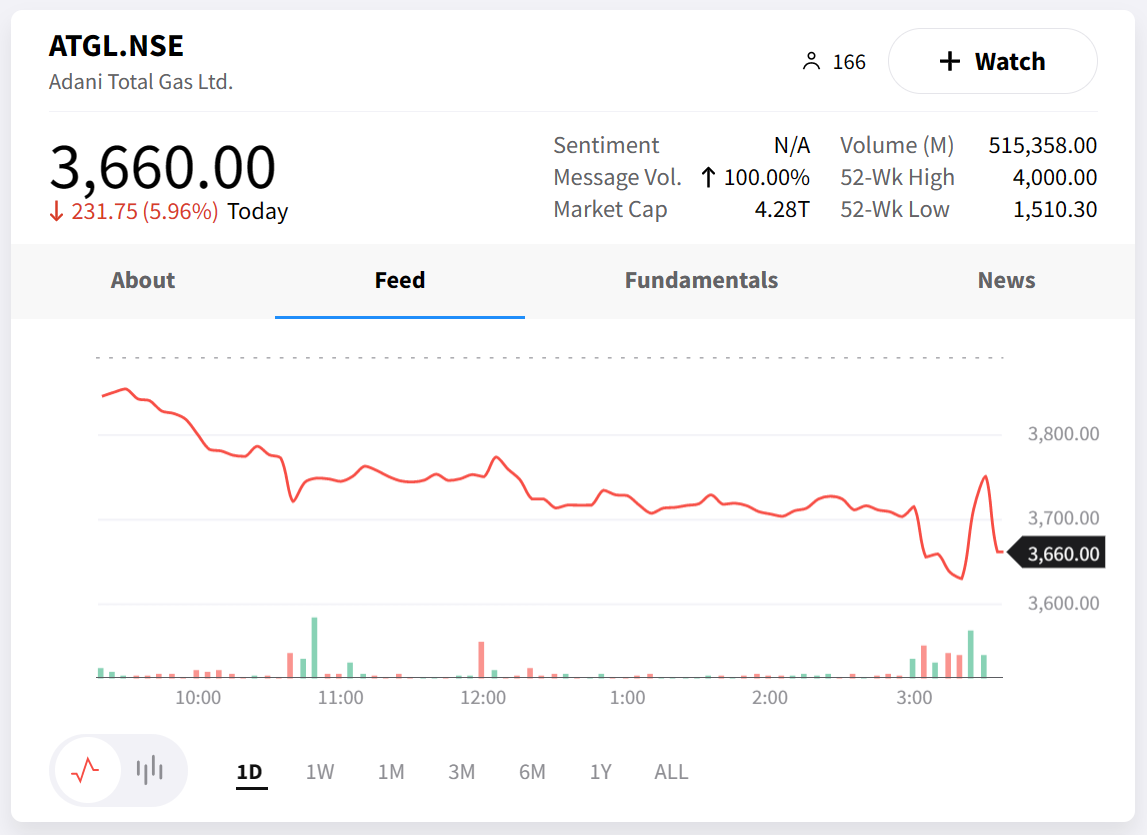 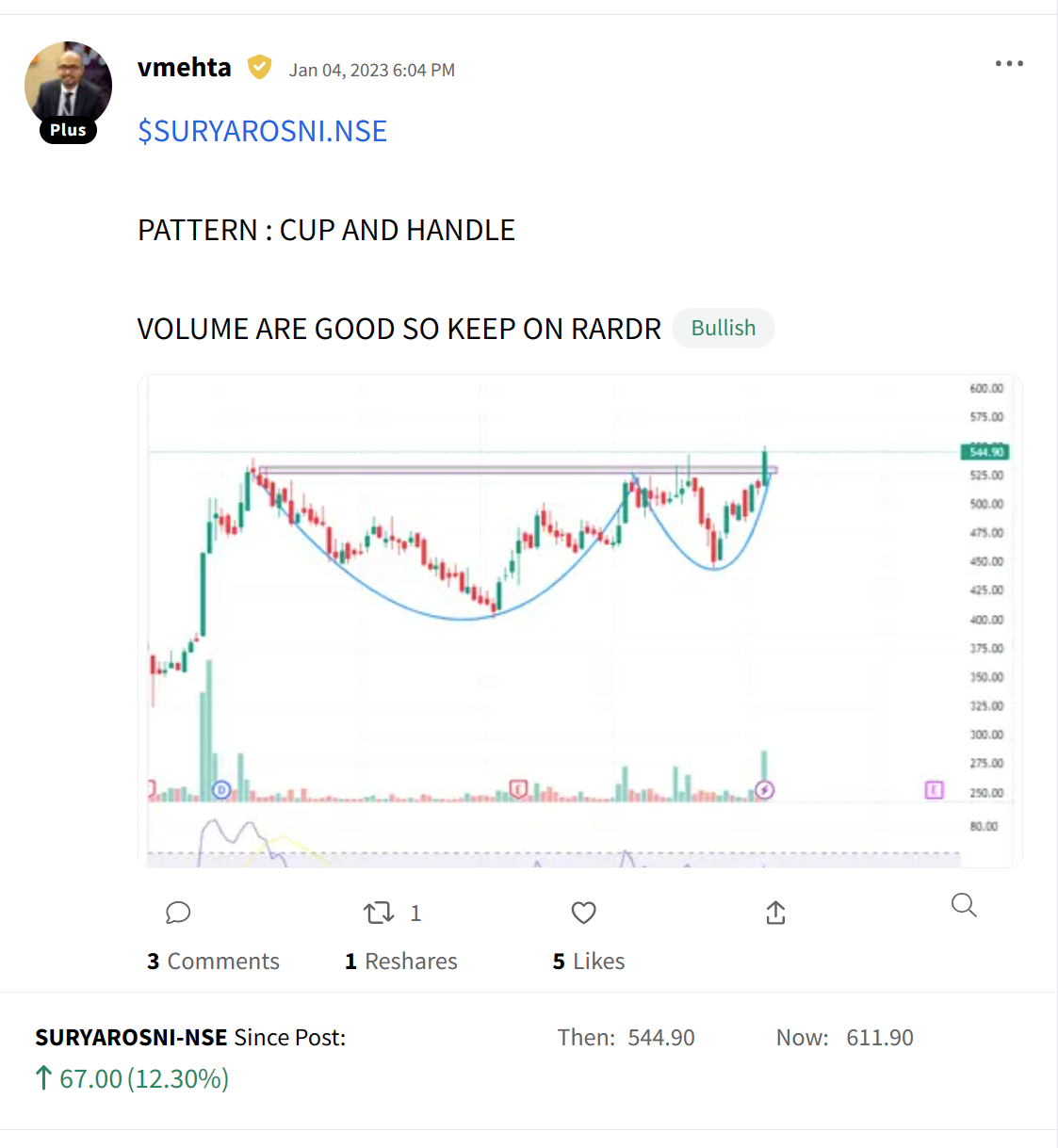 CMT chart guru Vishal Mehta gets it right again! Surya Roshni is up +12% in January. That deserves a huge round of applause! Follow Vishal for more awesome trading insights and add $SURYAROSHNI.NSE to your watchlist and track the latest from our community. Here’s the link: https://bit.ly/3JadHtz. 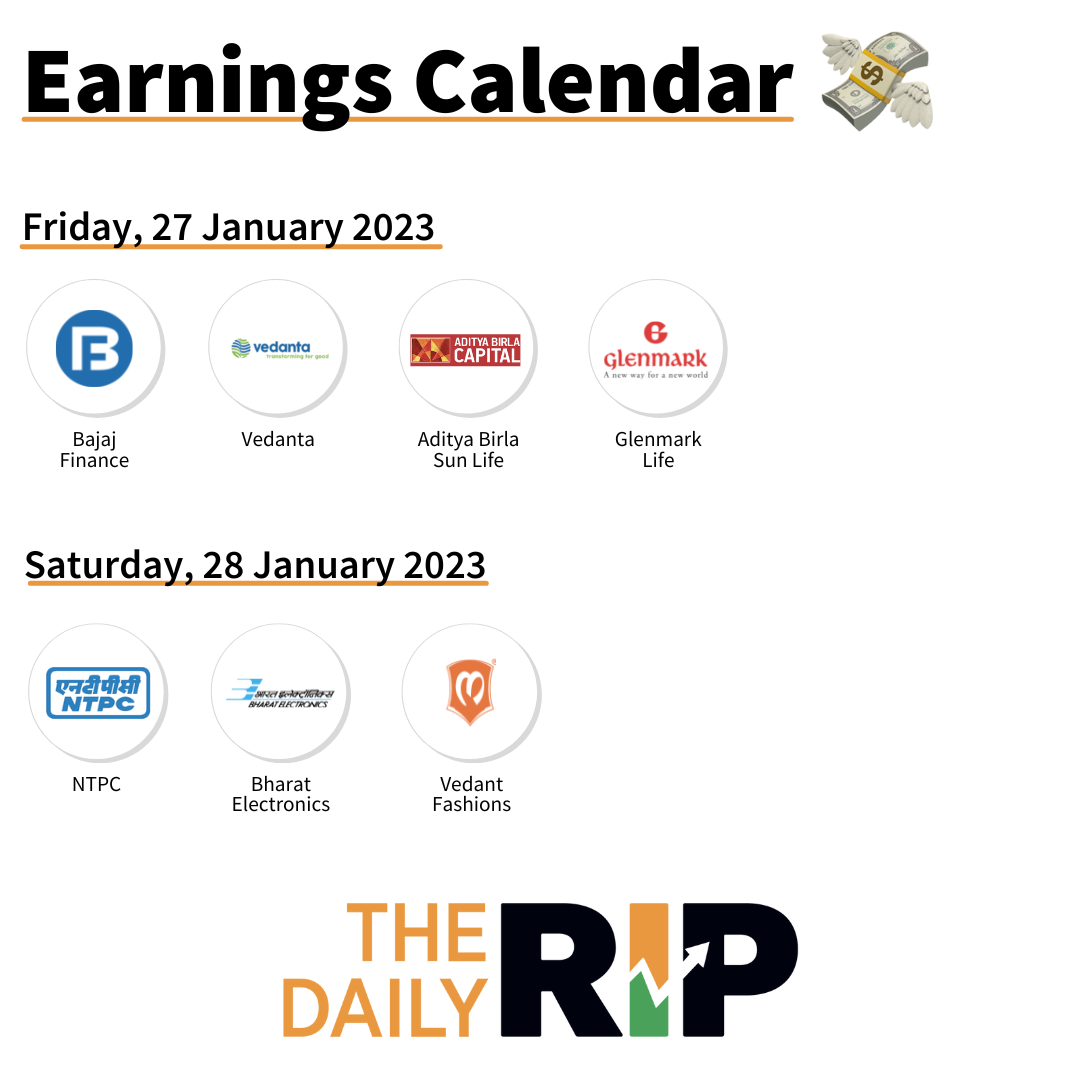 📱 BharOS, A Made-In-India Answer To Android And iOS Is Here. All The Details

😇 Bill Gates Is ‘Very Optimistic’ About The Future: ‘Better To Be Born 20 Years From Now…Than Any Time In The Past’

👩‍❤️‍💋‍👨 16 Underrated Dating Tips That Can Benefit Your Relationship

Hey folks. One more day to go for the weekend. 😇

Nifty and Sensex recovered from the lows to end with minor gains. Midcaps (+0.2%) and Smallcaps (+0.6%) fared better. The advance-decline ratio was split evenly. ✌️

The Indian Stock market was under massive volatility. But both Nifty and Sensex exhibited resilience and grew by 1.2%  and 2.4%, respectively, over the week. Midcaps (0.35%) and Smallcaps (1.73%) also had the same story.

Nifty and Sensex swung from one extreme to another as investors digested the budget announcements. Midcaps (-0.9%) and Smallcaps (-1.2%) ended with deep cuts. Over two stocks declined for every gainer. 👎

Nifty and Sensex pulled back after opening lower as investors bought the morning dip. Midcaps (+1.8%) and Smallcaps (+3%) were up big time. The market breadth was extremely positive with nearly four stocks gaining for every loser. 🚀

January 2023 Compared To Past Januarys

January 2023 was the best month for Bitcoin (and the broader crypto market) in over 15 months. 👍

How have previous Januarys faired?

Since the December meeting, commentary from the Fed’s members hinted at smaller rate hikes ahead, as did the economic data. The remaining questions were how high would the Fed take rates before pausing and how long will it need to leave them there before inflation makes a sustained move towards the 2% target?

As a result of that information, the bond market was pricing in a 25 bp hike at today’s meeting, another in March, and then a pause at the May meeting. And today, Jerome Powell and the Federal Open Market Committee (FOMC) unanimously delivered exactly what was expected.