The Weekend Rip: Winter Is Coming 🧊

Happy Sunday. We hope you’ve been vibing this weekend! ✨

The four major indexes are — once again — doing their own thing. The S&P 500 and Dow Jones traded up this week, whilst the Nasdaq Composite and Russell 2000 traded down.

Every SPDR sector ETF traded up by the end of this week. Take a look:

Earnings season is on the way out for this quarter. This week, we’ll get $HOOD‘s first earnings report as a public company. Other highlights include $RBLX and $WMT. Check out the earnings section below.

Also coming up this week: institutions will be filing mandatory reports. We’ll be reporting on some of the most-bought stocks by institutions and large money managers in the week ahead, so stay tuned.

That all said, here are last week’s moves:

It’s definitely annoying to talk about by now, but the world is coming to the reality that COVID might never go away. 😩

In countries such as Iran, Russia, Vietnam, Thailand, the Philippines, and South Africa, COVID-19 cases are climbing faster than ever. Some countries are even reporting a higher volume of cases than they did as the pandemic took the world by storm last March.

And in countries such as China and the United States, a resurgence in cases is threatening the recovery and progress made over the last year and a half. That’s why medical leaders, vaccine makers, and politicians are all starting to echo calls for booster COVID vaccines. 💉

Moderna President Stephen Hoge insinuated that boosters would be an inevitability; Anthony Fauci said that the U.S. should prepare for boosters, just days after the FDA authorized third doses to be administered for immunocompromised people. With that, it looks increasingly likely that vaccine boosters will be available to the public this Fall.

It’s unlikely the economy will shut down again, but COVID’s staying power stands to threaten dozens of industries and sectors. It’s widely expected that the Winter will bring an even greater resurgence of the virus, underscoring the urgency with which world leaders are trying to avoid another COVID crisis. 😷

However, with just over half of the U.S. fully vaccinated, booster shots might be a hard sell for many Americans.

Despite the fact you might not hear about them as much, the SPAC market is still very much so alive. But alive and well? That might be a stretch.

The IPOX SPAC index traded at YTD lows this week. Demand for SPACs has chilled, with some deal makers now seeking capital commitments to help finish their fundraising.

For small deal-makers, raising capital or finding a company willing to merge has gotten more and more difficult. In order to attract investors, new SPACs are putting themselves on a more aggressive schedule to entice a merger. However, it’s hard to know if a shorter schedule will make any difference. After all, over 700 SPACs are on the clock to pull a company into their orbit as of this week.

And even though larger deal-makers have better luck and the benefit of PR on their side? Nothing is a done deal. A number of post-deal SPACs have dropped aggressively lately, after failing to meet the expectations they set for analysts. Among them are companies such as $APPH and $SOFI.

In the worst case scenario, a number of post-deal SPACs have listed… and then imploded. One SPAC listing lost 54% of its value after its merger was finalized and then revised earnings estimates significantly lower after their first report. The SPAC’s sponsors, Fortress and Advent International, have posted significant losses as a result.

Semiconductor stocks have appreciated strong outperformance during the COVID-19 pandemic. However, one major bank is warning that a pullback is near.

Morgan Stanley analysts published a note on Thursday indicating that “winter is coming” for semiconductor companies. The news comes as many semiconductor stocks are beginning to “flash technical warning signs” according to several analysts. 😬😬😬

The report also axed price targets in semi stocks such as Micron Technology, which was downgraded by over $30 (to $75). According to Barron’s, other “memory makers” fell in sympathy with the downgrade. Among them were Western Digital, Samsung Electronics, and SK Hynix. Over the last few months, large money managers downgraded other semis such as NXP Semiconductors and Qualcomm. 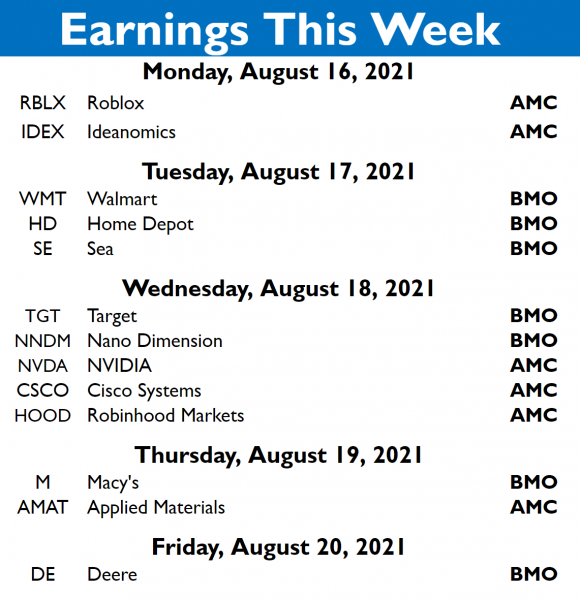 Be sure to know when your stocks are reporting. Check out the StockTwits earnings calendar.

💸 Student Investing Groups Have Undergrads Managing Funds Before They Graduate

No easy way to say it, but the crypto market is sitting on a very precarious level. The Total Market Cap’s weekly chart really shows how close the market is to another big drop.