Good evening, everyone. Welcome to the Stocktwits Top 25 Newsletter for Week 34 of 2021.

The Stocktwits Top 25 reports the 25 best-performing stocks in the S&P 500, Nasdaq 100, and Russell 2000 throughout the year. The goal is to track the biggest winners in America’s leading indexes.

Here are your Stocktwits Top 25 Lists for Week 34:

Devon Energy accelerated 18.1% to become the best performer. The energy company can be found on the Winners list below.

Moderna and West Pharma Services were the laggards. $MRNA tumbled 0.20% and $WST spilled 0.57%. 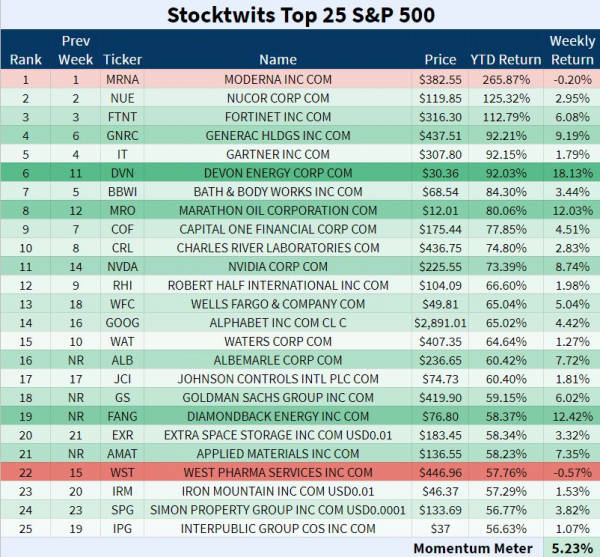 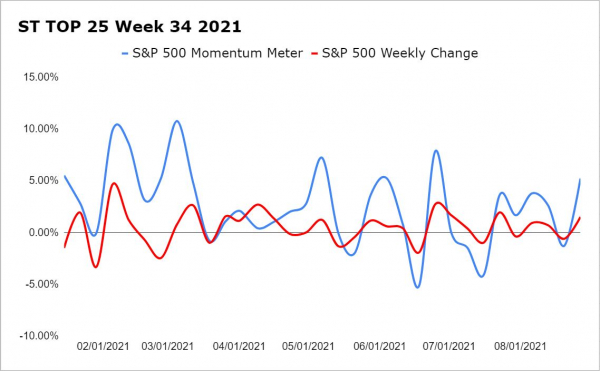 Minting millionaires one crypto at a time… 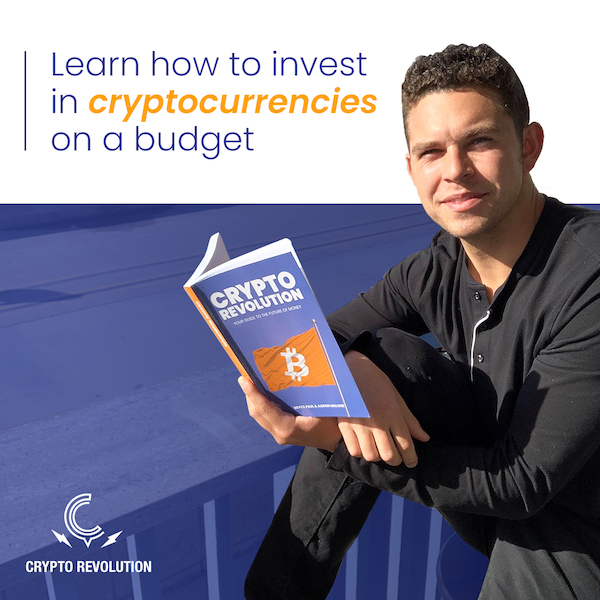 Had you put $2,000 into Microsoft at its IPO more than 30 years ago…you’d now have about $1.96 million. But one crypto investor turned his initial $8,500 stake into $7.5 million! Crypto is where it’s at, and there’s a simple way to start getting in on the action without having to be a crypto expert.

NXPI Semiconductors N.V. hitched a ride to #10 on the large-cap list this week, rising 10.4%. Peep $NXPI in the Winners section. 👀 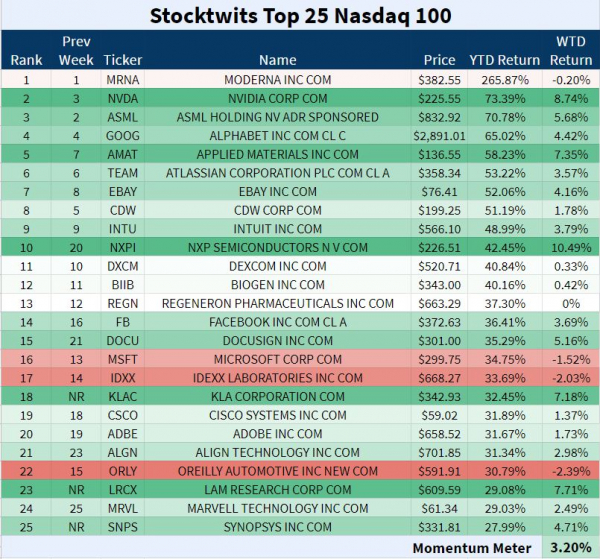 Cassava Sciences lost bigly this week. $SAVA plunged 43.9% and earned a spot as a Sinner.

Dynavax Technologies released its Covid-19 vaccine in Taiwan this week, helping it weasel up the ST Top 25 R2K leaderboard. Check out the Top Dawg below. 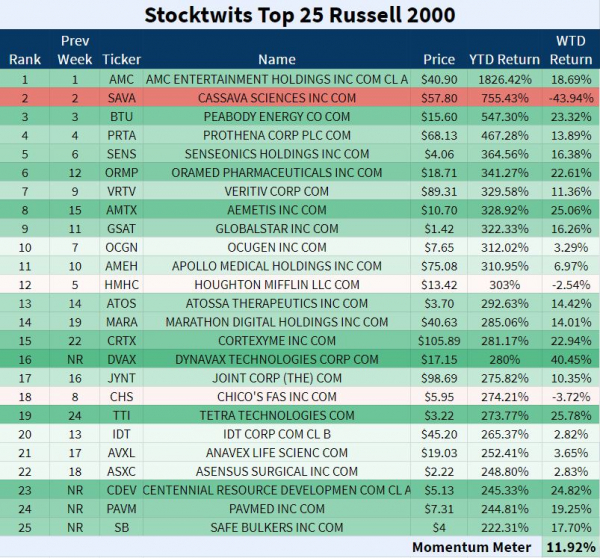 Shares of the biotech soared 14.4% on Monday after announcing the rollout of its COVID-19 vaccine in Taiwan. The company indicated that around 600,000 people were expected to receive the vaccine this week. 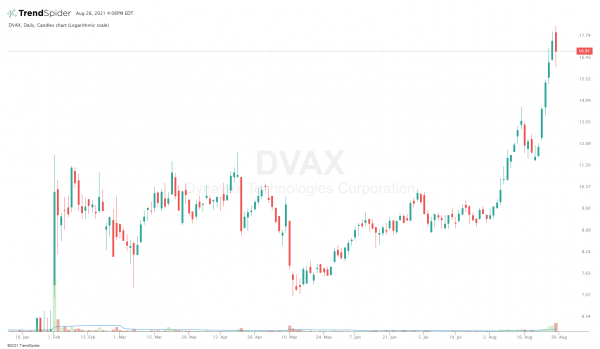 $DVN closed green four out of five days this week as the Energy ETF $XLE recouped nearly all of Week 33’s losses. 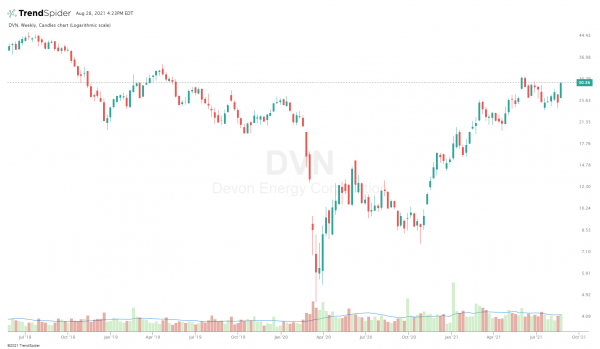 $NXPI traded positive everyday this week. The semi went on a complete tear, closing at all-time highs on Friday.

On Monday, the company’s board of directors approved the payment of an interim dividend. They also announced an increase to the company’s share repurchase authorization. The measures are based on the board’s belief in NXP’s capacity to deliver long-term growth and robust cash flow, as well as the capital structure’s substantial strength. 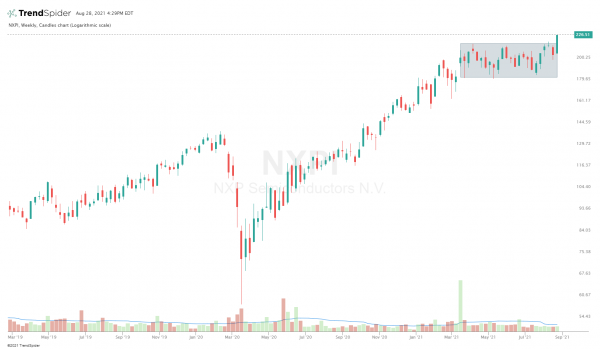 $TTI popped 12.9% on Monday, coasted Tuesday through Thursday, and tacked on another 15% on Friday.

Here is this week’s 15-minute chart:

$ORLY chopped around for most of the week before falling 1.4% on Friday.

The stock found support at its 50-day moving average, we’ll see if it holds in the week to come. 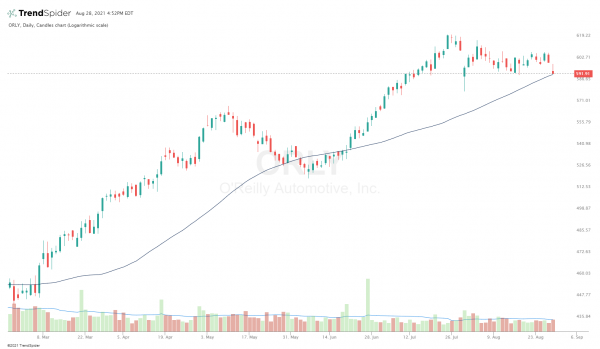 $SAVA sank 31.4% on Wednesday after a Citizen Petition was filed with the US Food and Medication Administration, seeking that two current studies for Cassava’s Alzheimer’s drug be halted. According to the Citizen Petition, Cassava’s usage of Simufilam is based on widespread data manipulation and deception.

Cassava Sciences responded by saying the company stands by its research, its scientists, and its scientific colleagues, and is taking steps to ensure that the facts are understood and appreciated.

“As a science company, we champion facts that can be evaluated and verified. This helps people make informed choices. It is important for stakeholders to separate fact from fiction, which is why we wish to address allegations head-on.”