Football Kicked Off. So Did Sports Betting. 🎲 🏈

$LTC.X temporarily boosted above the rest after a fake press release indicated that the blockchain would offer payments at Walmart. That was later found to be untrue. Check out the chart section below to see which coins BUCKED today’s pullback. 🤑

$ITMR increased 46.56% today after it was announced that the medical company will be bought out by ZOLL Medical for $538 million.

Football SZN is officially HERE. 🍂 🏈 So is sportsbook SZN. More on that below.

Democrats officially disclosed the details on their proposed tax increases. Despite Republicans’ anticipated unanimous opposition to the proposal, here are some key tax deets:

Taxes on corporations, investors, and high-income business owners will see boosts — the corporate tax rate will increase 5.5% to 26.5% (up from the the Trump-era 21%). A ‘three percentage point surtax’ will be enforced on any American with income over $5 million. Capital gains taxes will also increase.

The tax-shakeup will help fund a $3.5 trillion antipoverty, healthcare, and climate plan. According to Duke law professor Lawrence Zelenak, tax changes will make the income-tax system redistributive. Zelenak claims “It’s using the income tax to take money from only half the population and using it to distribute money to half the population.”

Now, we just have to wait and see if the proposal actually gets passed… Senator Ron Wyden of Oregon reminded legislators “It’s important to address the fact that billionaire heirs may never pay tax on billions in stock gains.”

One Little Known Company is Disrupting the At Home Dining Industry 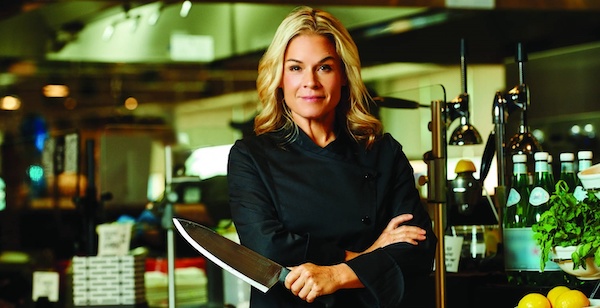 Firing on all cylinders, Home Bistro, Inc. (OTC: HBIS) is taking the home delivery, eat-at-home market by storm with new menus, celebrity chef status and a convenience factor that changes how we prepare home cooked meals forever. See why world-renowned “Iron Chef” Cat Cora is on board!

Get the Details Here

A record-breaking number of legal bets were made this weekend as the new NFL season kicked off, according to GeoComply Solutions. The company handles compliance and verifies that customers are making transactions from approved states. 🎲

GeoComply indicated that it recorded “58.2 million geolocation transactions across 18 states and Washington, D.C.“ from Thursday to Sunday night. That’s more than double the number of bets booked this time last year. The bulk of the activity was booked in New Jersey, Pennsylvania, Michigan, Illinois, and Arizona (which legalized sports betting on Thursday.)

These figures fare well for online betting platforms such as DraftKings and FanDuel (both utilize GeoComply’s compliance services.) Despite a slower year for sports during COVID-19, both companies booked hundreds of millions in revenue. With these heftier numbers teeing off the NFL season, both companies — and their friends, like MGM, Caesar’s, and Penn National Gaming — are looking at even bigger figures. 🤑

Flutter Entertainment, which owns FanDuel, was down 0.65% today. DraftKings was down 3.2%.

The long-awaited Cardano Alonzo update is finally here. 🙌 The update added smart contract support, putting it on the war to compete with Ethereum, Solana, and other big blockchains.

However, the upgrade couldn’t help $ADA.X‘s price, which fell 10% today. And not everyone is cheering about the latest update…

Some critics say that the Cardano blockchain isn’t on par with smart contract platforms like Ethereum. Minswap, a Cardano dApp with aspirations to become Cardano’s first DeFi app, shut down temporarily after its launch due to an inability to process multiple transactions. However, Charles Hoskinson (Cardano’s founder) denied any issues with Cardano and tweeted that there is “there is nothing to fix.” 🤔

Leading up to the upgrade, $ADA.X skyrocketed, hitting an all-time high of $3.09. Post-upgrade, the token’s price plummeted. Ultimately, the near-term correction in the price might reflect investors “selling the news.” But the addition of smart contracts is a big W and a necessary one to maintain Cardano’s place as the third-largest crypto. 🏆

Uranium stocks are the highest they’ve been in more than a decade. That boost is thanks to an eager buyer and a global shortage (sound familiar?) 💭

In the last five days, the Global X Uranium ETF has risen 10.5%. Three of the ETF’s largest holdings — NexGen Energy, Cameco Corp, and Denison Mines — have benefited from the shortage in uranium, which has forced prices north.

To make matters worse, one eager buyer purchased a stockpile of the commodity. Sprott Physical Uranium Trust has acquired millions of pounds worth of uranium. According to Morgan Stanley analysts, Sprott’s fund has become “the driving force behind [uranium’s] resurgence.”

$URA is up over 75.4% YTD, making it once of the best-performing ETFs on the market this year.

While larger coins like Bitcoin and Ethereum were taken to the woodshed over the last few weeks, it hasn’t all been doom and gloom. We’ll shine a spotlight on a few leading coins: 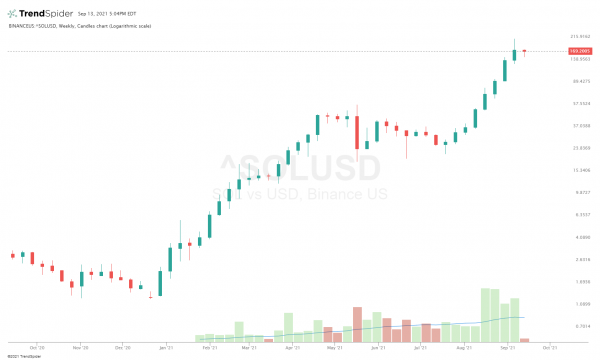 Algorand was one of the first coins to etch new highs along with Solana. Here’s the weekly chart, turning past resistance at $1.85 into support: 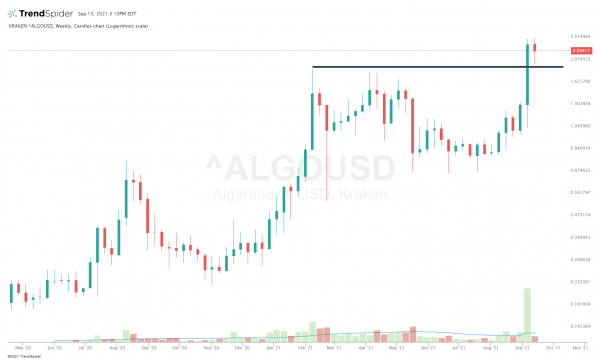 Cosmos continues to climb higher. 💫 $ATOM.X printed new highs today above $38. It was trading under $10 in mid-July… 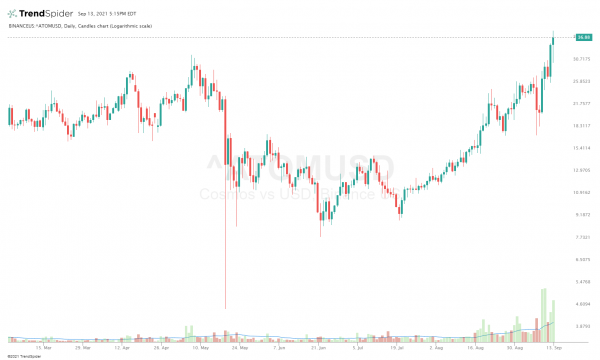 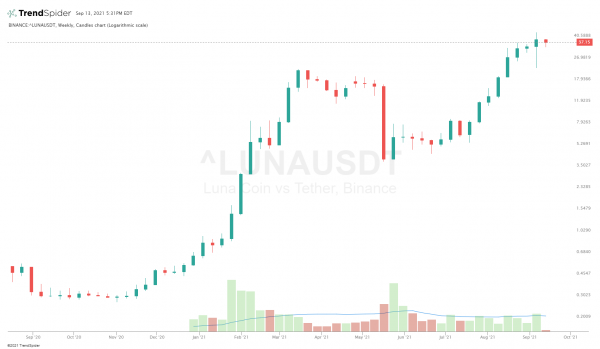 Elrond traded at new highs yesterday above $245. Will these prices hold?? Place your bets… 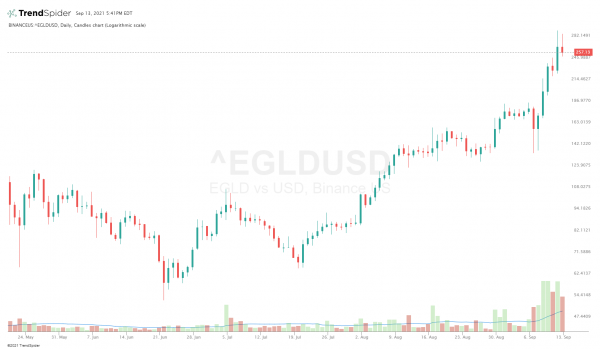 🚴‍♂️ Revolt of the Delivery Workers