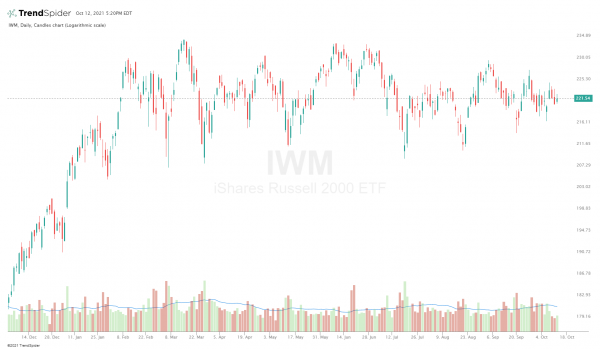 We’ve got our hands full with fun economic news tomorrow as investors wait on minutes from the Federal Reserve’s meeting, as well as inflation and retail sales statistics. 📈 💯

Tesla trucked through the $800 level, closing firmly at $805.72. Elon’s EV company sold 56,006 vehicles produced in China — the most Tesla’s manufactured since production began in Shanghai two years ago.

Not Even Apple Is Safe from Shortages

We all know there’s a supply chain shortage of nearly everything these days. 😪 As of today, that shortage includes iPhones, too.

Apple announced that it would slash its 2021 iPhone 13 production targets by as much as 10 million units due to chip shortages among manufacturers such as Broadcom Inc. and Texas Instruments. CEO Tim Cook commented “The majority of constraints we’re seeing are of the variety that I think others are seeing, that I would classify as industry shortage.“

In the latest quarter, Apple’s iPhone sales were up 50% YoY to $39 billion. It’s still untold what the iPhone 13 shortage will mean for Apple’s next quarter worth of sales. However, Apple set targets for up to 90 million new iPhones by the end of this year — and an iPhone shortage right before the holidays might not fare well for its financials. What has the world come to?? 🎁 😱 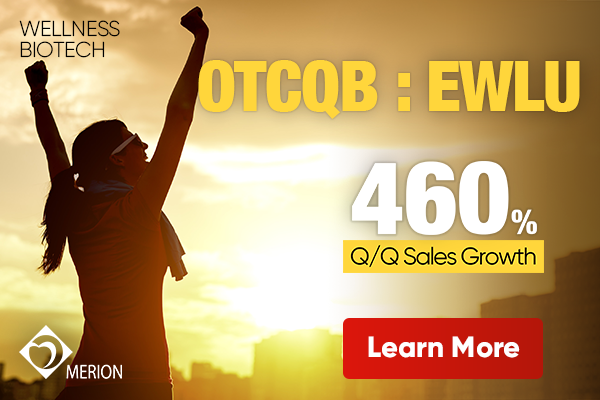 Merion, Inc. (OTCQB:EWLU) is on a mission to enhance people’s lives through superior nutrition supplement products. The effective advanced small molecule + cell carrier technology has led to a continuous increase in on and offline sales, up 420% Q/Q.

I was today-years-old when I found out about Best Buy’s “healthcare strategy.” 🤔 The retailer is acquiring Current Health, a privately-owned telehealth and remote patient-monitoring software company. Terms were not disclosed.

Best Buy has made two previous health-related acquisitions, both part of an effort to capitalize on a “high-growth sector.” In 2018, Best Buy acquired GreatCall, a company that makes cell phones and connected health devices for aging adults. In 2019, the company acquired Critical Signal Technologies. Both cater to the aging population.

Current goes a step further than the two previous acquisitions — Current allows for wearables and other health devices to provide doctors with up-to-the-minute patient data. Since seniors are less likely to be tech-savvy and extremely likely to rely on some sort of medical care as they age, Current’s ecosystem offers a lot of potential value. That value could be magnified by Best Buy’s reach in consumer electronics. 🤖 💰

A proposal put forward in the Democrats’ $3.5 trillion social spending bill could parachute tax credits to Americans buying electric vehicles. However, some EV automakers aren’t jazzed about it.

Several non-unionized automakers have a bone to pick with the proposal. Toyota execs in 11 states wrote that they support an EV tax credit, but believe that Congress is expending limited resources on a tax credit which benefits “those wealthy enough to buy high-priced cars and trucks.” 💰 💰 Honda Motor voiced its frustration, saying the incentive “discriminates among EVs made by hard-working American auto workers based simply on whether they belong to a union.”

Tesla CEO Elon Musk commented that the new proposal was “written by Ford/UAW lobbyists“ who benefit from the bill while building EVs in Mexico. Musk has formerly indicated that the UAW abandoned the Fremont factory Tesla bought years ago — one of a handful of quarrels he’s had with the auto union. UAW has not successfully organized workers at new-age automakers like Tesla, Rivian, or Lucid.

While it’s true that some titans of industry have actively (and maybe even illegally) prevented unions, UAW itself has had its own issues with corruption. And the decline of unions hasn’t helped. The Democrats’ proposal and bill still face enormous scrutiny in Congress. It’s not easy to know if this component of the bill will survive, but if it does, it would be a huge win for UAW and legacy automakers. 🚗 💨

Coinbase’s Time to Shine in the NFT World ✨

NFTs are digital assets linked to particular assets like digital art, videos, video games, and even physical assets like real estate. They aren’t fungible, meaning you can’t exchange one NFT for another like you can with Bitcoin and other cryptocurrencies. Unlike cryptocurrencies, NFTs are traded on marketplaces like OpenSea — not on crypto exchanges.

Coinbase’s NFT marketplace would allow its users to buy and sell Ethereum-based NFTs, the company said. The platform is expected to launch by the end of this year, according to media reports. 👏

Coinbase is modeling its offering after OpenSea (the largest NFT marketplace ), which has seen remarkable growth in past months, including a transaction volume of $3.4 billion in August alone. Will Coinbase NFT become the “OpenSea killer?” ⚔️

Coinbase’s entry into the NFT world could boost its business to a new level, although it’s somewhat late to the party. Rival crypto exchanges like Binance and FTX.US have been thriving in the NFT craze for months. With that being said, Coinbase’s plan tells us two things: that NFTs are far from dead and that the battle of the blockchain networks is heating up. 🌶️ 🔥

Revance Therapeutics is getting hammered today after the company flunked an inspection done by the U.S. Food and Drug Administration (FDA). 🔨

The regulator had a bone to pick with Revance’s working cell bank (WCB), which is required at the “later stages of therapeutic development and manufacturing,” according to BioReliance. The FDA said that Revance’s “Quality Unit lacks the responsibility and authority for the control, review, and approval of outsourced activities.“

That’s a big problem for Revance, which is commercializing a “next-generation version” of Botox called DaxibotulinumtoxinA. DaxibotulinumtoxinA has been called a possible treatment for frown lines, forehead lines, Crow’s feet, upper facial lines, Cervical Dystonia, Upper Limb Spasticity, and Plantar Fasciitis. In short: there’s a lot going for DaxibotulinumtoxinA. 👏 But this run-in with regulators goes to show that regulators can giveth and taketh away.

Inspections of company facilities are usually required before any treatment can be approved by the FDA. In Revance’s case, the company will likely need another inspection before securing the FDA’s green light for approval.

$RVNC stock fell over 20% today on the news.

🙅 Housing Might Be Expensive, But Some Analysts Expect Demand Won’t Last

🎮 Epic Games To Work With “Among Us” Developers

📉 Pandemic Has Disrupted Retirement Plans for 35% of Americans, Study Finds

💪 Market Is about to See the Strongest Earnings Season of Year, History Shows