We’re pulling into the thick of earnings season. This week is going to feature appearances from Netflix, Tesla, Snapchat, a slew of airlines, and some other consumer-facing brands. Here’s to hoping it goes well.

Speaking of Tesla, world-famous bear Michael Burry (who is credited with predicting the housing crash) said that he closed his bet against Tesla on Friday. He said it was “just a trade.” Since Burry initiated his position against Tesla, the price of the stock has risen substantially. We’ll have more on that this week. 👀

In crypto world: $NU.X rose 385% this week. It was the cryptoverse’s biggest gainer by a large margin. However, fans of $PERP.X, $DOT.X, and $BNB.X all appreciated some kind double-digit gains as well.

And how could we forget our darling Bitcoin? The crypto royalty fetched a 7.5% gain this week, trading above $61,000. $BTC.X is sitting just under $60K as of this writing.

This week’s Weekend Rip is a lil’ contrarian. We know a bear’s two cents don’t go very far on Stocktwits (y’all are notoriously bullish and we love that) but we’re taking a look at some macro trends in the economy with some healthy skepticism. Bare with us here. We’re exploring together…

But before that, let’s take a look at the market for the week:

During the early days of the COVID-19 pandemic, the U.S. savings rate hit a record 33%. Uncertainty pushed millions of Americans to put aside lots of cash and stop spending. 19 months later, little of that money has left the bank. 🏦🏦🏦

Though the pandemic appears to be waning, and that savings rate has fallen, people are still hoarding cash. According to Bloomberg, more than $2.3 trillion dollars socked away by Americans during the pandemic is still sitting in the bank.

Data from the U.S. government’s Bureau of Economic Analysis shows that the broader trend is unlikely to subside anytime soon. Both personal income and disposable personal income have seen paltry gains throughout 2021, even as the price of goods have increased because of inflation.

Economists have pointed out that many factors are influencing the decision not to splurge: rising prices are one of them, but so is the shortage of labor and the fear of more lockdowns or pandemic probs.

For people betting on a robust recovery, this looks pretty bearish. However, given the strong sentiment around the coming earnings season, investors might not have much to worry about. 🤔

We’ve seen some pretty solid earnings out of the gate (so far) this earnings season. So far, 82.9% of the 41 S&P 500 companies which have reported earnings are besting the analysts’ expectations. That’s a sign of a healthy market. 😊

But what about the economy? Well, employment is rising and wage growth indicates that the U.S. is recovering from the worst of the COVID-19 pandemic. However, some academics say that the U.S. might be in recession in spite of all that good data. 😲

A decline in consumer sentiment and expectations is pointing to a sad state of affairs in the U.S. economy. In its latest report for Oct. 2021, the University of Michigan’s Consumer Sentiment Index was down in every category both month-over-month and year-over-year. 📉📉📉

The Conference Board’s gauge, another consumer confidence poll, has also fallen. It has deflated for three straight months. The Morning Consult’s own Daily U.S. Consumer Confidence Indices shares the decline from COVID highs in May 2021. In the Morning Consult’s own survey, their future expectations score has been lower than their current conditions measure since Jul. 2021.

According to the researchers, “[the] downward movements in consumer expectations in the last six months suggest the economy in the United States is entering recession now.” Bloomberg says that slumps in consumer confidence and expectations are predictive in advance of a recession.

While the market might be doing well, it begs a repeat of this age-old (and highly annoying) question: how indicative is the stock market of the whole economy? 🧠

During the pandemic, a number of companies have retreated from traditional fiat currencies given fears about inflation or currency debasement. 😬

Among those companies are MicroStrategy and Tesla — which have seen big gains on their investments in Bitcoin since jumping on the crypto train.

According to online monitoring resource Bitcoin Treasuries, Michael Saylor’s MacroStrategy (which arguably led the Bitcoin balance sheet charge) has more than doubled its investment. The company holds 114,041 Bitcoin, which was bought at a cost basis of $3.16 billion. Today, it’s worth $6.81 billion.

Tesla, which has the second biggest Bitcoin balance sheet, bought about $1.5 billion worth of $BTC.X back in Feb. 2021. Today, the company holds 43,200 $BTC.X, which is now worth $2.58 billion. These kinds of gains (if exercised in full) would amount to Tesla’s entire Q2 net income. 🤑

And they’re not alone: Square, Marathon Digital Holdings, Coinbase, and many more companies own plenty of Bitcoin. 💰

Given continued concerns about inflation and currency woes, and Bitcoin’s continued rise, investors are asking what other companies might add $BTC.X to the balance sheet. 💭

Q3 earnings are starting to kick up. Take a look at what’s top of mind this week: 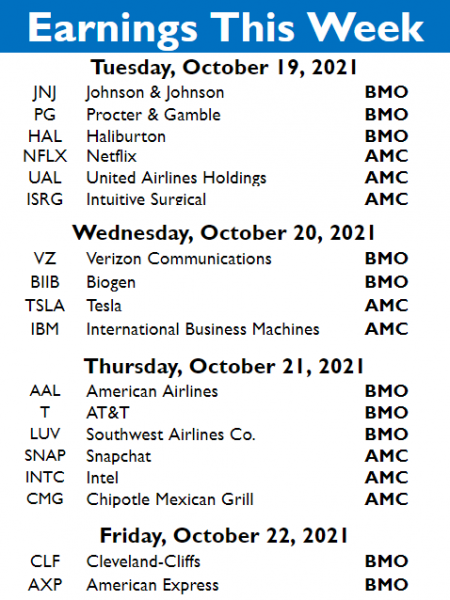 For more information on stocks that are reporting (and what our community is watching), check out the Stocktwits earnings calendar.

📈 IBD’s Moneyworks program is here and we’ve got 8 new lessons on personal finance! Learn about credit scores, buying a house and more*

📅 DC Fintech Week Is This Week. Check Out The Schedule.

✏️ The U.S. Is Redrawing Its Districts For The 2022 Election. Check Out What It Looks Like Now.

🏆 The Top 50 Restaurants In America, According to the New York Times

🛍️ How To Pick Winners This Holiday Shopping Season