Every sector got slammed. 🔨 Energy descended over 4% as the weakest of the bunch. Financials and consumer discretionary weren’t far behind – $XLF flopped 3.32% and $XLY faltered 2.73%.

Pfizer shares popped 6.1% to all-time highs and Moderna marched 21.8% after a new Covid variant was found in South Africa.

Oil prices, stocks, and bond yields all stumbled this morning on the news of a new COVID variant. The variant reportedly originated in Africa, and several cases of the virus have already been recorded in Europe.

The World Health Organization (WHO) called a meeting to study the latest variant, known as Omicron (B.1.1.529.) The new variant has a higher number of mutations than the delta variant, making it more transmissible than prior variants. Pasi Panttinen of the European Centre for Disease Prevention and Control shared:

“It looks like this particular variant has a very concerning sets of mutations especially in the spike protein, which is needed for its transmission properties as well as its protection against the vaccines… So based on the genetic information we are quite concerned about it.”

Countries such as France, Italy, Japan, and Singapore have already instituted travel bans or restrictions to South Africa. The U.S. went a step further and restricted travel from eight African countries.

Meanwhile, lockdown stocks are gaining on the news — $ZM shares boosted 7% and $PTON picked up 6%. Travel stocks lost as Expedia tumbled 11% this morning and Lyft, Airbnb, and Uber all stumbled about 5%. 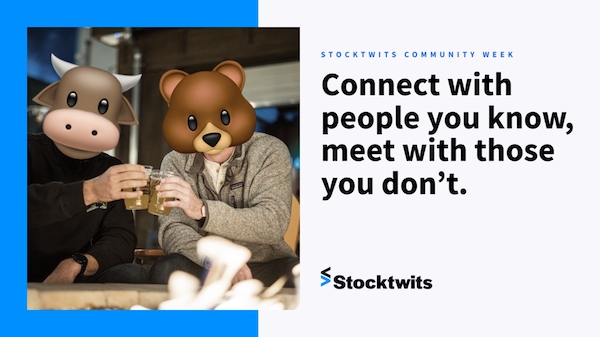 Stocktwits is expanding our online community to in-person events for local communities. Our first Community Week will be held in cities across the country the week of Dec. 6th, 2021. Meet with other Stocktwits users and people who share a passion for markets and investing in your neighborhood! You can expect to network and socialize with people who love Stocktwits and the markets just like you.

Turkey’s central bank is going a different direction than countries battling inflation after the Covid-19 pandemic. Instead of raising rates, Turkey is lowering them.

So far, that has been a recipe for disaster. The country’s inflation probs have only been exasperated by the rate cutes. The country’s currency, the Turkish lira (TRY), has been in rapid decline against the U.S. Dollar. In the chart below, what you’re seeing is what $1 USD is worth in TRY (as of today). As you can see, that figure has skyrocketed in the last few weeks: 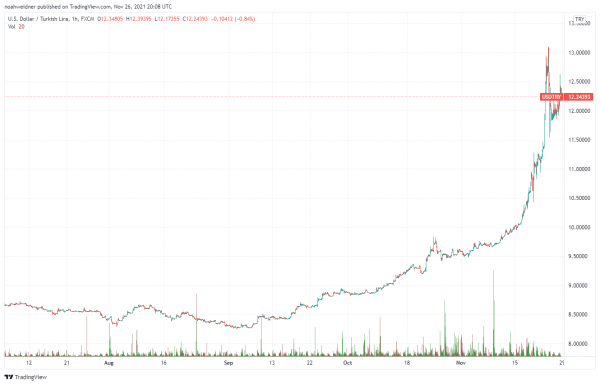 With this rapid debasement of the lira, coupled with Turkey’s 20% inflation rate, the country is in deep trouble.

Scores of Turkish citizens have taken to the streets in protest of President Recep Tayyip Erdogan’s policies. Unfortunately, the President and his political party are disaffected. A member of the Turkish ruling party suggested simply eating less: “We can buy two tomatoes instead of buying two kilograms. It’s not that healthy to eat forced crops during winter anyways.”

Earlier this week, he defended his policies, claiming that Turkey is waging an “economic war of independence.” If that’s the case, it’s fair to say they’re losing it. Turkish citizens are rapidly abandoning the lira for the Dollar and other currencies.

After posting beefy intraday gains yesterday, the crypto market fell back to Earth.

Crypto had two things going for it yesterday: 1) the stock market was closed, and certified degens cannot go a day without seeing $$gainz$$ … and 2) Americans had Thanksgiving, and Thanksgiving is basically just a bunch of sitting around while somebody complains about having to make a meal for 21 people. As a result, it’s fairly easy to see the fundamentals favoring crypto yesterday.

Unfortunately, the world is now over stuffing and turkey. They are now worried about bigger, more pressing things (i.e: the nine-trillionth new genre of Covid going on a world tour and the collapse of an entire country’s currency because of a political leader’s broke mentality.) Traditionally, crypto would be thought of as a safe haven from these kinds of concerns.

Today’s dip wiped out most coins’ 7-day gains. For assets like Bitcoin, it represents a decline into bear territory. Will it be able to get above the bearish headwinds?

The global crypto market cap was down 7.9%, according to CoinMarketCap.

💡 The Simon Abundance Index: A Visualization of Resource Abundance

🍄 Time To Fear the Fungi: Climate Change Is Causing a Rise In Dangerous Human Fungal Infections

💰 Cards Against Humanity Is Holding Another Anti-Black Friday, Giving Away $5 To The Masses

🚗 The 2022 Polestar Is More Appealing, Affordable, and Repairable

🎶 How The iPod Video Helped Save ‘The Office’

🎁 How Holiday Shoppers Feel about Inflation, the Supply Chain and Inventory