Good evening, ladies and gentlemen. 🌙 Happy Friday to ya.

Cerner scaled 12.93% to all-time highs following reports of a potential $30 billion acquisition by Oracle. $CERN is up 25.2% YTD. 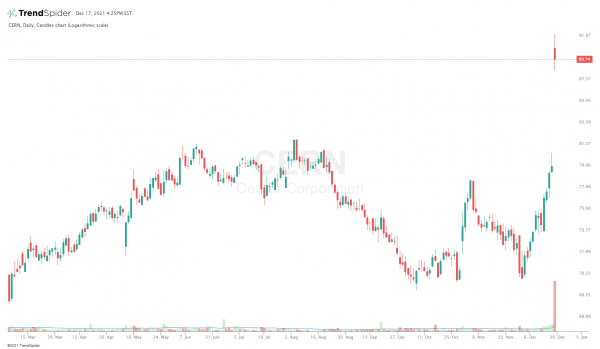 JPMorgan Chase will pay $200 million in fines to U.S. regulators for using WhatsApp to get around federal record-keeping laws. (*face palm*) $JPM took a 2.28% tumble.

Omicron on the Rise

Omicron is on the rise, and the U.S.’s largest cities are getting slammed with it.

New York City just reported its highest-ever number of Covid-19 cases at more than 21,000. The rate of Covid-positive tests also doubled to about 8% in the city in just a matter of days. According to the CDC, 13% of all Covid cases reported last week were Omicron infections.

William Lee is the VP of Science at a population-genomics company and shared that “It’s growing so much faster as a proportion of cases than any of the previous variants of concern did.” Lee also guessed the Omicron would be the dominant U.S. variant within a week.

Covid-related hospitalizations have increased 4% this week, with deaths up 8% week-over-week. Broadway shows, professional sporting events, and other gatherings have been postponed in response. That’s concerning for the recovery narrative, which was strong until Omicron started its world tour. 😔

Get a dose of this investment opportunity 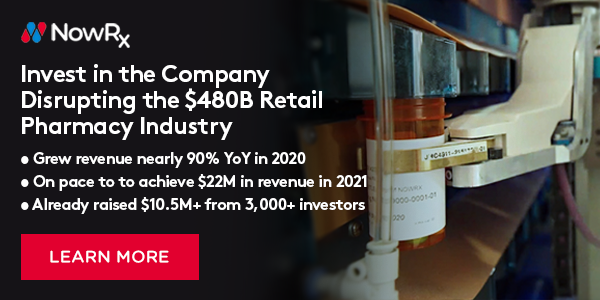 NowRx is disrupting the $480B retail pharmacy industry with free same day pharmacy delivery and unheard of customer service.

On pace to top more than $22M in revenue and with their newest telehealth product growing over 1,081% from Q1 to Q3 of this year, the time to invest has never been better.

Just one week after Digital World Acquisition Corp. announced that it was under investigation by the SEC and FINRA for possible insider trading, the SPAC got hit with a fraud lawsuit… 😳

Private equity investor Brian Shevland is suing the CEO of the blank check firm partnered with President Trump’s social media site, Truth Social. Shevland claims that Patrick Orlando, the CEO of $DWAC, committed a “brazen act of fraud” by denying Shevland access to thousands of shares and the opportunity to acquire more stock at low rates.

Shevland suggests that he should be able to purchase shares for $0.003 each as a remedy, much lower than the SPAC IPO price of $10 and the current price of $50.03. Whether or not Mr. Shevland will be granted his wish of shares for pennies on the dollar is a mystery. 💭

But we do know one thing. 💡 And that’s the fact that $DWAC is strong as h*ll despite its slew of bad news. $DWAC has drifted 404% higher since Oct 21, the day it announced news of its merger with Trump’s social media platform. Here’s the daily chart: 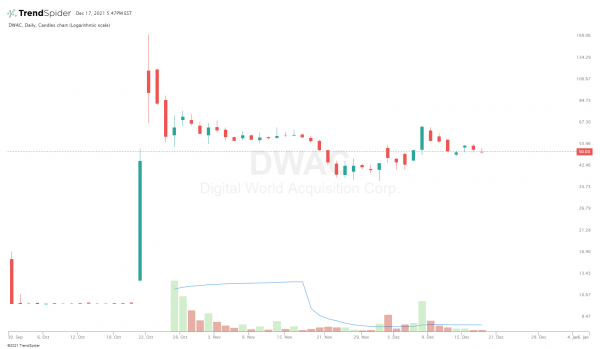 If Bitcoin was v1 and Ethereum was v2, then what is v3? 🤔 Analysts from institutions and scrappy retail investors have spent the entire year placing their bets on next-generation blockchains, which have considerable improvements in scalability over their predecessors.

We’ve already come to embrace names like Solana and Cardano as potential contenders. However, one analyst at Bank of America is placing a less-conventional bet in Avalanche, which claims to have “the fastest smart contracts platform in the blockchain industry.” Analyst Alkesh Shah suggests that Avalanche could be a meaningful (cheaper) alternative to Ethereum. 🤑

The crypto has gone on a tear this week, rising over 34% on renewed momentum from the BoFA report, the launch of USD Coin support on the blockchain’s mainnet, and support on crypto custodian BitGo. 🙌 The report is gauged as a bullish indicator. Support for USDC is a boost to the blockchain’s DeFi ambitions, and BitGo support likely upholds the narrative that institutions are interested in the blockchain’s potential.

We’ve covered Avalanche on its meteoric rise, especially during the launch of its Avalanche Rush liquidity mining event. Avalanche Rush offered over $180 million in rewards on Aave, Curve, and SushiSwap, which all launched on Avalanche to support its DeFi growth. Since then, the amount of liquidity on Avalanche has risen to over $16 billion, according to Markr.io. While that’s still a ways from the $100 billion in total value locked (TVL) on Ethereum, it exceeds the TVL of other scaling blockchains such as Solana, Fantom and Polygon. Avalanche has also accomplished that in a fraction of the time.

Read more crypto stories in TODAY’S EDITION OF our crypto newsletter, “The Litepaper”

Tesla, Rivian, Lucid Motors, and Ford are leading the Great Switch to electric vehicles — with the Biden Administration definitely on board, the U.S. begins to envision a post-oil society. However, the “oil” of this new age has already caused great controversy. Lithium, a resource necessary to make EV batteries, is causing an uproar among environmental activists.

Lithium Americas is one company that intends to mine lithium in the U.S. for electric vehicles. The company’s subsidiary, Lithium Nevada Corporation, drafted a proposal earlier this year to begin mining an extinct Nevada volcano. The U.S. Bureau of Land Management approved the proposal. Lithium Americas CEO Jonathan Evans said:

“It’s the largest-known lithium deposit in North America, so given where we’re going globally and as a country, it’s a unique opportunity.”

Mining is anticipated to begin in early 2022, but activists groups and tribal nations have been voicing their frustration over the project since far before its approval. 🚨 Three different lawsuits initiated by Native American tribes were struck down to maintain the mining operation. Meanwhile, environmentalists are camping at the Thacker Pass volcano site in Nevada to protest lithium mining.

Other pro-environment figures like Glenn Miller, a former professor of environmental science at the University of Nevada Reno, disagree with the protests. Miller thinks EV benefits outweigh mining costs. He commented:

“Radical environmentalists are going to argue that the only way to solve the climate change problem is to drive a whole lot less and to not burn gasoline or coal. Well, that’s not going to happen — the demands of society are set so we’re going to have to have an active transportation industry.”

We’ve covered rising lithium prices in the Rip before. Previously, we talked about how Asia currently pays nearly twice as much as it was last year for the prized metal. Lithium Americas could make considerable coin, even at lower prices in America (at least, as long as those prices last.) Lithium Americas estimates that the company will be be mining at Thacker Pass for 46 years, pulling billions worth of lithium out of the mine per year. 🔥

Here’s CNN with the full feature.

NFL will postpone games. Today’s theme is: Covid is back and ruining everything. It just so happens that it will be ruining a weekend of football. The National Football League announced it will postpone three games due to Covid’s resurgence. The games, which were planned for Saturday and Sunday, will be moved to Monday and Tuesday. We guess Monday and Tuesday Night Football fans won’t even blink an eye at the change. Read more in the NFL’s Press Release.

A Banksy NFT goes on sale. One of Banksy’s most famous pieces, “Gorilla in a Pink Mask,” is becoming an NFT. The owners plan to fractionalize the $1 million artwork on the blockchain, selling 10,000 copies at an estimated price of $750/piece. This basically means that the public will be able to own a share of the artwork and enter in a giveaway of another mural by Banksy. Read more in Hypebeast.

Southwest CEO tests positive for Covid. I can already hear you guys saying, “So what? Everyone is getting Covid.” Counterpoint: how many get Covid after testifying, unmasked, at a Senate hearing? That’s what happened with Southwest CEO Gary Kelly, and we’re not sure which one came first: the testifying or the Covid, which has the Senate on its heels. Covid exposure isn’t well-tolerated by older Americans (i.e. the kinds of people leading countries). Sooo we’re inclined to raise alarm about this exposure. Read more in CBS News.

🤦‍♀️ How Bad Can Inflation Be? Turkey Offers a Warning As Inflation Hits 21.3% in the Country.

🌎 The Man Behind the World’s Biggest Financial Fraud

😅 TikTok Made a Discord, So…Chaos?