Top of the evening, everyone. It’s Hump Day, but we only have one day remaining in the trading week.

Society Pass soared 53.43% on Wednesday, just days after exploding 240.18% thanks to its inclusion in the Russell 2000 Index. Here’s the springy daily chart: 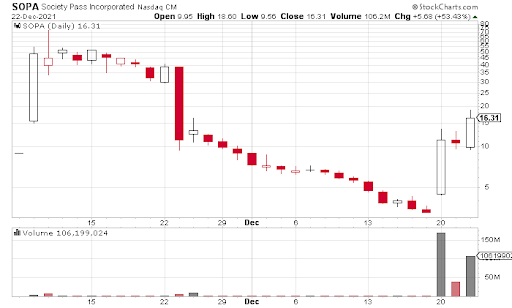 Each sector ETF ended the day in positive territory. 📈 Healthcare gained 1.17% and real estate rose 1%, both closing at record highs.

The Bureau of Economic Analysis’ newest estimate of Q3 U.S. gross domestic product (GDP) showed a 2.3% annual increase in economic activity, up from the 2.1% previously reported. Other than that, it was a pretty chill Wednesday for news. ❄️ ☃️

Here are the final quotes:

Pfizer’s Covid-19 pill, Paxlovid, just got FDA clearance today. The drug is the first Covid treatment in pill-form to get official clearance from the FDA. ✅

The medication is cleared for patients 12+ at high risk of hospitalization or death from the virus. Paxlovid can be taken within 5 days of the onset of mild to severe Covid-19 symptoms and was found to be 89% effective in preventing hospitalization for severe symptoms. Dr. Patrizia Cavazzoni of the FDA shared:

“Today’s authorization introduces the first treatment for COVID-19 that is in the form of a pill that is taken orally — a major step forward in the fight against this global pandemic. This authorization provides a new tool to combat COVID-19 at a crucial time in the pandemic as new variants emerge and promises to make antiviral treatment more accessible to patients who are at high risk for progression to severe COVID-19.”

The Biden Administration bought 10 million Paxlovid treatments for $5 billion, and is ready to start using them immediately. $PFE gained 1.02% today on the news. 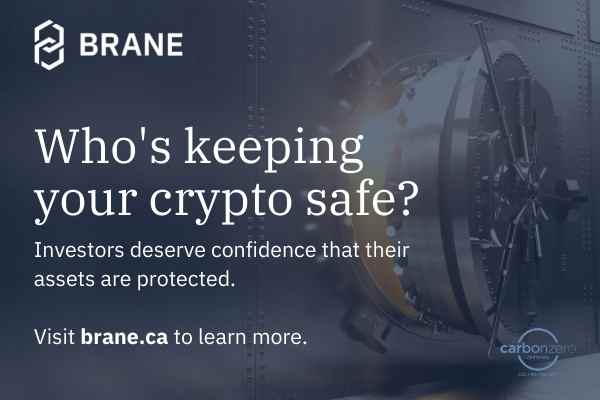 That’s where Brane comes in – with reliable, independent safekeeping solutions for the world’s new asset class. Brane is your trusted, independent partner for digital asset custody, leading the industry in security, ease of use, and expertise. Learn more at brane.ca.

The Biden Administration will extend the two-year pause on student loan payments until May 1, 2022, according to an announcement from the White House.

The May deadline is a 180 from the administration’s previous stance, which would have lifted the moratorium on Jan. 31. However, many Democrats have vehemently expressed their disagreement with the White House’s original January date and student debt repayment in general. The rise of Omicron and another slump in economic recovery prompted the change.

“[T]oday my Administration is extending the pause on federal student loan repayments for an additional 90 days — through May 1, 2022 — as we manage the ongoing pandemic and further strengthen our economic recovery.”

“Extending the pause will help millions of Americans make ends meet, especially as we overcome the Omicron variant. We continue to call on President Biden to take executive action to cancel $50,000 in student debt, which will help close the racial wealth gap for borrowers and accelerate our economic recovery.”

Do you have student debt? 💡 Here’s CNBC with what to expect once loan repayments resume.

Paychex popped 5.52% to all-time highs after exceeding 2nd quarter earnings and sales expectations. The Nasdaq-100 company also raised its earnings outlook for the quarter to come. 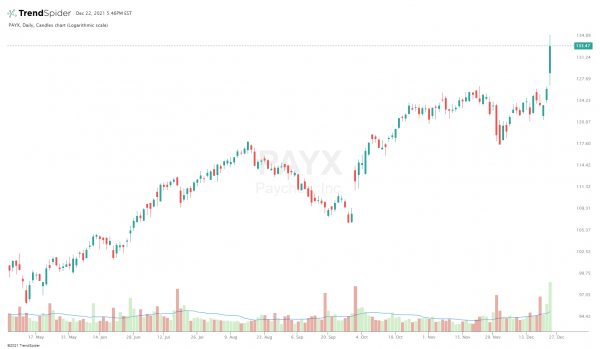 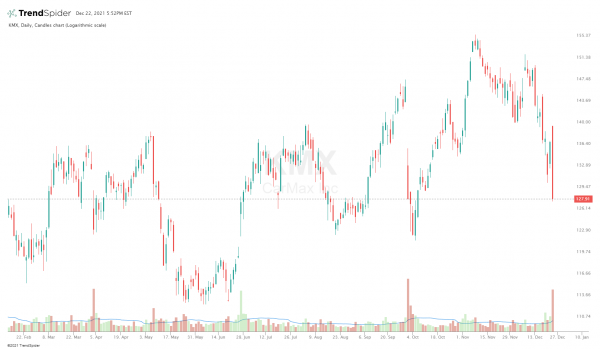 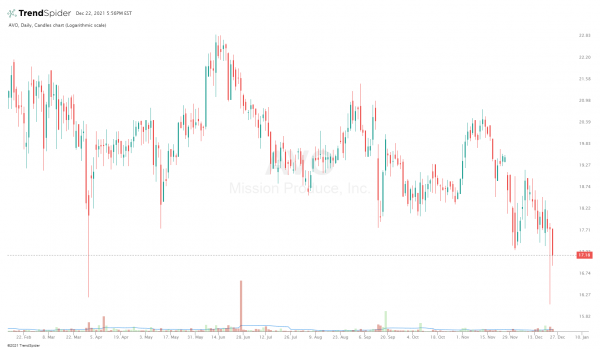 McConnell’s two cents for Manchin. Senator Mitch McConnell (R-Ky.) has an open invite for Joe Manchin (D-WV): jump the fence and join the GOP. Manchin announced he would oppose Joe Biden’s flagship Build Back Better legislation last week, adding to a weeks-long controversy involving the controversial West Virginian Senator. Manchin doesn’t support BBB because of his concerns about debt, deficit, and inflation. However, Manchin’s refusal to co-sign on the bill has resulted in downgrades by banks and financial firms as it pertains to GDP growth. Read more in Axios.

Tesla rallies as Musk wraps up sales. Elon Musk has finally sold 10% of his holdings in Tesla, putting an end to a serial selling campaign that depressed pricing in the EV automaker. Musk sold over $850 million worth of Tesla shares. On the news, Tesla stock rose to the tune of 7.5% in trading today, giving bulls something to cheer for. Read about it in Bloomberg.

Amazon workers walk at Chicago warehouses. After an Amazon warehouse in Illinois was hit by a tornado weeks ago, news about the company’s labor practices have started to surface once more. The news prompted a walkout at two Amazon facilities near Chicago, interrupting the company’s “busiest time of the year to demand better treatment and higher wages.” This is a continuation of the labor movement which has taken hold of large corporations during the pandemic. Read more about the walkout in TechCrunch.

🕵️‍♀️ The Hidden Background Noise That Can Catch Criminals

🥦 Simulating Vegetation in a Virtual World For A Thousand Years

⚠️ Lean Scene: The Turn-Up is Getting Dangerous