Hey everybody, and welcome back to the Market of Stocks. 📈 📉 Equities showed signs of weakness on the second day back.

Energy ETF $XLE expanded 3.46% after OPEC+ agreed to add 400K barrels per day to its output in February. Here’s the daily chart which cleared a recent consolidation to sit at three-year highs: 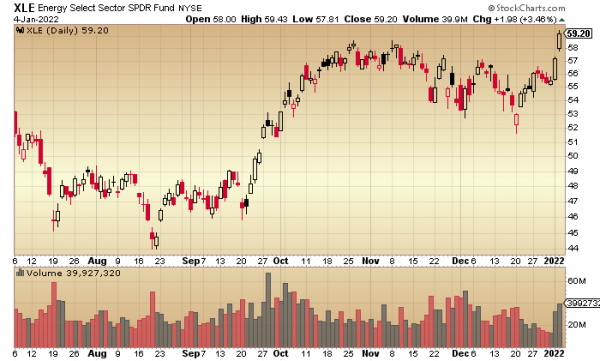 The 10-year Treasury yield rose 1.65% on top of yesterday’s advance, which may be bogging down growth stocks. 🙃

Ford was the arguably the strongest stock in the market today as the automaker’s shares surged 11.76% to all-time highs. 🚀 🚀

$F was high-flying after announcing plans to double production to 150K vehicles per year for its all-electric F-150 Lightning truck. The truck hasn’t even been delivered and it already has 200,000 reservations… ⚡

$F is up 17% YTD and we’re just two sessions into the year. Here’s the daily chart: 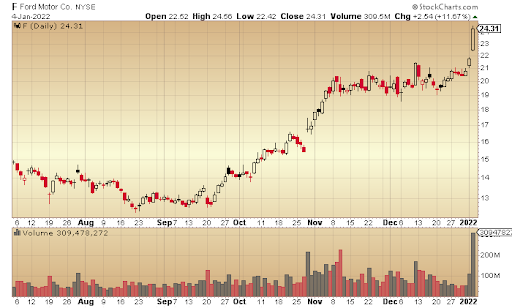 $GM advanced as the company increased the number of vehicles in transit to ~200,000 from 129,000 in October. GM’s CEO, Marry Barra, will also unveil the electric Silverado pickup tomorrow at the Consumer Electronics Show in Las Vegas. It’s anticipated that the truck will be available in early 2023. 😎 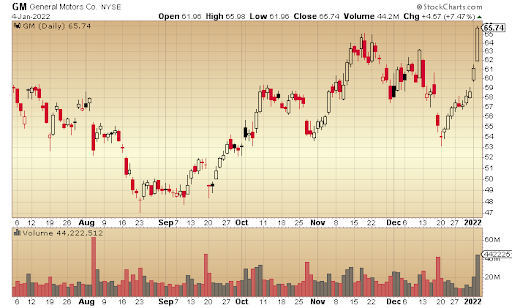 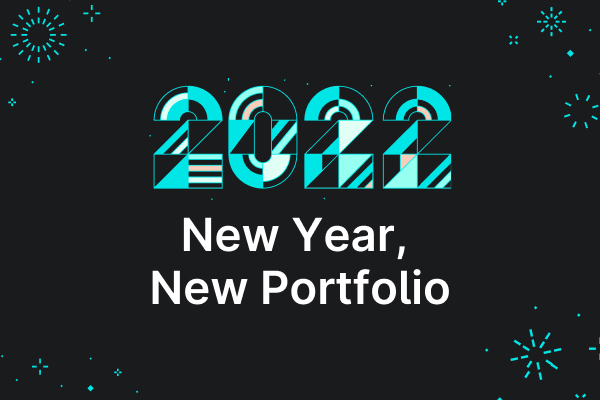 It’s 2022 – time to ditch the outdated investment strategies of the past. Yieldstreet allows you to invest beyond the stock market with a marketplace of alternative investments. Invest in real estate, art, venture capital, and more. Discover why 350k+ members have invested over $2B with Yieldstreet.

Justworks — the online platform for businesses which combines payroll, compliance, and benefits — updated its IPO filing today. The platform is targeting a multibillion-dollar valuation, the higher end of which is more than $2 billion. 💸

A couple of weeks ago, Justworks officially filed for its IPO. The announcement surfaced just as other tech companies, including Reddit and Samsara, announced their anticipated blockbuster debuts. In mid-2021, Gusto (another cloud HR/payroll company) also announced preparation for an upcoming IPO, securing a $9.5 billion valuation in the process.

According to TechCrunch, Justworks operates two key business segments. The first is its ‘subscription’ service, which encompasses “HR expertise, employment and benefit law compliance services, and other HR-related services.” The second segment is “benefits and insurance-related revenue.” In mid-December 2021, the company said that its revenue increased by more than 32% during the year ending May 31, 2021. Not too shabby.

Justworks was founded in 2012 by Isaac Oates and is associated with big-name investors like Bain Capital, Thrive Capital, and Index Ventures. In short, this is definitely an IPO to keep on your radar. 🚨

The U.S. Labor Department shared November’s job numbers today. The theme of the report was an increase in quit rates, accompanied by a decrease in available job openings. 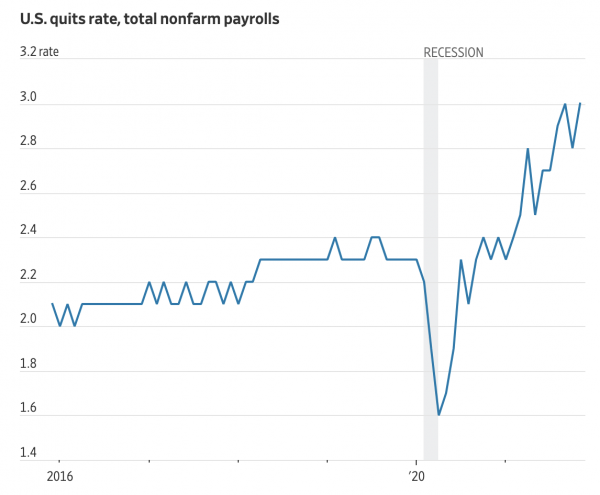 Another trend that continued in November was workers’ migration from previous jobs to new employment opportunities offering greater flexibility. Nick Bunker, a leading economist at Indeed, commented “The low-wage sectors directly impacted by the pandemic continued to be the source of much of the elevated quitting.”

It’s anticipated that job openings may slow in Q1 2022 due to Omicron’s spread. In particular, leisure and hospitality industries may experience increased quit rates/slowed growth due to the Omicron variant.

After telling employees that the company would not boost salaries to compensate for inflation, Google is raising its top executives’ salaries from $650K to $1 million. Google executives’ base pay will increase to $1 million for the company’s senior VP, chief financial officer, chief business officer, president of global affairs, and chief legal officer. It was announced that these C-Suite execs could “participate in a maximum $2,000,000 annual bonus program, based on contributions to Google’s performance against social and environmental goals for 2022.” Read more in the Verge.

Airline cancellations are still a disaster heading into 2022. Over the holidays, several major airlines such as Delta, JetBlue, and United canceled thousands of their flights, citing Omicron infections and snowstorms. Yesterday, over 3,200 flights were canceled on the East Coast and early this morning, 1,200 flights were canceled in the same region. Southwest Airlines canceled 10% of all its flights today. Read more in Associated Press.