The U.S. dollar dropped to a two-month low today. $DXY has closed negative three days in a row. Yikes.

The sectors traded mixed. Utilities and industrials continued higher for a second straight day while tech got slammed. 🥊

Bitcoin gave up all of yesterday’s gains as we near the impending death cross. 💀

TPG went public today, ringing in the first IPO of 2022. 🔔 TPG opened 12% above its offering price, valuing the company at $12 billion.

TPG announced it would sell its shares at the midpoint of its price range last night, which we reported to be $29.50. However, by the end of the day, the private equity firm had risen 15.3%, hitting $34.00/share. The company’s shares enjoyed those gains even amidst weakness in the Nasdaq Composite, which was down 2.5% today.

On some level, TPG’s IPO success might invite concerns that America’s IPO pipeline could freeze up during the Fed’s ongoing macro campaign. Major indexes have appreciated considerable corrections from their end-of-year prices, which has been enough to scare some companies from testing their own market debuts — namely Justworks, which decided to punt its IPO given concerns about the health of the markets. 👋

However, in fairness to Justworks and other companies, TPG is a diversified giant — and other P/E rivals like Blackstone and KKR have bested the S&P 500. Although TPG still has to prove its worth (the company only makes $109 billion in assets, a fraction of its competitors), the company’s success today indicates investors’ appetite for healthy risk in the markets. 📈

Hop in and join the conversation on the $TPG Stocktwits stream. 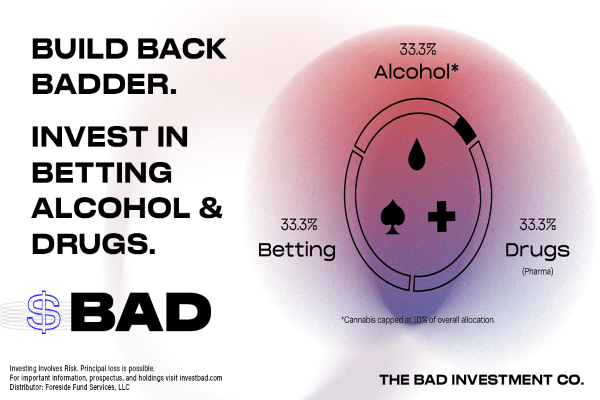 The new BAD ETF (NYSE: BAD) was launched this past December on the NYSE and while it may have BAD in its name, it might be a good option for investors in 2022 who may be looking for a safe haven from growth & tech stocks that have historically been negatively impacted by rising interest rates. $BAD

Taiwan Semiconductor handed down one of the first big earnings reports of Q4 today, showcasing the semiconductor giant’s fantastic end to 2021. 🙌

The company bested earnings and revenue estimates, delivering $1.15/share (vs. $1.12 estimated by FactSet analysts) and sales of $15.74 billion (just above the company’s expected range.) In other notable figures, the company’s operating margins improved by 0.5% to 41.7%.

$TSM also rose the bar for next quarter with expectations of generating $16.6-17.2 billion in revenue. That figure was reported despite the company’s expected tight capacity in 2022, mainly because of high demand. To combat the chip shortage, Taiwan Semiconductor indicated it would invest $40 billion to expand its chip capacity.💰💰

You may be unfamiliar with Taiwan Semiconductor (TSMC for short), but it’s the world’s largest foundry biz. In fact, it blows the competition out of the water. 🌊 In 2020, TSMC took home more than half of all semiconductor foundry revenue. That’s because the world’s largest brands rely on TSMC to craft their silicon: Apple, Intel, Qualcomm, AMD, Nvidia, and others are among the company’s clientele.

TSMC’s automotive biz has become a surprise sweet spot. Automotive is a small segment demonstrating big growth in recent quarters from other companies as well. In $TSM‘s case, the company reportedly took on a number of new contracts for automotive chip deliveries in 2022. Its automotive revenues jumped 10% YoY from Q4. 🚗

The positive earnings and outlook sent $TSM shares on a tear today as the stock came within inches of its all-time high. 🚀 🚀 TSMC closed the day up 5.26%, which valued the company at $725 billion. At this valuation, TSMC jumped over Nvidia and Berkshire Hathaway to become the 9th-biggest company in the world. 🌎 Sheeesh.

Although that upbeat earnings energy is unlikely to last, the company has help set the stage for continued outperformance from semiconductor companies in 5G, HPC, smartphone, IoT, and automotive industries. All-in-all, Taiwan Semiconductor has guided its long-term revenue growth to 15-20%/yr for the next several years. Other semis will likely follow in raising their own expectations.

Last Summer, the U.S. Food and Drug Administration (FDA) approved the first Alzheimer’s drug in nearly two decades… but its approval came with controversy rather than cheers. 👎 Biogen, the company behind the drug, is now sifting through the rubble of a failed launch effort. What Biogen hoped would make a fortune could cost them billions.

That’s because no insurance companies want to cover Aduhelm, which launched at the steep price of $56,000/patient/yr. The drug, which was granted accelerated approval while Biogen conducted additional efficacy studies, reportedly caused bleeding or swelling in the brains of 41% of patients. That bad press caused the drug’s creator to cut prices in half, but that might not even be enough. Biogen reportedly made just $300,000 in Aduhelm sales from July to September 2021, which was down from $1.6 million in the quarter before.

Medicare officials aim to crush Biogen’s Alzheimer’s pipe dream by restricting coverage of the new drug. That decision means the agency would cover the costs for patients participating in “approved clinical trials“,  but Medicare will restrict coverage beyond that. The federal health insurance program cited doubts about the drug’s safety and benefits. If Biogen cannot clear clinical hurdles (or change the government’s mind), then Aduhelm will become the company’s biggest paperweight in recent history. 😬 Right now, Biogen is waiting for Medicare to issue its final decision.

However, Biogen has reportedly asked Goldman Sachs to help form a backup plan… an escape hatch, if you will. According to Stat News, Biogen is working with the investment bank to field potential acquisition targets. Among the reported names were Aurinia, Biohaven, and Amylyx. Aurinia jumped to the #1 trending stream on Stocktwits for a bit this afternoon, maintaining its trending activity into the evening. 🌙 The names also appeared in Betaville in support of the news.

Biogen’s ongoing post-approval study might table people’s reservations about the drug. But considering persistent sentiment surrounding Aduhelm, the so-called “phase 4 study” has a lot of work to do. At this point, with $BIIB down 15.6% in the last year, M&A might be the only ‘quick fix’ to the company’s earnings misses.

Navient, a private student loan agency, just announced that it will cancel the loans of 66,000 different borrowers — the amount of loans forgiven totals $1.7 billion.

Navient will forgive the privately-issued loans in an agreement with the attorney generals of 40 different states. Navient’s move will avoid six lawsuits against the lender claiming that the company engaged in deceptive lending practices. Navient will make a $145 million payment to the states involved in the settlement.

Navient’s Chief Legal Officer, Mark Heleen, said: “The company’s decision to resolve these matters, which were based on unfounded claims, allows us to avoid the additional burden, expense, time and distraction to prevail in court.” If you can’t speak legal/PR, we’re pretty sure this means Navient paying up is cheaper than the costs of a prolonged court battle. 😅

The loans involved in Navient’s forgiveness were issued between 2002 and 2010 and have since defaulted. Josh Shapiro, Pennsylvania’s Attorney General, commented:

“Navient repeatedly and deliberately put profits ahead of its borrowers—it engaged in deceptive and abusive practices, targeted students who it knew would struggle to pay loans back, and placed an unfair burden on people trying to improve their lives through education.”

Navient is also awarding restitution to federal borrowers whose loans resulted in higher-than-necessary debt accumulation. While Navient pays restitution to those borrowers in addition to settlement costs, the Biden Administration has terminated its partnership with private agencies which collect repayments from federal student loan recipients.

$NAVI stock traded sideways today, ended the day +37 bips. Could Navient’s settlement be an indicator of more investigations to come?? 🤔 Here’s the WSJ with more.

Jan. 6 committee subpoenas Big Tech. The House select committee investigating the deadly Jan. 6 Capitol riot has reportedly subpoenaed Big Tech companies such as Twitter, Reddit, Facebook, and Google in an effort to unearth information pertaining to the event. The news comes on the heels of the Justice Department’s indictment of far-right militiamen. Read more in CNBC.

Users of Venmo, Etsy, and Airbnb will now be taxed if they receive payments over $600 for commercial purposes. Venmo clarified that individuals using its platform to send money to friends/family will not be taxed. With that being said, many small business owners using these platforms are outraged, especially after 5.4 million Americans applied to start their own online businesses with these platforms in 2021. Meanwhile, the IRS has started 2022 in crisis as it rolls over millions of unprocessed tax returns from prior years, keeping impatient taxpayers waiting even longer. Read more in Bloomberg.

The Supreme Court has blocked the Biden Administration’s OSHA Covid vaccine mandate for large private businesses. The ruling claims that the Biden Administration does not have ‘unilateral power’ to enforce testing and vaccine mandates in businesses fulfilling private-employer requirements. The ruling does not, however, apply to the healthcare industry. Healthcare workers may still be subject to federal vaccine mandates if workers participate in Medicare and Medicaid. Read more in WSJ.

A Tough Time for Peloton

Good evening, y’all! It’s already mid-week and the market is worn out. 😪

SoFi Technologies soared 13.7% after the fintech company received its regulatory license to become a national bank. 🥂 $SOFI is still down 13.22% YTD. Here’s the daily chart: