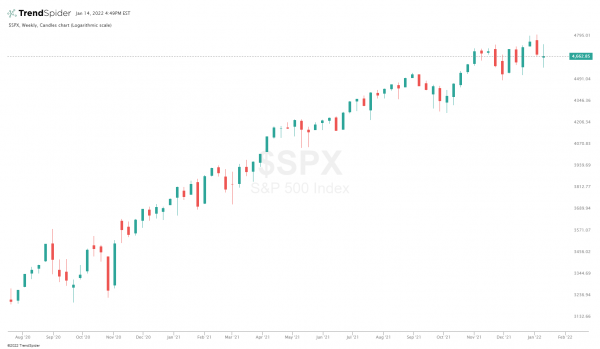 The energy ETF $XLE extended 2.35% and closed the week at highs. ⚡ Financials and real estate both dipped more than 1%.

Big banks reported earnings and the reactions were mixed. 🤷 Check out the earnings section for more data and charts.

Dogecoin soared as high as 28% today after Elon Musk tweeted that it may exclusively be used to purchase Tesla merchandise. 🐶 $DOGE.X is now up 10.55%.

Retail sales fell 1.9% last month, there’s still a huge labor shortage going on, and companies are turning to “shrinkflation” in an effort to keep customers. 😬

Retail sales tumbled 1.9% in December, an indication that inflation and labor shortages affected consumer behavior during the holidays. Analysts predicted a 0% change in retail sales for December, but the -1.9% miss could imply that consumers purchased less during the holidays or purchased items earlier in the season. Additionally, the consumer sentiment index — a measurement of consumers’ confidence about the state of the economy and their personal finances —  fell to its second-lowest level ever last month. In the words of Jeffries economists Aneta Markowska and Thomas Simons, “This is clearly not a great start to 2022.”

According to Axios, U.S. CEOs suggest labor shortages are the biggest threat to their businesses in 2022. Axios also broke down the nation’s worker shortages by demographic, explaining that spiked retirement rates, fewer working immigrants, and 1.5 million fewer moms in the workforce during the pandemic have fueled the tight labor supply. 📉

As inflation (+7% YoY in December 2021) continues to plague the U.S. economy, companies are desperately trying to keep customers without raising prices. One way businesses are doing that involves “shrinkflation,” or the reduction of quantity sold. For example, Dominoes Pizza just announced that it will only offer 8 chicken wings in its $7.99 deal, a reduction from the original 10 wings for $7.99. Nonetheless, price increases are inevitable in many cases. According to S&P Global Market Intelligence, 52% of U.S. businesses “expect prices of their products to continue rising in 2022.”

At the end of the day, in light of these troubling economic conditions, all we can do is remain optimistic for the future. 🤞 After all, only time will tell… ⏳ 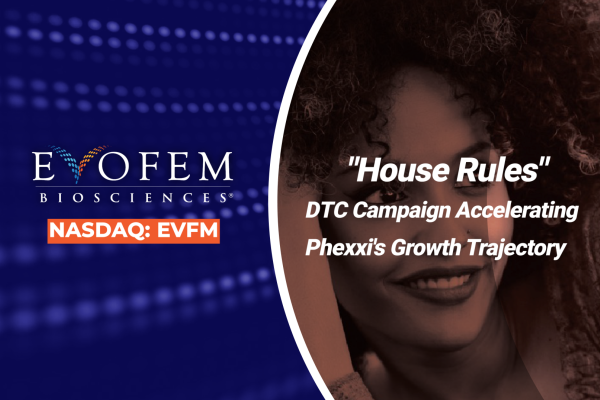 For the six weeks after its celebrity DTC campaign launch, Evofem Biosciences (Nasdaq: EVFM) reported more than 10,000 new prescriptions – a 94% increase vs the prior six-week period – and total prescriptions grew to 13,000.

Big banks experienced massive growth during the pandemic thanks to an explosion of deals, high volatility, and an ultra-hot housing market. 🔥 🔥 It looks like that growth is finally catching up to them, however — JPMorgan, Citibank, and Wells Fargo reported earnings today, and Q4 2021 didn’t look great for some of America’s biggest banks. 🤷

Thankfully for Wells Fargo, the bank beat Q4 earnings and sales expectations with ease before the market opened. Wells Fargo’s earnings made it one of few big banks that traded green today. 🍀 Wells Fargo’s net income grew 86% YoY. $WFC is now up 21% YTD. 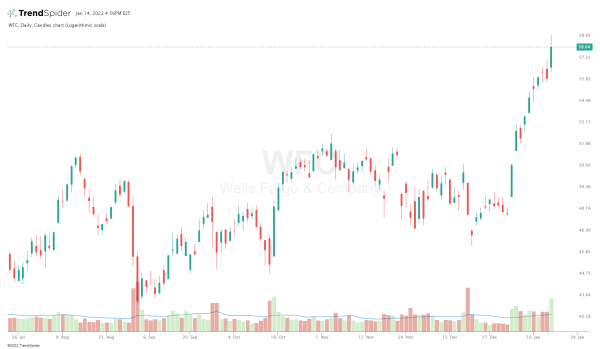 JPMorgan Chase collapsed 6.15% after its CFO lowered guidance due to higher expenses. Yikes. The bank shared that its slowed Q4 growth would likely reduce profitability throughout 2022, and potentially into 2023. JPM’s trading revenue also declined by 11%. JPMorgan’s finance chief Jeremy Barnum commented “We are in for a couple of years of sub-target returns.” 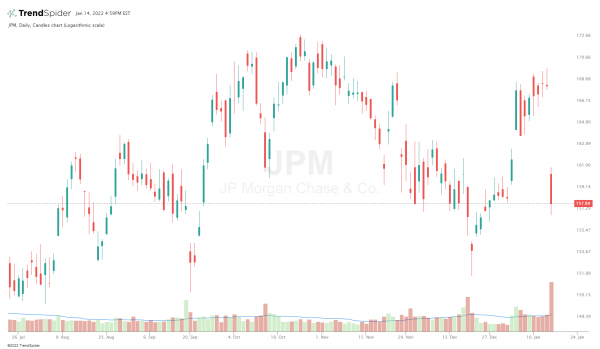 Citigroup’s net income plummeted 26% in the fourth quarter due to increased expenses. Citi’s trading revenue fell by 17%, and $C dropped 1.25% today. Regarding Citi’s future, the bank’s CEO Jane Fraser said “We certainly hope Omicron is the final disruptive phase of this pandemic, but there are also quite a few other issues to navigate.” 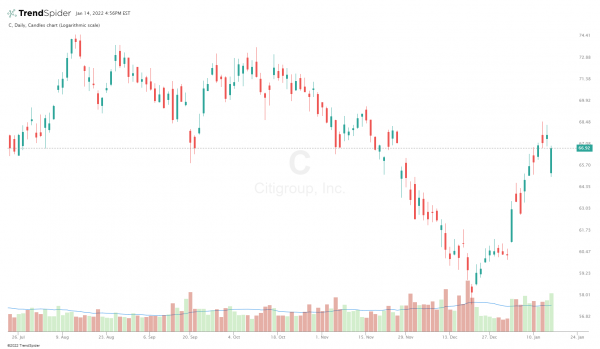 U.S. Intelligence hints that Russia could invade Ukraine in the next 30 days. White House press secretary Jen Psaki shared that the U.S. has observed an increase in Russia’s attempts to spread cyber disinformation in Ukraine — an indicator that Russia is trying to politically destabilize Ukraine. The homepages to Ukraine’s government websites were replaced with “Be afraid and expect the worst. This is for your past, present and future,” a message from Russian cyber operatives. Currently, there are 200,000 Russian troops at the Ukrainian border. Read more in CNBC.

China’s making moves in the autonomous vehicle space. China is home to many autonomous vehicle startups, including AutoX, Baidu, Deeproute.ai, Didi, Momenta, Pony.ai and WeRide. The country is ready to begin testing driverless vehicles with passengers in an effort to continue automation of its transportation industry. Read more in TechCrunch.

Some Tesla merch is only buyable with Dogecoin. It was announced last month that some Tesla merch would be available for purchase with Dogecoin… but now, Doge is the only accepted crypto for a couple of Tesla’s products. Tesla’s Gigi Texas Belt Buckle and the Cyberquad for Kids can only be purchased with Doge, costing $160 USD and $2,300 USD, respectively. Read more in Mashable.

Polish scientists may have discovered a gene which doubles risk of dying from Covid-19. Warsaw’s Health Ministry has conducted genetic screening among severely ill Covid patients. The country’s scientists found that the presence of one gene is the most important factor after age, weight, and gender in determining the severity of Covid symptoms. The gene is supposedly present in 14% of the Polish population, 9% of the European population, and 27% India’s population. Read more in Bloomberg.

💭 Are We Bullish Enough?

👜 Are Handbags the New Stocks?

🌿 Craft Cannabis Industry in California Is ‘On the Brink of Collapse’

A Tough Time for Peloton

Good evening, y’all! It’s already mid-week and the market is worn out. 😪

SoFi Technologies soared 13.7% after the fintech company received its regulatory license to become a national bank. 🥂 $SOFI is still down 13.22% YTD. Here’s the daily chart: