So You’re Saying There’s A Chance…

The market had good vibes to start the week — here’s what you missed.

Goldman Sachs, Cathie Wood, and others warned of potential recession as economic data softened…some with very precise forecasts. More on that below. 🔮

If you’re craving some food news, Kellogg, Krispy Kreme, and Mondelez made headlines today. We outline why in our second story. 😋 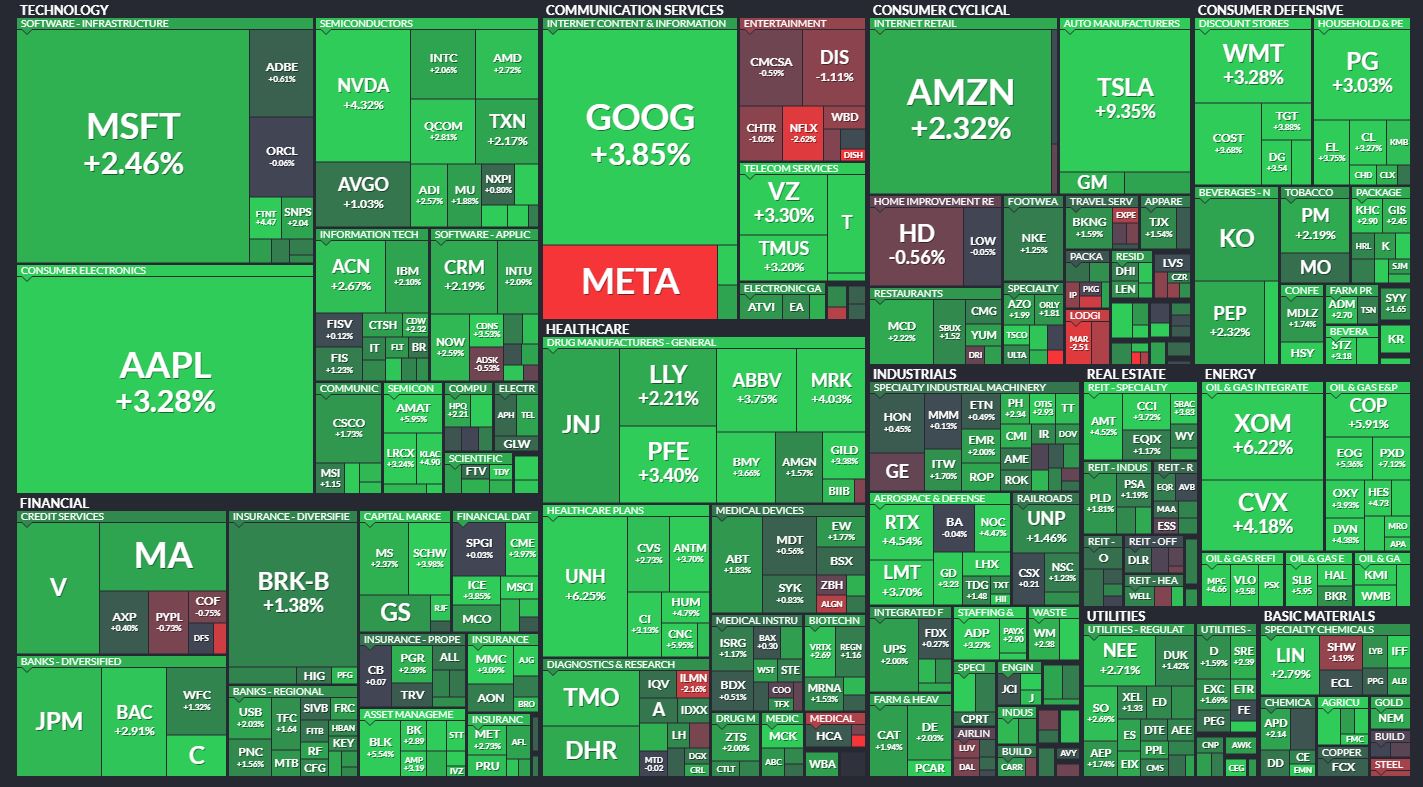 Meanwhile, Meta was in the news after settling with the Department of Justice over a housing advertising system that illegally discriminated against users based on race and other characteristics.

In earnings news, homebuilder Lennar warned of a housing slowdown as affordability and rising rates hurt demand. However, the company still beat the top and bottom lines, with earnings of $4.49 per share vs. $3.96 expected and $8.36 billion in revenue vs. $8.08 expected. $LEN shares rallied 1.58%. 🏘️

$LAZ shares rallied 11.75% in extended hours after the residential furniture retailer beat on the top and bottom lines. Earnings per share of $1.07 beat expectations by $0.15, and revenue clocked in at $684.57 million, exceeding expectations by $19.66 million. 📈

In airline news, JetBlue raised its offer for Spirit Airlines again, and superjumbo A380 planes are making a comeback as airlines scramble to meet strong demand. ✈️

Selling in crypto slowed over the last few days as FTX and founder Sam Bankman-Fried supported other firms in an attempt to stem contagion fears. 😰

If your portfolio didn’t feel any relief today, rest easy knowing we’re only eight trading days away from another 3-day weekend. 😂

A 48% Chance Of Recession

The recession forecasts continue this time, with Goldman Sachs saying it sees a 48% cumulative recession probability over the next two years. But, again, this is up significantly from its previous “guess” of 35%.

Even retail favorite Cathie Wood is joining the party, warning that the Fed is ignoring dangerous signals and that its aggressive rate hikes risk plunging the U.S. into a recession. ⚠️

Clearly, recession worries are everywhere, from the forecasts of central bankers/government officials/Wall Street firms and economic data to media outlets like the N.Y. Post.

Chicago Fed’s National Activity Index edged lower in May, though still buoyed by solid demand in the manufacturing sector. 📉

While we may not have a crystal ball like the economists at Goldman Sachs and other Wall Street firms, the recent market action continues to price in high inflation and weaker economic growth.

So far, there’s not been a lot of data to suggest otherwise, so we’ll have to rely on the crystal balls’ forecast for now. And it doesn’t look good. 🔮

You have 3 days left to invest in the robots invading fastfood kitchens.

Their profit margins are as low as 3% on a typical day. And now, a mass labor exodus threatens to knock them into the red.

But the biggest names in fastfood see this coming, and they’re acting fast by hiring autonomous kitchen assistants from Miso Robotics.

These kitchen bots can boost restaurant profit margins by 3X. That’s why top brands like Jack in the Box and White Castle are teaming up with Miso to bring cooking and drink-pouring tech to the mainstream.

Get shares in Miso before the June 23rd cutoff.

Kellogg’s is joining a growing trend among big-name companies, splitting its business into three distinct companies focused on cereals, snacks, and plant-based foods. 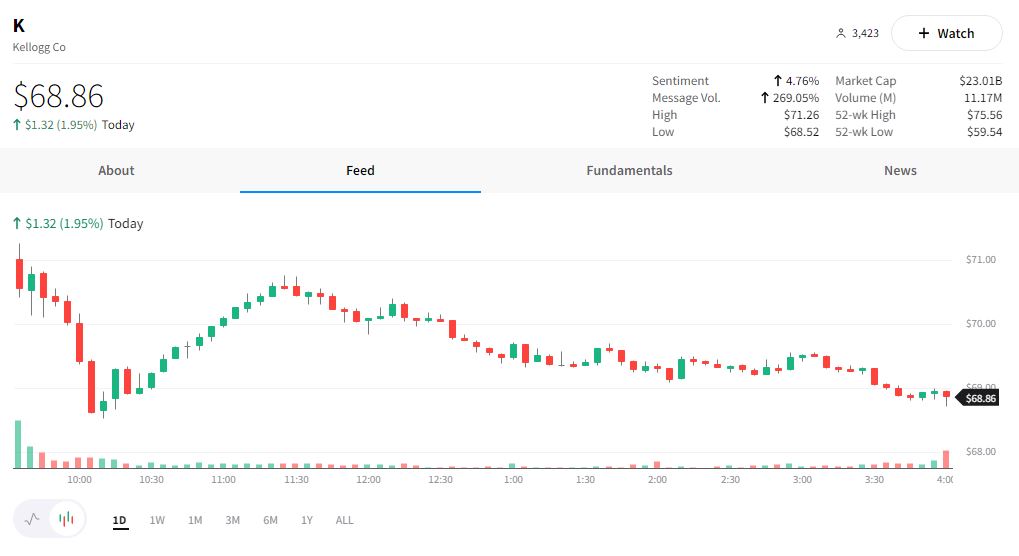 Mondelez is buying Clif Bar & Company for $2.9 billion to expand its global snack bar business. The acquisition marks the ninth deal for Mondelez since 2018, as it continues to rework its portfolio for longer-term growth. $MDLZ shares were up 1.74% today on the news. 📈

Krispy Kreme is rolling out a new soft-serve ice cream product at select stores?!? $DNUT shares were up 2.18% today with the broader market, but we had to share this news with our ice cream lovers who may be in the product’s test markets of Virginia and North Carolina. 🍦

🧰 Meta launches a new suite of Facebook/Instagram monetization tools. The company is rolling out more ways for creators to make money on their platforms and expanding some of its current tools to a larger pool of creators. Several features will remain free until 2024, a year longer than the company’s previous plan. As competition in the creator economy heats up, companies like Meta have to do more to entice creators to stay on their platform. TechCrunch has more.

💰 FTX offers a lifeline to struggling crypto firms. BlockFi, a crypto lending platform, announced that it secured a $250 million revolving credit facility from FTX to bolster its balance sheet and platform strength. Market volatility is proving to be a challenge for many platforms, particularly as contagion fears spread throughout the market. Read more from Coindesk.

❌ U.K.’s biggest rail strike in 30 years kicked off on Tuesday. Forty-thousand workers across thirteen train operators are striking across the U.K., causing severe travel disruptions throughout the country as only 20% of rail services were operating. The strike comes as public sector workers and the government face a stalemate about salary, as the country faces its worst cost-of-living crisis in decades due to soaring inflation. More from CNBC.

🦄 NFT marketplace Magic Eden reaches unicorn status. Despite a troubling market environment, Magic Eden has pulled a rabbit out of a hat with a new $130 million Series B round. This fundraising round, which values the nine-month-old company at $1.6 billion, was co-led by Electric Capital and Greylock Partners. TechCrunch has more.

₿ Want to bet against Bitcoin? There’s now an ETF for that. A new inverse ETF by ProShares launched Tuesday under the ticker symbol “BITI,” giving traders a vehicle to bet against the price of Bitcoin. With the move coming eight months after it established the first U.S. bitcoin futures ETF, we’ll have to see if its timing is any better this time or if it could be a contrarian signal. More from CNBC.

🚗 Uber brings back its carpool service after pandemic pause

🏈 Gronkowski retires for second time in his career