Welcome back to reality, folks — here’s what you missed.

Stocks gapped down before reversing to the upside as European markets closed, led by the technology sector. ⏪

Commodities took it on the chin today as Crude Oil broke below $100/barrel on recession fears — more on that below. 🛢️ 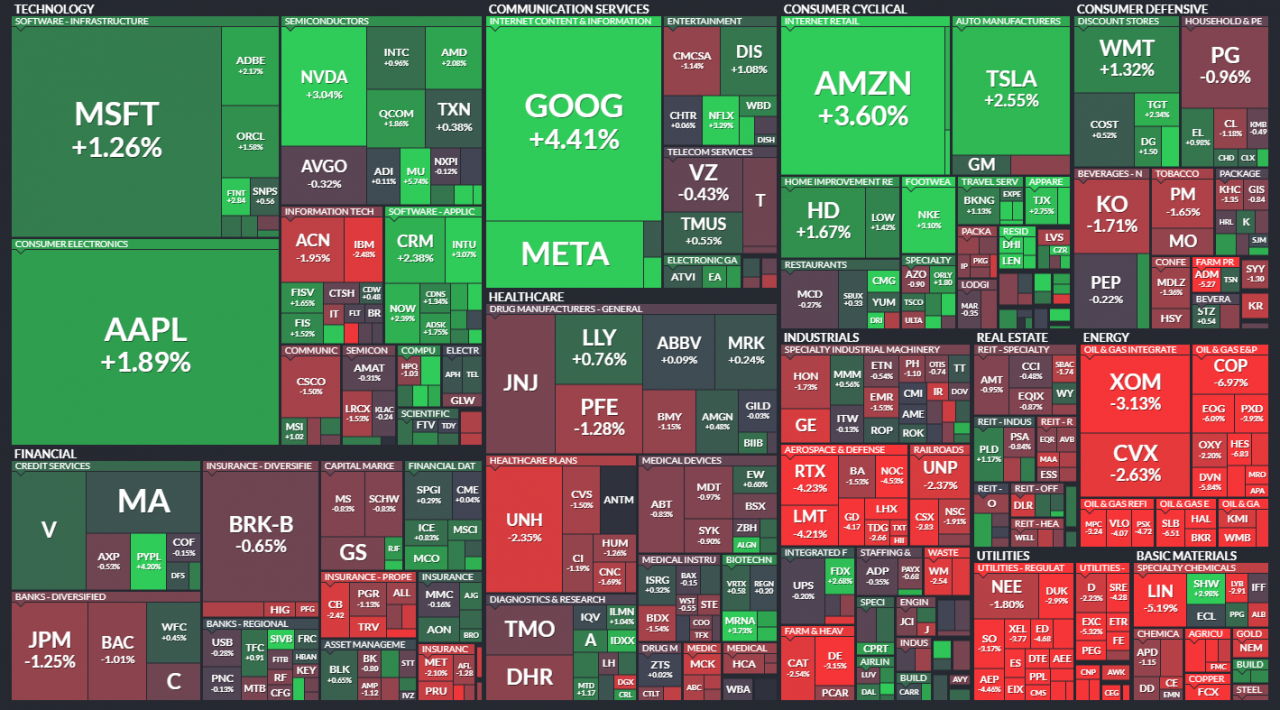 In international news, companies continue their exit from Russia. Yum Brands is close to selling its Russian KFC business, and Ikea is clearing inventory with an online sale before exiting Russia entirely. Meanwhile, Finland and Sweden sign to join NATO but await ratification. 🌐

The global fight against inflation continues, with the Reserve Bank of Australia hiking its benchmark interest rate by another 50 bps. Europe’s energy problems continue, this time as several Norwegian gas fields close amid worker strikes. That won’t help their inflation numbers…🥵

Meanwhile, the U.S. Dollar continues its rally, nearly approaching parity with the Euro, as the global flight to safety continues. 💵

In single stock news, Amylyx rallied as much as 19% today on news that the FDA will reconvene the discussion about its ALS drug. However, the pop faded throughout the day, with $AMLX shares closing up just 0.15%.

Faraday Future Intelligent Electric Inc. rallied 48.73% on no news, though traders speculate that a short squeeze is taking place. 📈

In crypto news, the major coins rebounded along with stocks and other risk assets. Additionally, crypto lender Nexo plans to buy fellow lender Vauld, and the ex-TikTok gaming head is launching a new blockchain games startup. Lastly, if there were ever any hope for a bottom in the space, Jim Cramer saying crypto has no real value may be it. ₿

Despite all the fear-mongering about the U.S. Dollar losing its status as the global reserve currency, it continues to trend higher relative to many other foreign currencies. 😱

As the global battle against inflation rages on and recession fears rise, market participants continue to find safety in U.S. Dollars. Given that real interest rates in the U.S. are higher than many alternatives around the world, demand for dollars remains strong. 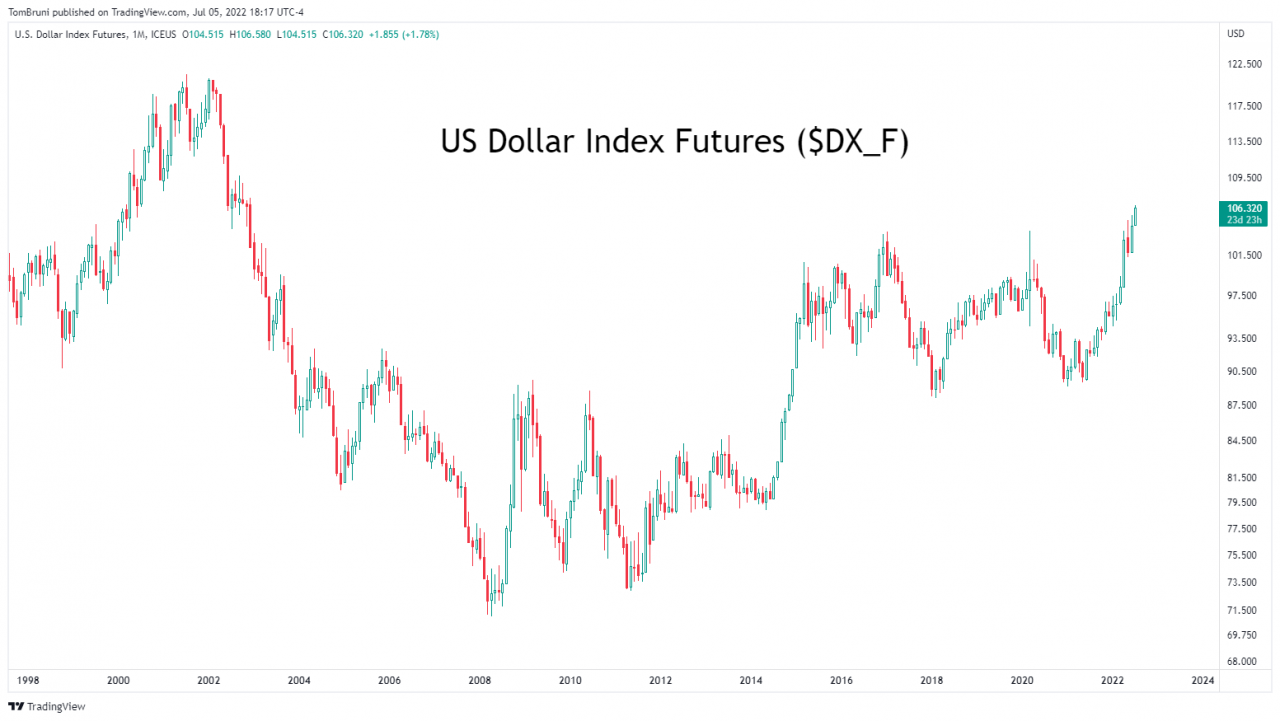 As a reminder, this futures index is heavily weighted towards the Euro. Still, it is often used as a quick barometer to see how the U.S. Dollar is performing versus other developed currencies.

And on that note, the Euro/U.S. Dollar pair is approaching parity (1:1 conversion) for the first time in about twenty years. 💱

And lastly, the so-called “best inflation hedges” Gold and Bitcoin are sitting at their lowest level of the year. 📉

In the face of all the “U.S. Dollar and cash are trash” rhetoric, it seems to be working pretty well this year compared to most alternatives. 👍

Commodities were the best performing asset class in the year’s first half, but some cracks are beginning to form in the “commodity supercycle” thesis. 📉

Today crude oil broke back below $100/barrel, with gasoline, heating oil, and natural gas trading well below their highs. 🛢️

“Dr. Copper,” which many use to forecast the economy, is working on its fifth consecutive weekly decline and trading at levels not seen since November 2020. 🏭

Corn, soybeans, wheat, and several other agricultural commodities have declined by 20%+ in recent weeks. 🚜

Supply has improved in several cases, but much of the recent declines have come on the fear that demand will drop drastically in a recession.

It seems like everyone is talking about a recession these days. Today the Bank of England told lenders to “brace for an economic storm.” ⛈️

And while many had hoped commodity prices would come down, prices falling due to a recession and massive drop-off in demand is not the ideal path. 👎

We’ll see how these trends play out in the coming weeks and months.

The debate remains whether these are sharp pullbacks within a secular trend higher in commodity prices. Or if we’ve indeed seen a meaningful peak in many of them. 🤔

Since we’re all just guessing anyway, head over to the streams and let us know your thoughts! 💭

🔬 AstraZeneca goes shopping in Biotech space. The pharmaceutical giant has agreed to acquire biotech firm TeneoTwo Inc. in a deal worth up to $1.27 billion. The company will acquire all outstanding equity for an upfront payment of $100 million, with additional milestone-related payments of up to $1.17 billion. The acquisition will bolster AstraZeneca’s roster of therapies to treat blood cancers. Read more from Reuters.

❌ Two senior U.K officials resign. The U.K.’s health and finance ministers announced their resignations in a protest against Prime Minister Boris Johnson’s leadership, just weeks after he narrowly survived a vote of confidence. The British Pound/U.S. Dollar pair continues to march towards its 2020 lows, hitting a fresh low today. CNBC has more.

🚗 Ford sales outpace industry peers. Second-quarter sales rose 1.8% YoY, missing analyst expectations but outperforming forecasts for an industry-wide decline in sales of 19%-21%. In addition, the company’s F-Series pickups sales of 57,673 units in June were their highest monthly total of 2022, and sales of electric vehicles jumped 76.6% YoY in June. More from CNBC.

💊 U.S. drug distributors win a major opioid case. A federal judge ruled that major U.S. drug distributors McKesson Corp., AmerisourceBergen Corp., and Cardinal Health Inc. are not responsible for fueling an opioid epidemic in part of West Virginia. As a result, the judge rejected efforts to have these three companies pay $2.5 billion to address the drug crisis in the city of Huntington and Cabell County. The case is just one of many seeking to hold companies responsible for the opioid abuse epidemic throughout the country. Reuters has more.

💰 EU looks to fund deep-tech start-ups. The European Union Is looking to attract 45 billion Euros in private funding for “deep-tech” start-ups based on significant scientific or engineering advances. The measures come as the region looks to cut the cost of stock market listings and implement other measures to attract capital and innovation. More from Reuters.

🧲 Physicists are startled by this magnetic materials that ‘freezes’ when heated

🥵 Fitness crisis? Only 7% of U.S. adults have good cardiometabolic health

💍 Ultrahuman busts out a smart ring to decode metabolic health

🥪 Subway to give away free sandwiches, as the franchise launches new menu