Jobs were in focus, coming in red hot during July and pushing the Fed further between a rock and a hard place. We explain why a strong labor market may be interpreted as bad news for the stock market below. 👷 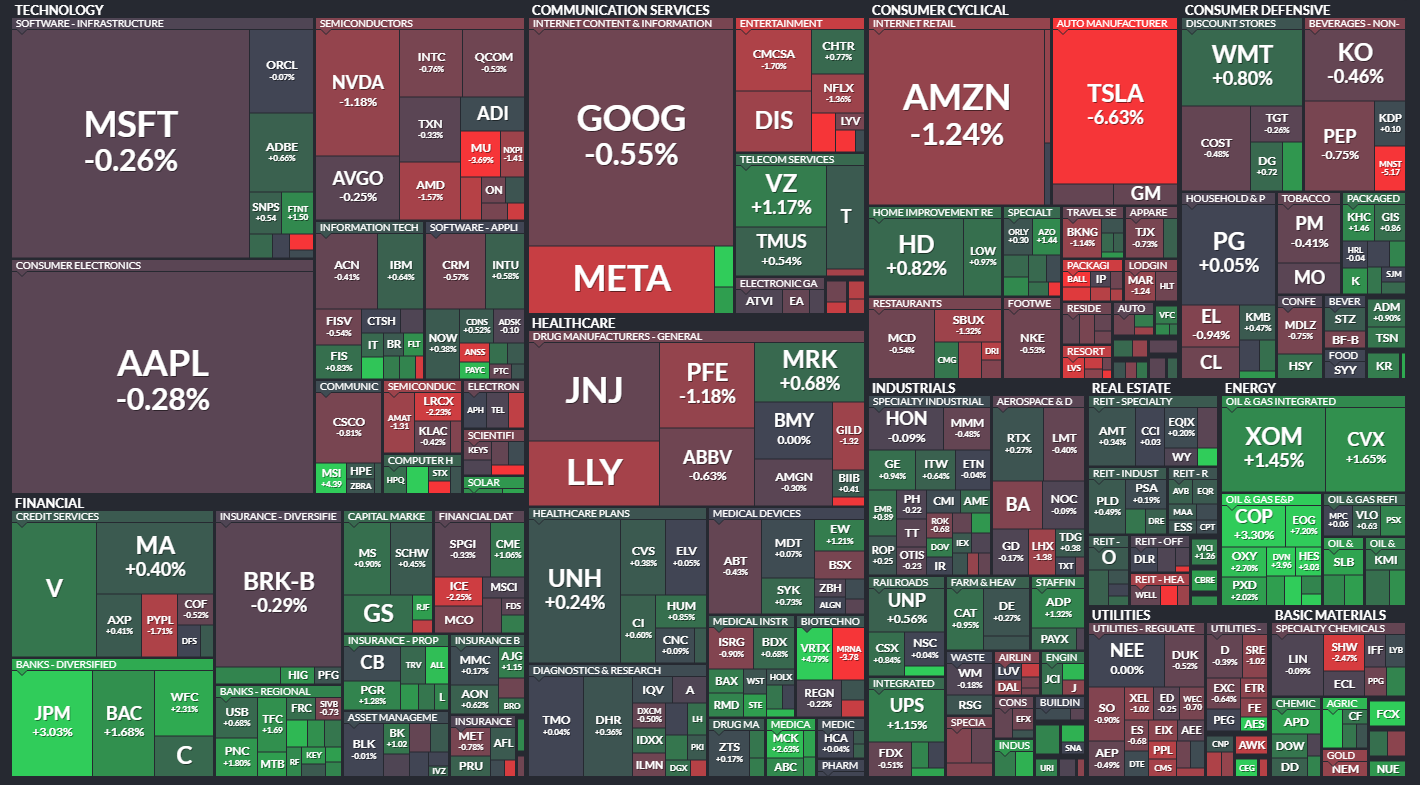 Additionally, the Reserve Bank of India hiked rates for the third straight time, saying that 50 bps is the “new normal.” Lastly, tensions between China and Taiwan continue, sparking an alert in Japan. ⚠️

In U.S. political news, the senate has agreed on the Inflation Reduction Act. Notably, Wall Street firms were happy to learn about the scrapping of a carried interest tax provision designed to close the loophole. However, a new excise tax on stock buybacks replaced it, so it’s a mixed bag overall.

In individual company news, Alibaba (-5.01%) gave back its post-earnings pop as investors rethink its ‘turnaround story.’ 📉

Tesla (-6.63%) shareholders approved its 3:1 stock split. Additionally, Elon Musk predicted an 18-month recession and teased a possible share buyback at the company’s shareholder meeting…shortly after joking that “…making macroeconomic prognostications is a recipe for disaster.” 🤷‍♂️

Tesla aims to produce 20 million vehicles annually by 2030 in about a dozen factories.

Bed Bath & Beyond (32.68%) surged after it announced it’s discontinuing its Wild Sage, a private label brand launched a year ago. The move represents an overall shift in strategy that investors hope will aid the company’s turnaround. 📈

Carvana’s (+40.25%) after-hours pop continued today as investors focused on an improving gross profit per unit and number of vehicles sold. 🚗

AMC (+18.97%) roared back after announcing a new strategy that involves “APE” shares and further financial engineering. 🦍

Lastly, investors look beyond poor earnings from $BYND (+22.36%) as the stock rallies amid the meme-stock short squeeze. 🔺

In crypto news, the line between legal ownership and theft continues to blur as GameStop’s NFT market receives backlash for unlicensed game sales. Also, Voyager will return $270 million in customer funds after saying it received “higher and better” buyout offers than what AlamedaFTX presented. Finally, hacked crypto startup Nomad has offered hackers a 10% ‘bounty’ if they return the $190 million they stole. ₿

While some preliminary economic data hinted at a softening labor market, today’s report pretty much negated all of that. ❌

Although strong jobs data is positive news for the economy in that the current “recession but not a recession” environment may not be as bad as some are making it out to be, it just made the Federal Reserve’s job a hell of a lot harder.

The Fed has been trying to bring down demand since inflation is well above its 2% target. However, it is once again staring down the barrel of a major supply issue. The labor force participation rate remains below pre-pandemic levels, and the number of job openings outnumbers available workers by nearly 2 to 1. 😮

The tight labor supply is driving up wages, which rose 0.5% MoM and 5.2% YoY. Since wages are a sticky input cost, they’ll continue increasing pressure on overall inflation. 🔥

And since the Fed cannot control the supply of labor, oil, or other major inflation drivers affected by structural economic issues, its only choice is to continue its war on demand.

Essentially, the Fed will try to break the economy just enough to bring down prices towards its 2% target. That should mean lower growth and a weaker labor market, but we’re not seeing those effects just yet. 🔨

As a result, the Fed will likely stay aggressive at its next few meetings. That vibes with much of what we heard from various Fed Governors this week and what the bond market is now pricing in.

It also means that the stock market will have to rethink its recent rally. Part of the rebound in tech stocks was driven by hopes that the Fed would have to become more accommodative beginning early next year. But…the job market clearly messed with those plans.

We’ll have to see how the market adjusts to this change in expectations over the next few trading days and weeks. 👀

Below we see that concept at work around the $415 level in the $SPY ETF. 👇 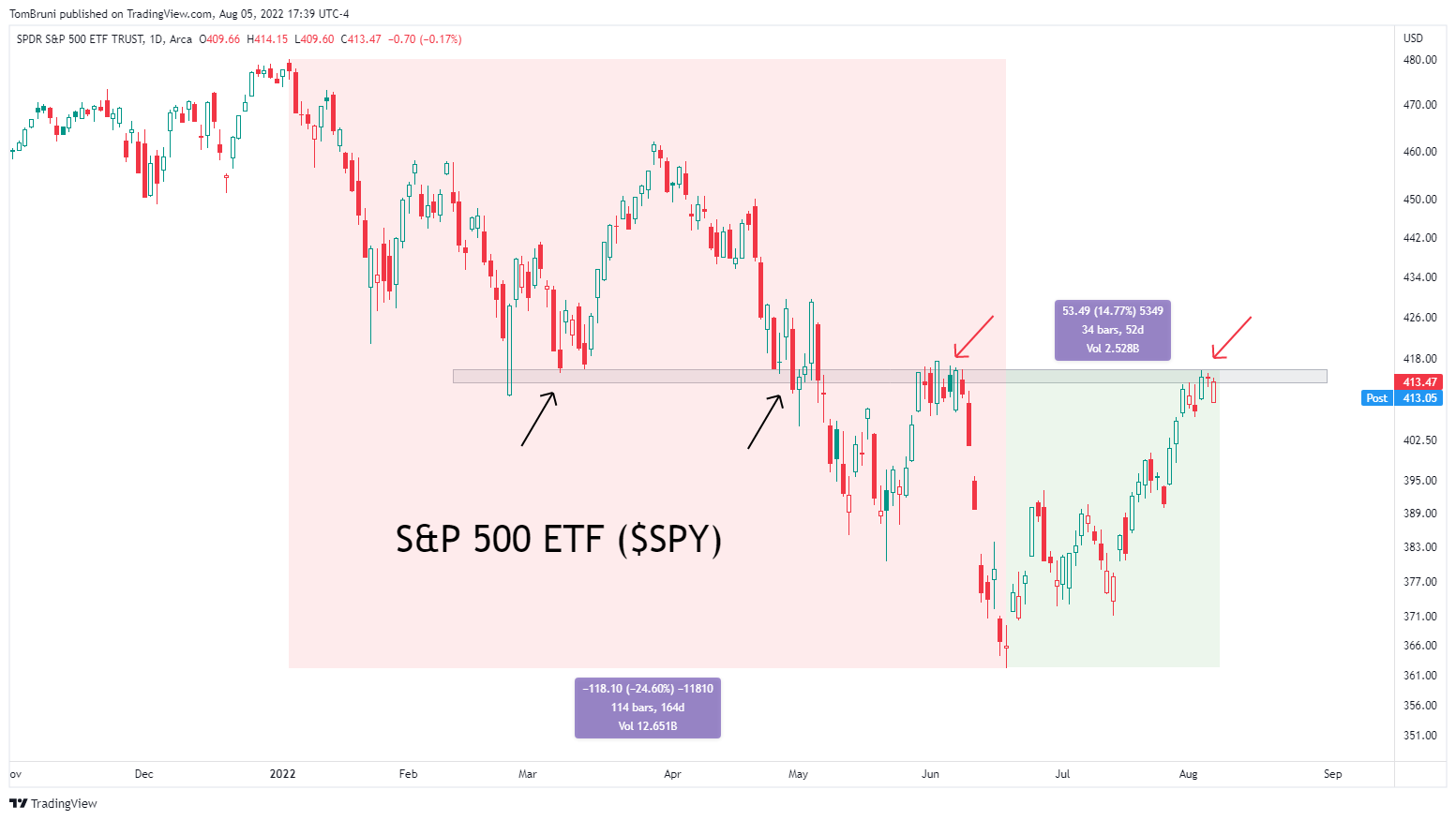 Technical analysts are paying attention to this area for two main reasons. ✌️

First, the market is pausing at the same level it did back in June before prices continued their downward trend. Although the environment feels different than it did two months ago, this area clearly has price memory as prices stopped making progress about a week ago.

The second is the ascent of the rally, which has been steep. The market has gone up roughly 15% in about two months, leading some analysts to believe that a consolidation (period of sideways trading) would be healthy and set the market up for a more sustainable move higher.

Bearish analysts view this retest of resistance as an opportunity to get rid of long positions or initiate short positions, expecting a decline as we saw in June. 🔻

Who will be correct remains to be seen, but what happens from current levels will likely set the tone for the overall market over the coming weeks. 🗓️

💰 Pfizer eyes a $5 billion acquisition. Pfizer is in advanced talks to buy drugmaker Global Blood Therapeutics as competition in the biotech spaces heats up. The company’s treatment for sickle cell disease received U.S. approval in 2019, and its pipeline of drugs makes it a prime target for a cash-flush Pfizer. Reuters has more.

🤖 Amazon creeps farther into your home with its $1.7 billion Roomba purchase. Whether you want it to have your data or not, Amazon is coming for it. The company is adding to its smart-home arsenal by acquiring the maker of Roomba vacuums, iRobot. While some analysts see this as a random move for Amazon, others see it as a way for it to collect more information about a person’s home and overall habits. If capitalism has taught us nothing else, it’s that nothing major corporations do is by accident. There’s always a larger agenda at play. CNBC has more.

🪑 India pushes for a seat at the global M&A table. The country has emerged as a significant overseas market for several global tech giants, and it’s now looking o leverage its vast reach to influence M&A activity overseas. New Delhi has proposed amendments to its Competition Act, 2022, requiring the permission of the Competition Commission of India for all overseas deals over $252 million in value for firms with “substantial business operations in India.” More from TechCrunch.

🦸 Another ‘Super’ idea from Meta. The company is testing a new live streaming platform for influencers called ‘Super’ as it attempts to figure out how to bring its Metaverse vision to reality while keeping pace with other social media giants like TikTok. The company is testing it as a standalone experiment with a small group of creators who can host live streams, earn revenue, and engage with viewers. TechCrunch has more.

🌌 Astronomers say they’ve found the most distant galaxy ever observed

🚀 As losses mount, Astra announces a radical pivot to a larger launch vehicle

🧠 The human mind is not meant to be awake after midnight, scientists warn

A Beyond Packed Earnings Day

Stocks were mixed in a news-heavy day — here’s what you missed.

The fight against inflation continues as the Bank of England hikes rates by another 50 bps. We discuss that and other economic updates below. 👇

A New Bull Market In Tech?

After a two-day reprieve, stocks are back to crushing the bears — here’s what you missed.

Technology stocks continue their recovery, with the Nasdaq 100 officially 20% above its June low. Does this mark the start of a new bull market? We discuss more below. 🐂

It was a turbulent Tuesday in the markets — here’s what you missed.

The U.S. labor market is showing some cracks as job openings fall at their fastest pace since the start of the pandemic. Meanwhile, geopolitical tensions are high as Nancy Pelosi visits Taiwan. More on both below. 👇

Is Cardano A Sleeping Giant?

“The only thing bearish about cryptocurrency is the current price action.” – that phrase perfectly describes Cardano’s current fundamentals related to its current price.

From a fundamental perspective, there are practically zero bearish conditions for Cardano. Cardano has never been hacked, interrupted, or shut down – unlike Ethereum ($ETH.X) or Solana ($SOL.X).

It was a long day for some of retail’s favorite stocks; let’s quickly recap.

AMC shares fell 11% after reporting another net loss and revenue below analyst expectations. However, the company is making another financial engineering bet, opting to list preferred equity shares on the NYSE under the symbol “APE.”