🧊 Stocks cooled off this week, with most indexes closing marginally higher.

📈 Many technical analysts are watching this chart for clues into the market’s next move. Also, the Nasdaq 100 is up 20% from its June lows, leading many to question whether this move qualifies as a new bull market.

🤩 This week’s Stocktwits Top 25 report confirmed what we saw at the sector level, with several biotech stocks topping the charts and many energy stocks losing ground.

💪 Friday’s non-farm payrolls number destroyed expectations, showing the labor market’s strength and making the Fed’s job of fighting inflation much harder. So we may be in a ‘good news is bad news’ type environment again, as what’s good for the economy may not be great for stocks.

😮 Retail favorites from Beyond Meat to AMC reported earnings this week, and despite not great news from the companies themselves, many of the stocks enjoyed massive short squeezes.

🤪 Regardless of the environment, there’s always something crazy going on in the markets. This week it was little-known Chinese company AMTD Digital Inc., which was listed in the U.S. in mid-July,*momentarily* racing to a valuation well over $400 billion. That made it more valuable than 480 companies in the S&P 500.

₿ Crypto’s big story this week was Coinbase partnering with Blackrock to begin offering its institutional customers exposure to Bitcoin. Additionally, Tiffany’s partnered with Cryptopunks to sell a $50,000 pendant…which sold out almost immediately. And lastly, a weird dispute is occurring between Binance and WazirX as the two argue over who owns what.

🔥 Several names were on the Stocktwits trending tab for a good portion of the week, including $GOVX, $SIGA, $AMTD, $APDN, $QNRX, and $REV.

⚡ U.S. automakers say the new Senate bill misses the mark on EVs. The companies claim that roughly 70% of electric-vehicle models would be ineligible for a $7,500 tax credit under the Democratic proposal in the Senate. The bill includes heightened requirements for the percentage of battery components originating from North America and would disallow batteries with any Chinese components after 2023. Industry vets argue a more gradual phase-in of the battery requirement and ability to source components and minerals from NATO members and other allied countries is needed. Reuters has more.

🤝 Israel and Palestine agree to a truce. After a week of rocket attacks, Israel and Palestinian militants agreed to a truce in Gaza. The ceasefire, which will begin on Sunday evening, was mediated by Cairo as tensions in the region continue to heat up, stoking fears that a larger conflict could start at any moment. More from Reuters.

🎵 Michigan congresswoman takes on the music streaming industry. Although it has never been easier to be discovered as a musician, getting paid fairly for your work remains a crucial issue in the music industry. Congresswoman Rashida Tlaib is working closely with the Union of Musicians and Allied Workers to bring balance back to the streaming industry. Her resolution would employ the nonprofit royalties group SoundExchange and Copyright Royalty Board to calculate and distribute royalties. TechCrunch has more. 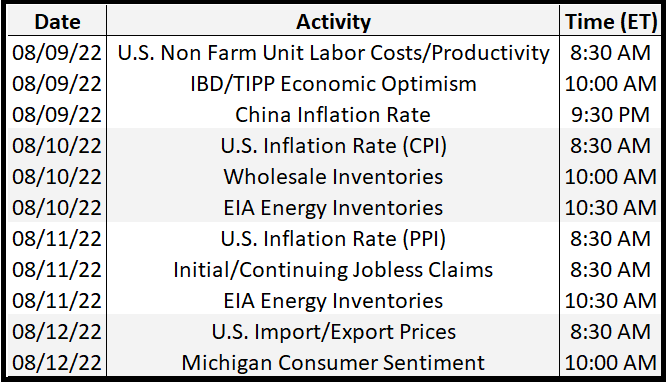 After last week’s robust jobs number, eyes will be on July’s inflation numbers here in the U.S. and around the globe. In addition to the above, check out this week’s complete list of economic releases.

Earnings season is in full swing, with 921 companies reporting this week. Several tickers you may recognize are $PLTR, $COIN, $WKHS, $RBLX, $DIS, $RIVN, and $MTTR.

💸 Pennsylvania makes changes to how restaurant workers are tipped

🎮 Lawyer to pay Activision for not playing Call Of Duty, judge decrees

It’s a new quarter, which means a fresh start. Although, not really, because that’s not how markets work. But let’s roll with it anyway. 📅

As always, let’s recap what happened last week and prepare you for the week ahead.

We spoke about it last week, but the situation in the U.K. continues to escalate.

After only nine months of quantitative tightening, the Bank of England is again stepping in to support the market. The central bank said it would suspend its plan to sell gilts (U.K. government bonds) next week and temporarily buy long-dated gilts to calm the markets.