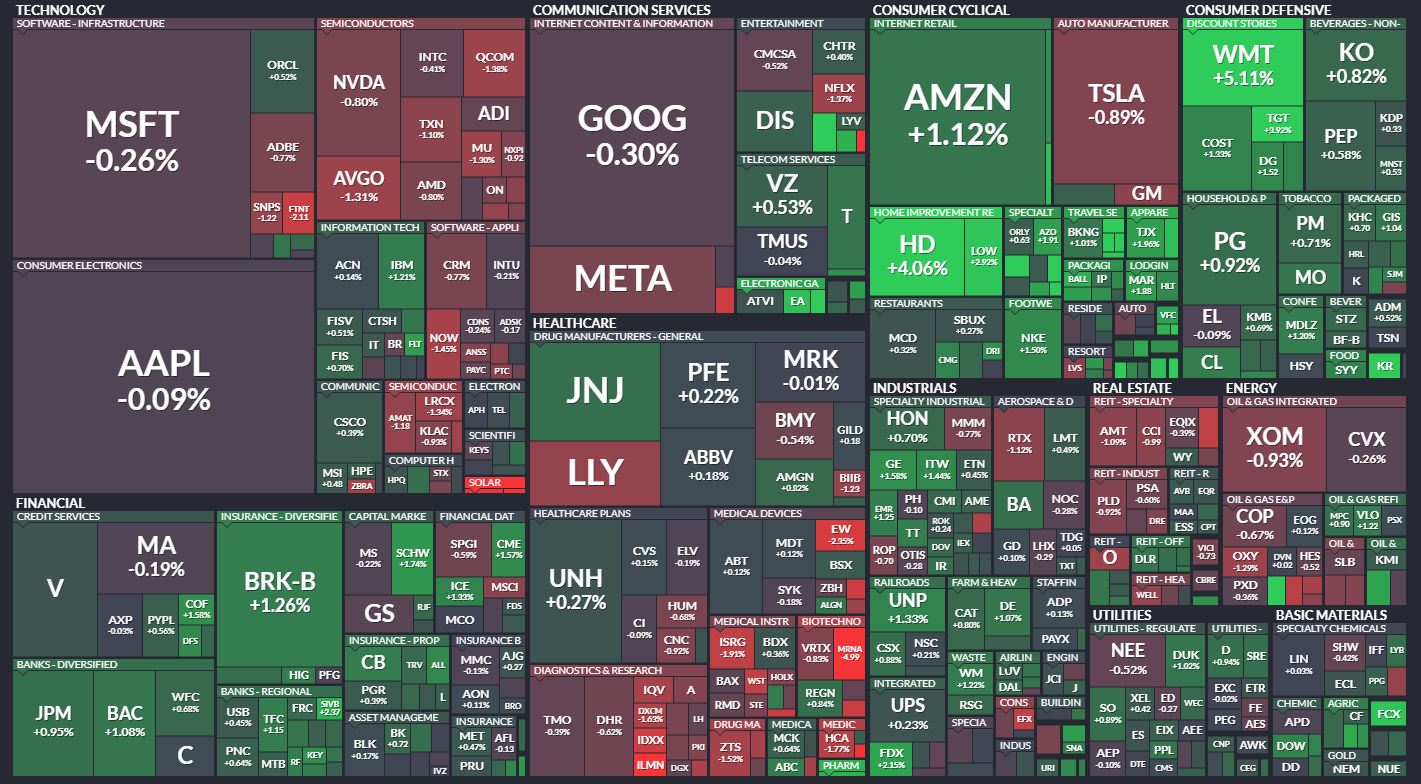 In U.S. economic news, U.S. housing starts fell 10% to their lowest level since August 2020. The decline in building permits was shallower than expected, falling by 1.3% in July. President Joe Biden signed the Inflation Reduction Act into law, officially setting a 15% minimum corporate tax, among other things. 🏘️

Apple was in the news today for a few reasons. First, beginning in September, the company’s employees will return to the office three days a week under a new hybrid model. Additionally, it’s reportedly laying off 100 contract recruiters as it continues to slow hiring. Finally, an Apple employee is facing termination after sharing various information about the iPhone to TikTok, a situation that highlights the need for companies to update their social media policies regularly. 🍎

Disney is once again the target of activist investor Dan Loeb, who urged the company to make a series of changes to cut costs and generate free cash flow. 🎯

In other activist news, Elliott Management has sold almost all of its shares in SoftBank Group Corp. after failing to convince the company to buy back stock and increase board independence. 📉

In crypto news, the Fed has created a three-tiered system for evaluating whether a crypto financial institution should have access to the central banking system. Lastly, the horror stories from Voyager’s customers continue to roll in. ₿

Then, last month, the company cut its quarterly and full-year profit guidance, sending the retail sector into another tailspin. In that release, it stated that it aggressively marked down items to clear inventory and that rising food and fuel prices hurt consumer spending. 📉

Today, however, it appears the company lowered the bar enough to simply step over it as its earnings and revenues exceeded analyst expectations. 👍

The company continues to sell through excess merchandise and has “canceled billions of dollars in orders to help align inventory levels with expected demand.” While that’s great for the company, it may not be great for the economy that inflation-strapped consumers continue to shift spending towards necessities and away from discretionary merchandise like electronics and apparel. 🤷‍♂️

Lastly, the company continues to beef up its Walmart+ membership to compete with Amazon Prime. Yesterday it announced a deal with Paramount+ to add the streaming service to its membership. 📺

Despite the company clearing a low bar, investors cheered the results sending the stock up 5.11%. 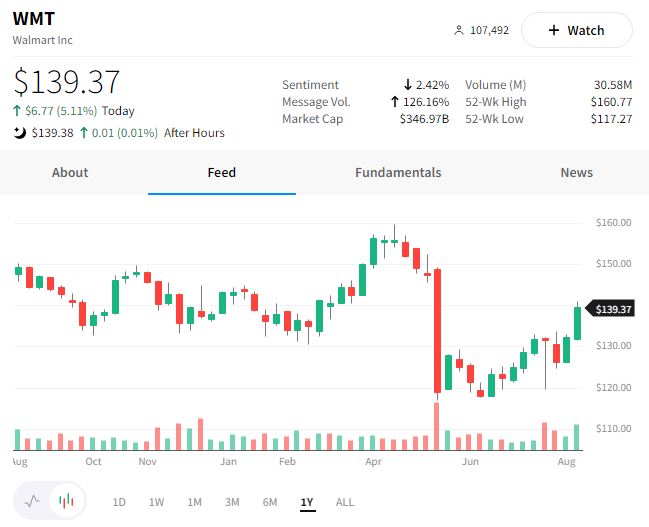 Same-store sales of 5.8% also topped expectations of $4.9%, driven by a higher average ticket and lower transaction volumes. Both pro and DIY sales growth was positive, showing that people are still prioritizing home improvements despite a weaker macroeconomic environment. 🧰

We’ll have to see if the economic backdrop affects consumer behavior through the rest of the year, but so far, the company says project backlogs are still healthy, and customers aren’t yet trading down to less expensive items.

Investors seemed pleased with the results, as the stock rallied 4.06% today. 👍 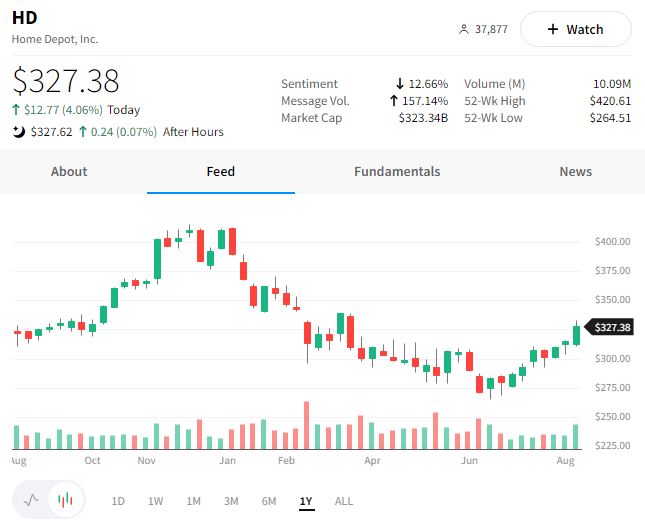 We’ll get more information about the state of retail and the economy when Target and Lowe’s report tomorrow before the bell. 🔔

Bed Bath & Beyond Amazing To Watch?

The meme stock rally continues, leaving many to question, what the heck is going on? 🤔

While we can’t know exactly what’s going on, we’re going to outline a few theories that might explain the recent action in Bed Bath and Beyond and other retail favorites.

First, we have to remind ourselves that there are two broader angles to the ‘meme stock’ craze.

The first is that, from a stock market perspective, you’ve got retail investors on message boards/online communities targeting stocks with the potential for outsized moves. That could be due to short interest, low float volume, a celebrity or famous investor getting involved with the stock, etc.

Many traders want to make money and make it fast, so they tend to trade the most volatile things they can find. There’s nothing new about that.

The second aspect is that, from an underlying business perspective, the stocks’ activity has given many of these companies a lifeline. They can sell more stock or debt at prices they wouldn’t have been able to before, thus buying them more time to try to turn around their actual business.

That’s partially why most of these stocks hadn’t crashed back to the same prices they were before they became ‘meme stocks’ and rallied a ton.

The media likes to characterize anyone trading these stocks as gamblers, but once you understand the backdrop above, these moves become a bit more understandable. 📰

Now, let’s examine why these stocks have been so active recently. As we said, it’s hard to pinpoint a single reason, but several of these are likely at play here based on what we’re reading.

When it comes to Bed Bath and Beyond, the catalyst many are using to explain today’s move is Ryan Cohen’s bullish bet on the company. An SEC filing showed that in April, his VC firm took a bullish position in out-of-the-money calls with strikes between $60-$80 expiring January 2023. 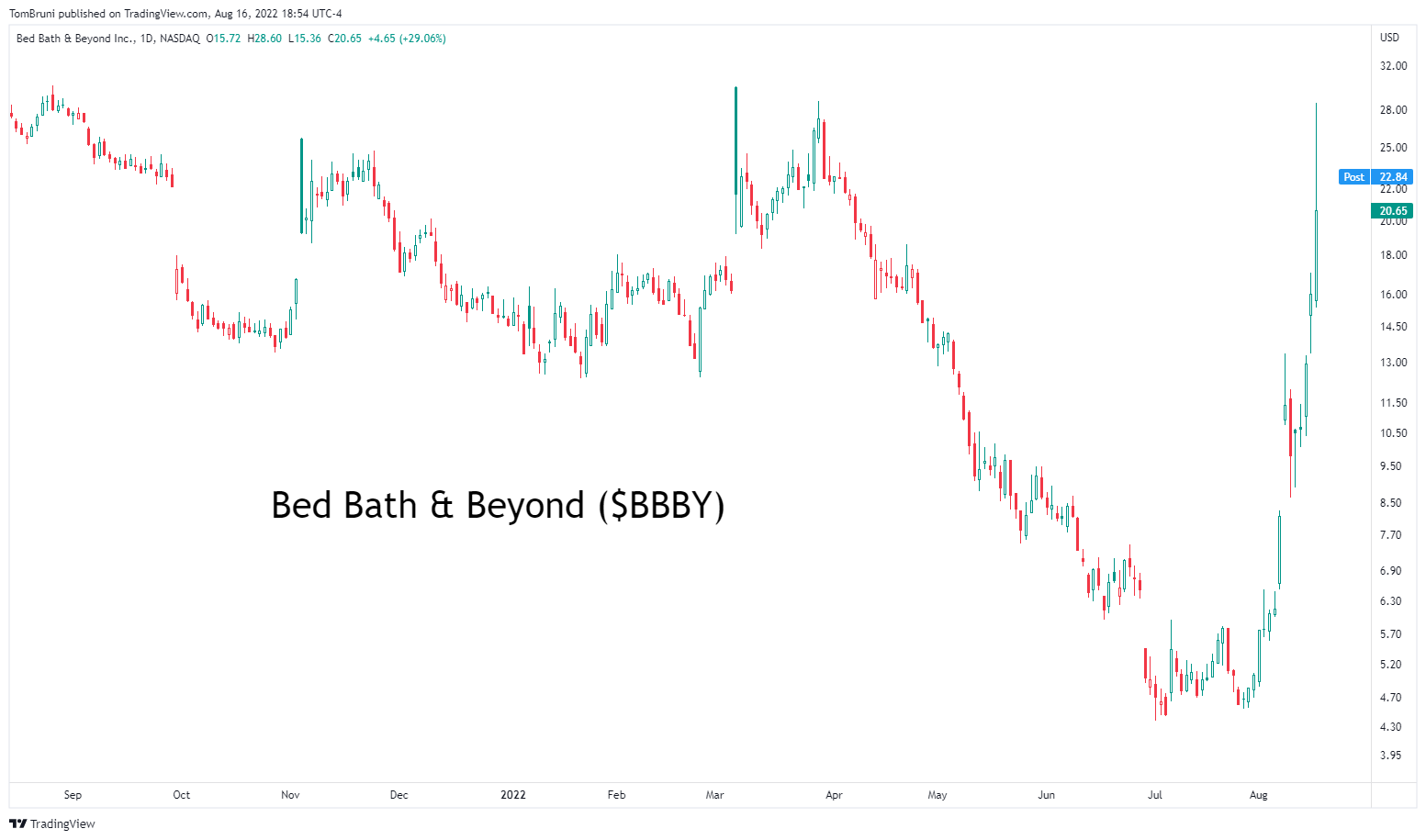 In terms of the broader ‘meme stock’ trend, this is the same group behavior we’ve seen for decades, this time, it just happens faster because we can all share our thoughts and trade for free in real-time.

If the study of behavioral finance has taught us anything, it’s that human behavior hasn’t changed all that much through history. What changes are the mechanisms through which it’s expressed. 🤷‍♂️

Besides, if Gamestop or Bed Bath and Beyond were truly a one-off situation, then we wouldn’t have seen a slew of old and new retail favorites taking off over the last few months. Everything from Redbox, Revlon, AMTD Digital (HKD), and Magic Empire Global Ltd. (MEGL) to the more well-known AMC, Blackberry, etc. have been topping the trending charts recently. 😮

While many may think the game of momentum “whack-a-mole” may be silly to play in the stock market, history suggests that it’s not going away anytime soon.

So sit back, grab some popcorn, and watch the market’s amazing moves. 🍿

And if you’re going to play, make sure you only risk what you can afford to lose. History has also shown us that for every big winner in these stocks, there are a lot of losers too.

🥔 Tiger Global bets on potatoes. After a rough year of losses, Tiger Global’s new 13F filing showed that the firm had added a position in a $12 billion company called Lamb Weston. It’s one of the world’s biggest producers of frozen potato products that ConAgra spun off in 2016. After getting battered by investing in innovation stocks, a position in this simple business may be a small hedge against the rest of the company’s lofty bets. Financial Times has more.

⚡ Ola Electric targets a made-in-India EV by 2024. The SoftBank-backed company plans to launch an all-electric vehicle that can go from 0 to 100km/hr in four seconds, have a range of 500km per charge, and assisted driving capability, among other features. The company’s leader says that global automakers do not believe India is ready for world-class tech and that they only sell their hand-me-downs in the country; however, he wishes to change that. These are lofty goals, but in the EV space, talk is cheap until the rubber finally meets the road. More from CNBC.

🥡 Tencent plans to divest its stake in food delivery co. Meituan. The Chinese food delivery giant Meituan’s shares fell 9% after a Reuters report that Tencent is planning to sell the majority of its $24 billion stake in the company. The company’s move comes as Tencent looks to make regulators happy and also take some gains on its eight-year-old investment. However, a source told CNBC that Tencent has no current plans to sell its stake, so we’ll just have to see what happens. CNBC has more.

💰 Property management tool co. Guesty scores $170m in funding. The Tel Aviv-based company created a platform that allows users to manage property listings across multiple sites like Airbnb, Vrbo, Expedia, and Booking.com. The all-equity Series E round is at a valuation roughly three times its last funding round. The new funds will help fuel growth and develop tools that adapt to changing consumer behavior. More from TechCrunch.

🛒 Amazon raises seller fees for the holiday season. A few weeks ago, we saw the United State Postal Service push through some price hikes for the upcoming holidays, and now Amazon is doing the same as companies deal with rising costs ahead of the peak shopping season. From October 15th through January 14th, third-party sellers who use Fulfillment by Amazon will have to pay $0.35 per item sold in the U.S. or Canada. This year is the company’s first time implementing a holiday surcharge, but it says it’s a necessary measure because “expenses are reaching new heights.” CNBC has more.

📈 See why so many investors choose MarketSmith over free chart services—try 3 weeks for just $19.95*