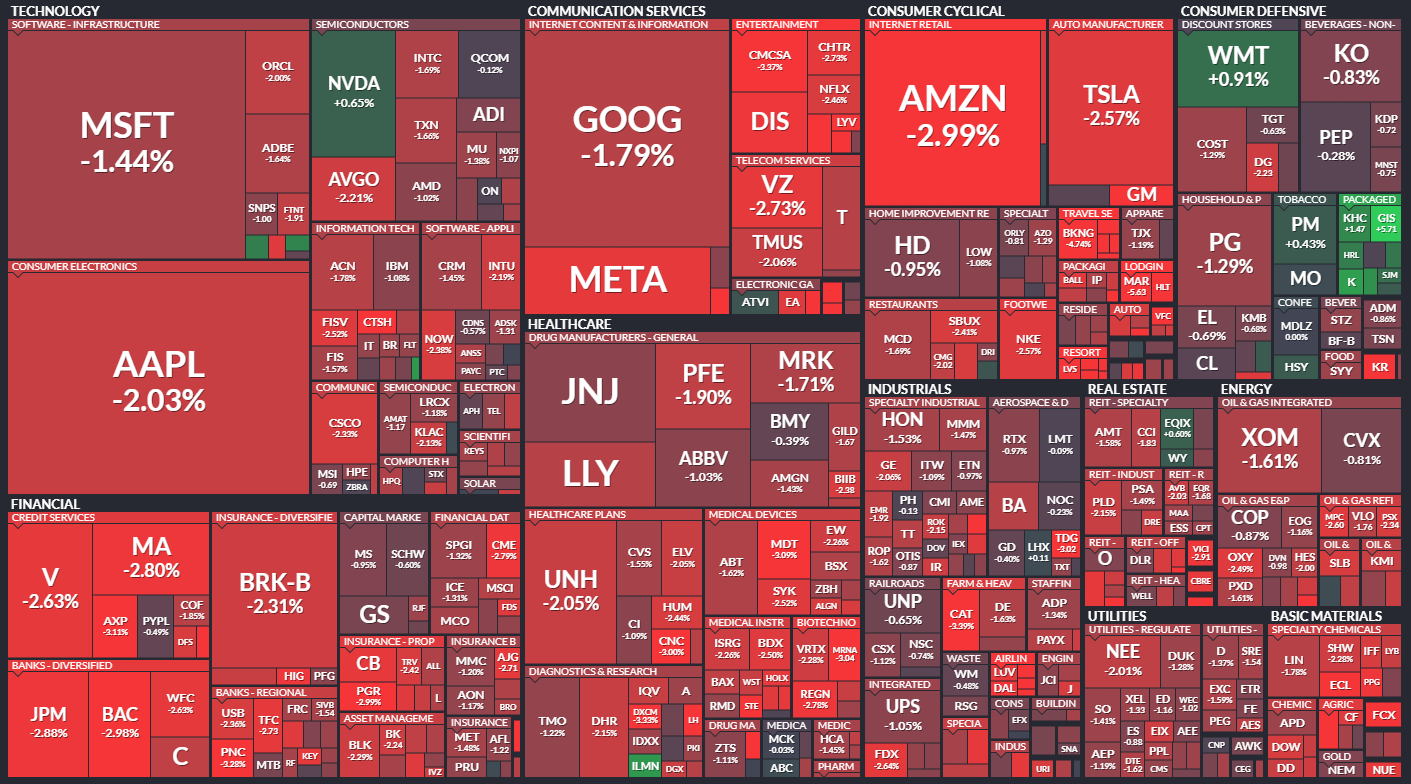 Every sector was red, with communication services (-2.48%) and consumer discretionary (-2.39%) leading lower. 🔻

In international news, Vladimir Putin is mobilizing 300,000 troops for the war in Ukraine and warns the West that his nuclear threats are not bluffs. Meanwhile, European countries continue to nationalize and subsidize their energy providers ahead of what’s going to be a very tough winter. And China urges dialogue and consultation after Putin’s warning. ⚠️

The escalating conflict shares of defense stocks Lockheed, Northrop, Raytheon, and others higher. 💣

CoverGirl’s parent Coty popped 3.21% after outlining a comprehensive strategy to double its skincare sales by FY25. 💄

In crypto news, a New York judge has ordered Tether to produce financial records relating to the backing of USDT. U.S. stablecoin oversight legislation is almost ready for release but won’t include a controversial central bank digital currency (CBDC) request. And the SEC claims all of Ethereum falls under U.S. jurisdiction. ₿

So, what’s changed? Not a whole lot, but let’s read between the lines as we always do.

If their projections are correct and inflation remains high, another 75 and a 50 bp hike are coming in the next three months. 🔺

The second significant change, which isn’t really a change, is that the Fed is throwing out the potential for a “soft landing.” While most of us discarded that idea after seeing the labor market strength and stickiness of inflation, it appears the market still had some hope left in it.

Jerome Powell is waging a full-on war against inflation, and his two targets are the labor market and housing. He cannot, and will not, stop until prices meaningfully progress back towards 2%. That means unemployment will rise and housing prices will fall (or so the Fed hopes) in the coming quarters. Historically, that’s not great for risk assets like stocks or crypto either.

In the meantime, here’s a look at the CME FedWatch Tool, which shows the market’s projections for future hikes/cuts. After today’s meeting, it looks like the market is readjusting its expectations for more hikes through early 2023 and just one cut. To put that in perspective, over the summer, the market had been projecting rate cuts as early as Q1 2023.

What’s going to happen is anyone’s guess. That’s what we’re all doing here. But it appears the market is finally waking up to the idea that things could get worse before they get better. 😬 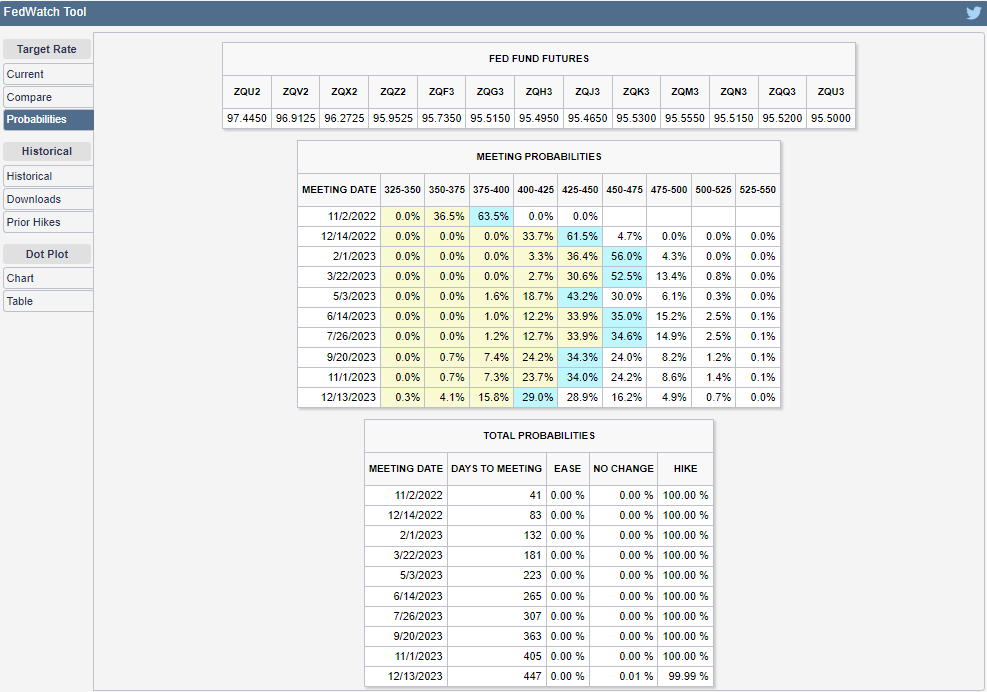 The housing market is already in rough shape, and the Fed reiterated its determination to bring prices down further. Given this is such an essential part of the economy, let’s look at earnings from homebuilders KB Home and Lennar. 👀

First, let’s start with KB Home. Its earnings per share beat estimates of $2.67, coming in at $2.86. Meanwhile, its revenues of $1.84 billion were slightly below expectations.

Home deliveries were up 6% YoY, but its third-quarter net orders fell by 50% due to higher mortgage rates, inflation, and macro pressures. In addition to demand waning, the company expects extended build times and supply constraints to continue into the fourth quarter. ❌ 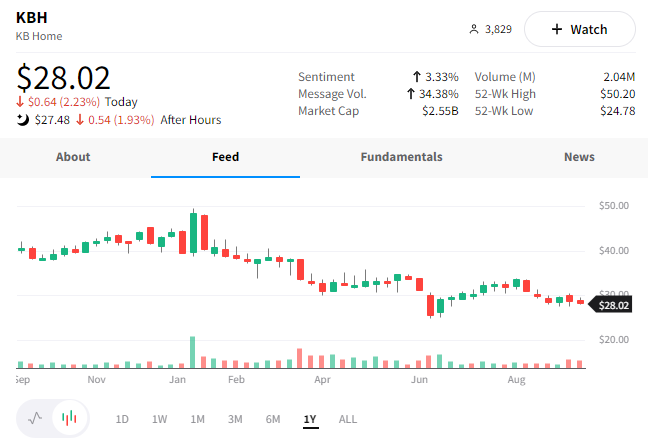 Like KB Home, a drop in new home orders shows slipping demand as a weaker macro environment, and higher rates push buyers out of the market. On the supply side, it noted an increase in materials and labor costs and that overall supply chain constraints (although improving) continue to limit its deliveries. 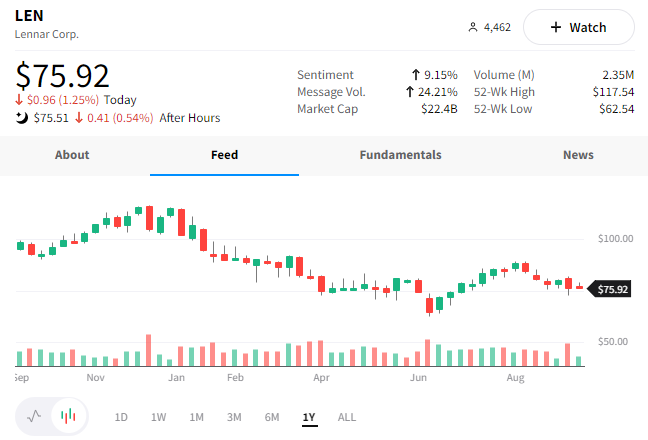 While these companies aren’t entirely sounding the alarms yet, the housing market is clearly amid a slowdown. And with the Federal Reserve focused on bringing down inflation by any means, monetary policy will likely remain a headwind for these companies well into next year.

After-hours volume is typically light for these companies, so we’ll have to see what tomorrow brings. Though the initial reaction from both stocks looks like their reports…not great. 👎

Exciting Move In A Boring Stock

When people hear the word “general,” they may think of the military, car insurance, or automobiles. However, today we’re talking about a general in the food space whose stock price has quietly moved to all-time highs.

That stock is General Mills, which marched higher today after reporting better-than-expected earnings and raising its forecast. 💪

The $47 billion consumer foods company known for Cheerios, Betty Crocker, and Häagen-Dazs reported adjusted earnings of $1.11 and revenues of $4.72 billion. Earnings beat expectations by $0.11 per share, while revenue matched estimates.

Given the U.S. dollar’s strength, multinational companies have struggled internationally, and General Mills was not exempt. Its international sales dropped 30% YoY. 😮

Offsetting that weakness was strength in its North American Retail, North American Foodservice, and Pet sales, which saw YoY growth of 10%, 21%, and 19%, respectively. The company expects that strength to continue, raising its fiscal 2023 guidance for EPS growth of 2%-5% (from 0%-3%). Additionally, it expects organic net sales to rise 6%-7% vs. previous guidance of 4%-5% YoY.

Whether defensive areas of the market will continue to be a safe haven during these volatile times remains to be seen. But so far, that seems to be the case for companies with good results.

Investors cheered the strength and sent $GIS shares up 5.71% to new all-time highs while the market flopped. 📈 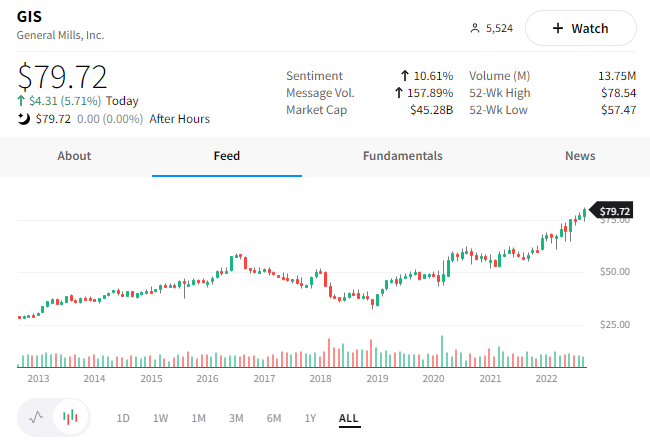 🚗 Will all new U.S. cars include alcohol detection systems? The U.S. National Transportation Safety Board (NTSB) recommended that all new vehicles be equipped with systems to stop people from driving while drunk. Unfortunately, the agency can’t issue the regulation on its own but urged the National Highway Traffic Safety Administration (NHTSA) to do so. Section 24220 of the Bipartisan Infrastructure Law includes a rule that would be issued by November 2024 and give car manufacturers two to three years to comply. ArsTechnica has more.

💰 SMB-focused Pie Insurance raises $315m Series D. In one of the largest rounds of 2022, the insurtech company, which provides workers’ compensation insurance to small businesses, has more than doubled its total funding since inception to $615 million. Pie has more than doubled its number of policyholders and insurance agency partners since the Jan 2021. It will use its new funding to expand into new lines of business and transition into a full-stack carrier. More from TechCrunch.

😨 JPMorgan CEO Jamie Dimon tells Congress to “prepare for the worst.” The leader of the nation’s largest consumer bank said there’s only a “small chance” of the Fed pulling off a “soft landing.” He urged lawmakers to be prepared for the worst-case scenario so that they can take the right actions if and when it happens. USA Today has more.

👍 EU approves up to $5.2 billion in public funding for hydrogen projects

🤝 Home Depot workers in Northeast Philly petition to unionize, in what could be a national first