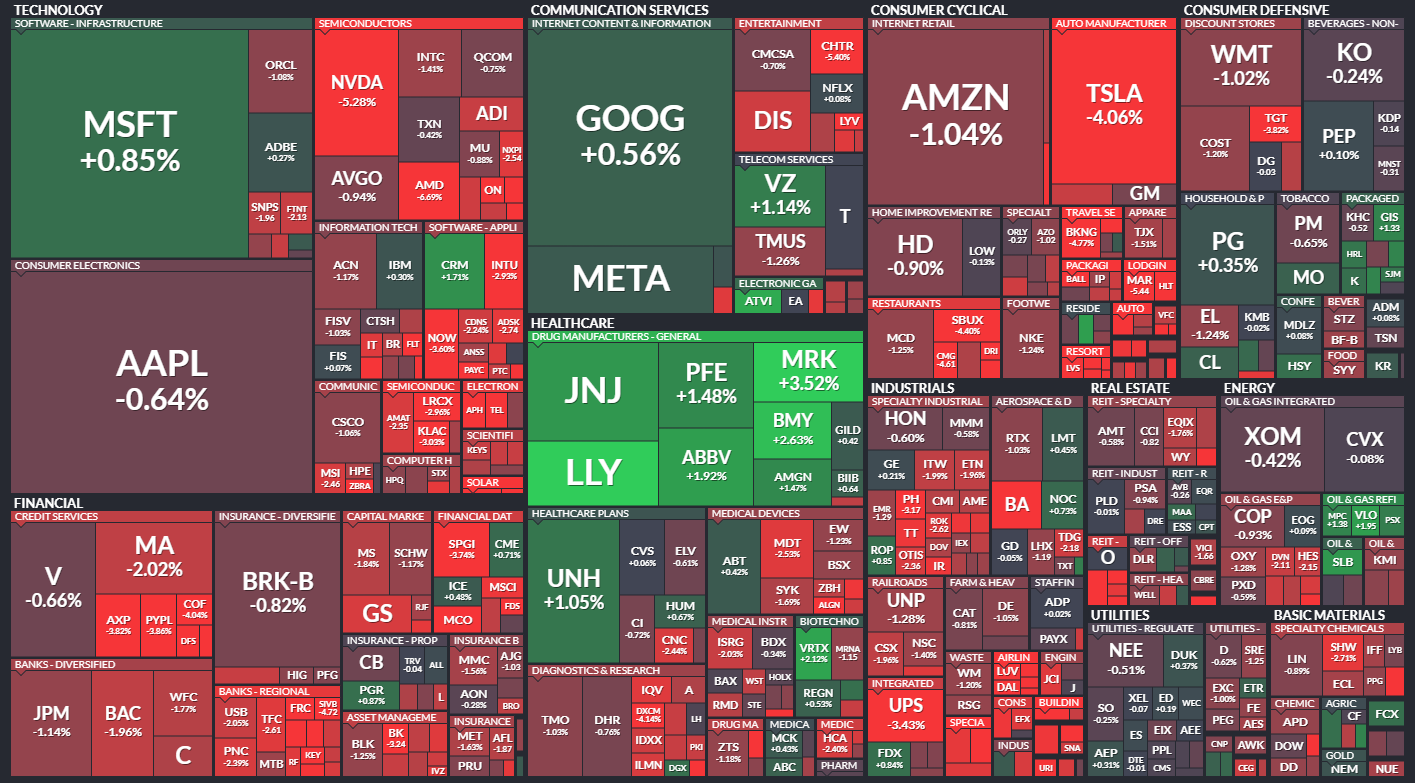 In international news, the Bank of England hiked rates by 50 bps and says the U.K. may already be in recession. Meanwhile, Japan intervened to prop up the yen for the first time in 24 years by buying yen and selling U.S. Dollars. Lastly, Turkey cuts interest rates again despite the country struggling with 80% inflation. 🗺️

In U.S. economic news, the Conference Board Leading Economic Index declined for a sixth consecutive month. And Kansas City Fed data showed that manufacturing activity in the central U.S. expanded marginally in September. 🏭

Ford is looking for a new Chief Supply Chain Officer to lead its global supply chain restructuring. The shakeup comes days after Ford revealed $1 billion in unexpected costs in its third quarter. 📝

Boeing pays $200m to settle SEC charges that it misled investors after the deadly 737 Max crashes. 🤝

Cassava Sciences rallied 35.65% after the SEC cleared it of tampering with Alzheimer’s data. 📈

“Star investor” Cathie Wood is giving up her portfolio manager role at two of the firm’s ETFs. 😮

Based on the title, you’d think we’re talking about the money supply or some other economic term.

Results were mixed, with its earnings per share of $1.56 meeting estimates. However, its revenues of $2.45 billion missed expectations by $0.02 billion.

CEO Rick Cardenas said that inflation is weighing on consumers, especially those households with incomes under $50,000. But, so far, there’s a slight change in behavior from that consumer. That said, Darden is trying to draw customers by limiting how much of its rising costs it passes on to its customers.

While sales slump, inflation continues to eat into the company’s operating profit. Its menu prices rose 6.50% in the quarter while trailing total inflation rose 9.50%. 🔺

Overall, Darden stood by its outlook for fiscal 2023 as it predicts inflation will cool in the coming quarters. As a result, it expects EPS from continuing operations of $7.40-$8.00. It also expects revenue of $10.20-$10.40 billion. Lastly, it forecasts same-store sales growth of 4%-6% and 55-60 new restaurant openings.

The restaurant operator spoke about many of the same themes we’ve been hearing about the consumer and overall macro environment. Unfortunately, while the company seems optimistic about inflation coming down and its operating results, investors appear less so. 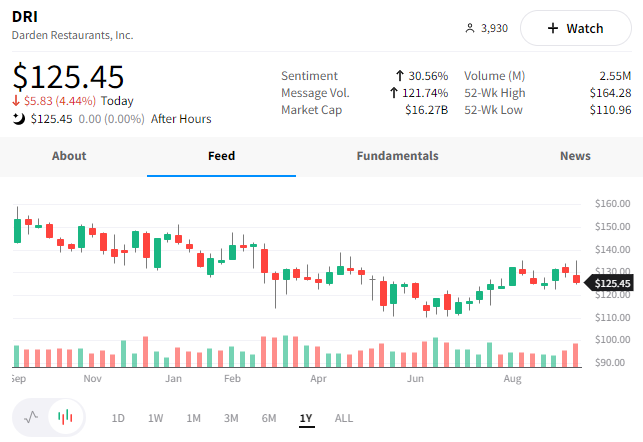 According to one insider, industry pushback has resulted in the SEC shifting its focus towards other ways of making the market more transparent. While the regulator declined to comment on the rumor it’s dropping the ban; it said it’s considering a range of possible changes.

The news sent shares of high-frequency-trading firm Virtu Financial up 8.55% today. Brokers like Robinhood, who rely on PFOF for a significant portion of their revenues, also popped initially before trading back down with the rest of the market. 📈

Today’s unexpected news caused a stir among retail investors who view the PFOF practice as predatory. Gary Gensler and the SEC have made steep promises of increasing market transparency and fairness. And after a few wild years in the markets, many argue the agency has failed to deliver.

The proposed rule changes should be released before year-end, so we’ll just have to wait and see what happens.

For now, though, it appears we’re right back to where we started… 🤷

First, let’s talk about how companies are preparing in the current market environment. Then we’ll talk about what analysts are watching for.

Today, Walmart said it plans to hire 40,000 workers for the holiday season. Some will be part-time store associates and customer service workers. Others will be permanent truck drivers. While 40,000 may seem like a lot, this is down from the 150,000 the company hired last season.

Meanwhile, Target said it plans to hire 100,000 seasonal workers for the holidays and begin its sales promotions earlier than in past years. Markdowns will begin October 6th., which means this year’s holiday season will be the entire fourth quarter. Unlike Walmart, the company is hiring the same amount of seasonal workers this year as it did last.

These two companies have been in the news more times than they’d probably like, and their stocks have been put through the grinder. 😬

So this holiday season, analysts will look at things through two lenses.

The first lens is a “macro” one, where analysts will use these companies’ results to gauge the health of the U.S. economy. Consumer spending is two-thirds of the U.S. economy, so they’ll be watching to see IF and HOW people are spending. With Jerome Powell and the Fed waging a war on demand and the global economy struggling, this year’s likely to be a tough one.

The second lens is a “company-specific” one, where analysts will look to see how well these retailers can operate. Can they manage their costs appropriately? Do they have the right product mix in their inventory? Can they capture or maintain market share in a weak economic environment? And ultimately, how does this all translate into their results?

We’ll have to see how things shake out in the coming quarter.

On the bright side, whether these companies deliver or not, there will be sales. Either they’ll sell their excess inventory on the cheap, or their stocks will be in the clearance bin. 😂

🌊 This tech CEO says a deadly tidal wave of macro risks will wipe out some companies. Palantir CEO Alex Karp believes the current environment will crush many companies with shaky fundamentals. Despite his company’s stock sitting near all-time lows, he noted, “Bad times are incredibly good for Palantir … bad times really uncover the durable companies…” He also believes the economic situation overseas is even direr, noting the energy crisis and broader macro-political landscape. CNBC has more.

🤔 Measure once, cut many, many times? Tech companies continue to talk the talk but fail to walk the walk when managing. While many of these firm’s executives say they want to make deep cuts to their workforce once rather than many cuts over a prolonged period, their execution has failed to deliver on that ideal. Instead, we’re seeing companies like Klarna letting go another 500 employees after cutting 10% of its workforce last May. They’re not the only ones and are unlikely to be the last, given the current environment. More from TechCrunch.

⚖️ Facebook users sue Meta for bypassing Apple security protocol. Apple’s 2021 privacy rule update allowed iOS users to opt out of all tracking by third-party apps easily. Still, two class action lawsuits allege that Meta continued to collect data without its users knowing. A former Google engineer asserts that one way Meta sought to get around Apple’s new policy was by directing any link a user clicks in the app to open in a browser where the company could track user activity without consent. arstechnica has more.

❌ Amazon loses effort to exclude Jassy & Bezos from FTC probe. The Federal Trade Commission rejected the company’s attempt to exclude CEO Andy Jassy and founder Jeff Bezos from testifying in an investigation into the company’s Prime program. Amazon had accused the FTC of harassing its top executives, and while the FTC denied their complete request, Amazon did gain some concessions. The ruling is a tiny part of the ongoing legal dispute over Amazon’s prime membership practices, so expect more updates in the future. More from CNBC.

📱 Instagram is developing a nudity filter for DMs. Unfortunately, no matter what platform you’re on, NSFW content has a way of finding its way onto your screen. That is especially true for social media platforms like Twitter and Instagram. However, Meta is testing a new way to filter out unsolicited nude messages sent over direct message. The new technology would cover up photos that may contain nudity but noted that it would not be able to access the images themselves. The move comes as more social media platforms look to provide users tools to curate the experience they want to have. TechCrunch has more.

🤌 Tesla recalls 1.1 million vehicles over windows that can pinch fingers

Steady As She Goes

It’s all quiet on the market front as investors brace for Wednesday’s Fed decision — here’s what you missed today. 👀

The image below is Bitcoin’s ($BTC) weekly chart. The horizontal red and green bars on the left side of the chart are part of a tool in technical analysis known as the Volume Profile.

The Litepaper got a chance to visit with Input Output Group’s (IOG) Chief Marketing Officer, Jerry Fragiskatos. Who is IOG? Well, they’re the team that develops Cardano ($ADA.X) until Cardano is ready to walk on its own – which isn’t very far away!

With Ethereum’s Merge ($ETH.X) already behind us and Cardano’s Vasil hard fork complete just yesterday, there’s a lot of questions I had.