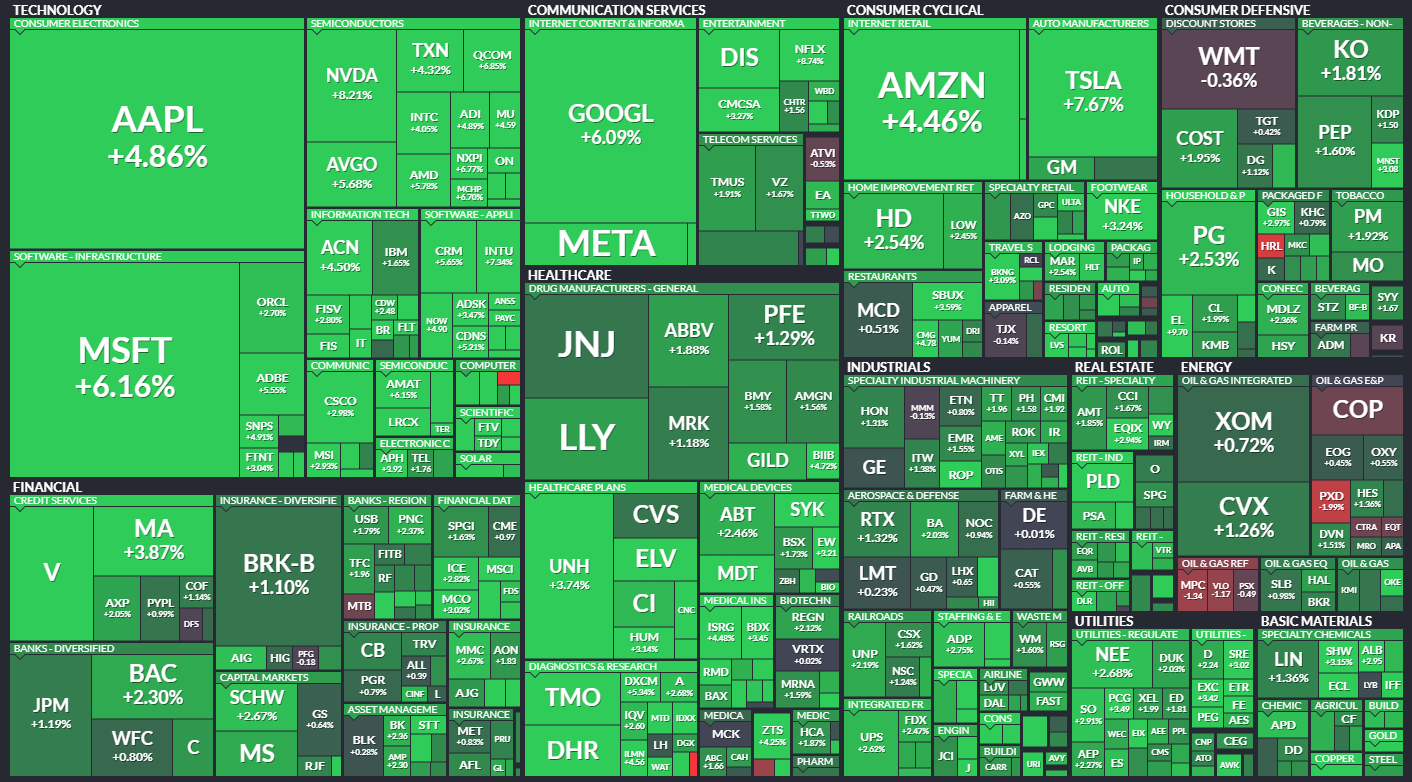 Oil prices rallied on a larger-than-expected inventory draw as the OPEC+ meeting looms next week. In Europe, Germany has signed a 15-year deal with Qatar to receive liquified natural gas (LNG) from the country through QatarEnergy and ConocoPhillips. 🛢️

Horizon Therapeutics rose 27% as it fields buyout interest from Amgen, J&J, and Sanofi. 💰

In crypto news, crypto exchange Kraken is laying off 1,100 employees. The European Central Bank (ECB) says bitcoin is on the ‘road to irrelevance.’ And Sam Bankman-Fried was interviewed by Andrew Ross Sorkin at the DealBook Summit. Our Litepaper writer, Jon Morgan, summarized the talk here and will continue updating it this evening for your reading pleasure. ₿

🃏 P.S. Our 3rd annual Chips for Charity is this coming Saturday. Secure your seat today to compete for the $5,000 prize and support a great cause! ₿

Answer a short survey to be entered into a random drawing to win one of five $100 American Express e-gift cards.

Your response will help improve the newsletter experience. You have until Friday, December 9th, at 11 am ET, to complete the survey. There is only one entry per participant. Good luck, and thank you for your participation!

Federal Reserve Chairman Powell’s speech at the Brookings Institution was highly anticipated. And based on today’s price action…he did not disappoint.

There’s a lot to get through, but let’s look at takeaways from his speech and today’s economic data. 🔍

That messaging was also reiterated by several Fed members’ press comments and speeches.

Now, let’s get into Powell’s speech and Q&A session at the Brookings Institution. 📝

He started by acknowledging the recent progress in the inflation data. However, he said, “Despite some promising developments, we have a long way to go in restoring price stability.” and “It will take substantially more evidence that inflation is declining and by any standard inflation remains far too high.”

Next, he recognized how poor the Fed and private sector’s inflation forecasting has been over the last year, stating, “…the path for inflation remains highly uncertain.”

As a result, rather than provide more inaccurate forecasts, he outlined what macro conditions the Fed needs to see for inflation to come down meaningfully. They included:

To encourage those economic conditions, the Fed expects to do several things through 2023.

What really got markets going was Powell’s comment about the Fed’s December meeting. He suggested that the Fed could “Reduce the pace of rate increases as early as the December meeting…”

He also peppered in some hope for a “soft landing” during his Q&A, where he stated, “…I do believe  there is a path to a soft-ish landing.” When asked to clarify that, he said, “Unemployment goes up, but without a severe recession.” 🛬

With that said, he did say that history warns against reversing policy too soon. And that “…cutting rates is not something we want to do soon.” ⚠️

His final remarks were that the Fed would “Stay the course until the job is done.”

Powell didn’t say much that we haven’t heard before. However, strongly hinting at a slowdown in the pace of hikes this December was enough to spark a rally in risk assets. 📈

There were some other great points, so we encourage you to watch the entire thing. But for now, let’s quickly review today’s economic data.

Next, the Job Openings and Labor Turnover Survey (JOLTs) showed 10.33 million job openings in September. This left 1.7 job openings per available worker, which is down from a 2 to 1 ratio peak.

The labor market remains tight but continues to show signs of softening at the aggregate layoff. Today we saw layoff announcements from CNN, H&M, DoorDash, Kraken, and NPR.

Manufacturing activity fell off a cliff, with October’s Chicago PMI reading falling for the third straight month to 37.2. That jives with the manufacturing job losses shown in the ADP report. 🏭

Lastly, the U.S. economy’s Q3 GDP estimate was revised up to 2.9% after two-quarters of contraction.

We’ll leave it there, but note that tomorrow’s PCE Price Index and Friday’s Non-Farm Payroll data will be watched closely. 👀

China and its markets remain in focus this week. We covered news on Friday, Monday, and Tuesday and will add to that today. So let’s dive in.

The first update is that China’s factory activity hit its lowest level since April, as lockdowns and protests weigh on business activity. As a result of the last few weeks, China’s Zhengzhou, which is home to the world’s largest iPhone factory, ended its Covid lockdown. Others, including the financial hub of Shanghai, are following suit as the country tries to curtail unrest and reboot its economy. 🏭

Revenues rose 19.3% YoY, but at 6.82 billion Chinese yuan, it missed the 7.26 billion expected. Meanwhile, it reported a net loss of 2.38 billion yuan this quarter. While this beat the 2.09 billion yuan expected, it was up 1.59 billion yuan reported in the same quarter last year.  🚗

It pointed to supply chain issues, rising competition, and a more challenging macroeconomic environment as the driver of its results. However, the company hinted at a potential bottom in deliveries soon. It also noted the completion of its internal restructuring and believes it has a strong strategy for the future.

Shares of $XPEV still rallied nearly 50% as investors look ahead to a hopefully stronger future. 🤷 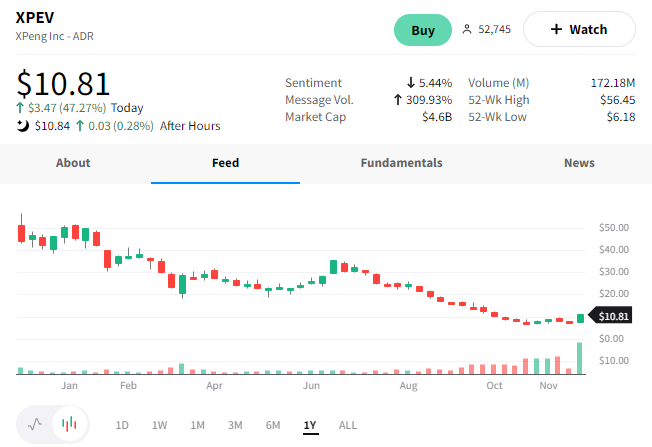 That strength in XPeng and the broader market spilled into other electric vehicle makers like Nio, which rose 22%. ⚡ 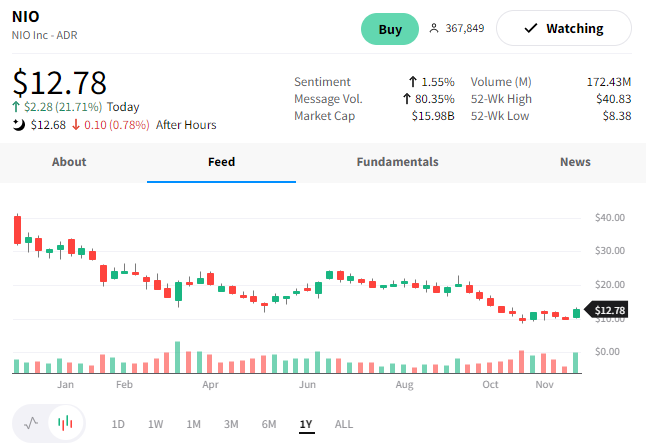 👍 House approves tentative railroad labor deal. With a nationwide railroad strike looming, the House of Representatives looks to force a tentative rail labor agreement between unions and railroad operators. The Biden administration has been reluctant to intervene further but sees little choice as a rail shutdown would devastate the economy during the busy holiday shopping season. The House vote added seven days of paid sick leave to the agreement instead of the one currently in the contract. With this being the main disagreement, hopes are this will help bring the two sides closer. CNBC has more.

⛔ Delta is curbing access after travelers flood their airport lounges. What was once an exclusive club has become an everyday luxury for many travelers, leading to long lines and unsatisfactory visits for flyers. As a result, Delta is increasing the price and requirements to enter its Sky Club airport lounges, which offer amenities like complimentary food and drinks, workspaces, and sometimes even showers, among other things. The company’s senior vice president of customer engagement and loyalty says it, “Wants to invest in our customers who invest in us.” More from CNBC.

🧠 A breakthrough in Alzheimer’s treatment. After decades of failure, a new drug called lecanemab, is offering hope to treat the most common form of dementia – Alzheimer’s. The treatment’s data suggests it slows the destruction of the brain, but it only works in the early stages, which is a challenge given early detection of the disease remains a major issue. The drug, developed by Eisai and Biogen, is already being assessed by U.S. regulators and the companies plan to begin the approval process in other countries next year. BBC News has more.

🗳️ House Democrats elect Hakeem Jeffries to succeed Nancy Pelosi. Rep. Hakeem Jeffries will be the first Black American to head a major political party in Congress, replacing Nancy Pelosi, who is stepping down next year. The Democratic party showed unity in choosing their new leader, with the closed-door vote ending in a unanimous decision. Many see the party’s quick transition and unity in the face of losing the midterm elections and House control as a sign of progress. More from AP News.

🏠 Airbnb’s new features assists renters in hosting apartments. The company’s new site page will list so-called Airbnb-friendly buildings allowing tenants to host their apartments the same way homeowners do. Generally, rental buildings prohibit tenants from subletting their space for short stays. However, many people already do this as a way to supplement their income amid rising home and rental prices. The new tool can help offer a new source of demand for Airbnb’s services and help those renting their space do so legally. CNBC has more.

Semiconductors remain a crucial focus for market participants as a leading indicator for the tech sector and global economy. As a result, when big names in the industry report earnings, they attract a lot of attention. 👀

Today we heard from Samsung Electronics, which saw its quarterly profits fall 69% to an 8-year low of $3.5 billion. Revenues also fell 8% to $57.3 billion. Analysts had expected the poor results given the company’s pre-earnings announcement earlier this month, but these were still difficult for investors to stomach. 🤢