Another Day, Another DAO…

The Litepaper is undergoing something of a makeover right now… a glo up if you will. New writers, new stories, but still the same ‘ol Litepaper — all about the news, price movement, and stories you need to know to navigate this complicated world of digital assets. As always, helpful conclusions are our mission here.

One thing we hope to impart as we take this next step in The Litepaper is how you can be more involved in crypto. We recognize that a healthy percentage of our readers are exclusively acquainted with crypto as it pertains to the buy and sell buttons on Coinbase, but there’s more to crypto than the lines on a chart going up or down…

Truth is: there’s an entire world of things to explore, discover, and be skeptical/bullish/bearish/[insert other adjective here] on.

That said, traditional and untraditional markets are feeling awfully correlated right now. The Nasdaq Composite, which tracks a lot of tech-oriented stocks, was down -4% today. You know what else was down -4% today? Ethereum, which looked ready to head lower after a volatile trading session this week.

Bitcoin wasn’t looking too hot, either. It was down -2%… and other cryptos followed suit with the crypto royalty: every top-10 crypto was down on the day and the week, including Terra, Solana, Ripple, and Avalanche.

In fact, the only crypto which was having a moment this week was ApeCoin, which rallied more than 30% this week given rumors about the new Otherside metaverse land sale. We’re now able to say that the land sale is expected to tee off tomorrow… and it’s bound to be pretty wild. Check back next week for a post-mortem.

In the meantime, there’s plenty to cover before you head out for the week. Here’s today’s top stories:

Here’s how the crypto market is looking as of this writing: 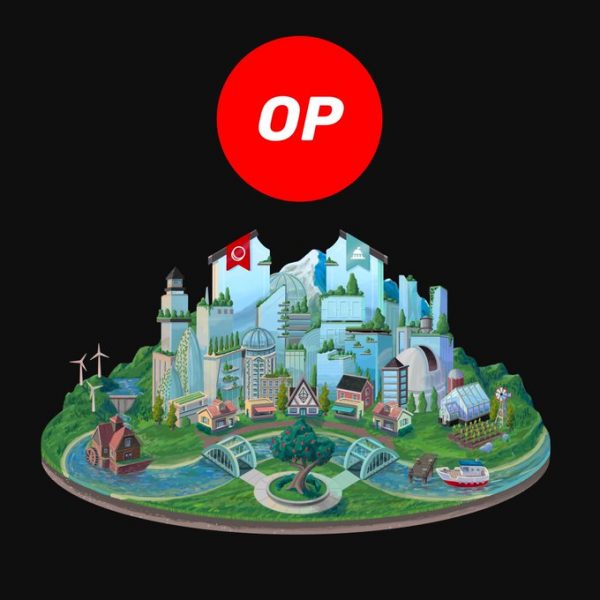 On Tuesday, Optimism announced that it would launch a decentralized autonomous organization (DAO) called The Optimism Collective. The DAO will govern the layer-2 Optimism Network, as well as the development of its Ethereum-adjacent ecosystem.

Optimism looks to use its newfound Collective to “increase the utility” of its chain (presumably via new projects and protocols) and increase “demand for OP blockspace”, which will go to funding more projects and “public goods.”

And with every new DAO comes a new token… and an airdrop, it seems.

The story is no different here. Optimism is launching the $OP token as part of its DAO rollout and restructuring. In the first airdrop, 5% of the OP token supply will be doled out to 264,079 early adopters and active Ethereum users. How much $OP each address or user gets will be decided based on a number of criteria. The date of the airdrop has not yet been announced.

There are fair odds that none of our readers will be lucky enough to get some of that sweet new $OP token. However, the Optimism team claims that this will be the first of “many airdrops.” According to the DAO’s governance page, as much as 19% of the initial $OP token supply will be allocated to airdrops, which means there could be some alpha waiting for users who become Optimism users in the months ahead.

If Optimism sounds completely foreign to you… don’t worry, you’re not alone. The lesser-known Ethereum-adjacent network exists to help users bridge their assets off of the very-expensive Ethereum network. By doing so, users can take advantage of Optimism’s patently-lower fees and faster transaction times. These are made possible thanks to the very imaginatively-named Optimistic rollups, a piece of technology which helps speed up Ethereum transactions.

That said, if you’re already an Ethereum user and meddle in DeFi (or want to get started), Optimism might be a good place to jump in. Ethereum is still the base-asset of the Optimism chain, meaning there are no new tokens or gas fees you have to acquire. You can just bridge Ethereum to get started. Jump in and read more about how to get started on Optimism’s website or see where money is stewing in Optimism DeFi on Coindix.com. Unfortunately for you NFT lovers, there’s little exciting about Optimism’s NFT ecosystem… but maybe that’ll change.

We’ll report on how successful the launch of the $OP is, and to what extent these new financial circumstances motivate development in the sphere of Optimism — as of today, it boasts over a $450.6 million in Total Value Locked (TVL) according to DeFi Llama.

The Ethereum Name Service (ENS), which powers the decentralized .eth domainspace, generated over $1 million in revenue from registration fees for three consecutive days.

One site which pools and aggregates daily fee data, and the seven-day average fees from decentralized apps and blockchains, is cryptofees.info. Today, the site had ENS as #4 on its list, higher than blockchains such as Avalanche and Bitcoin, and higher than DeFi protocols such as Aave, SpookySwap, and Compound.

At face, that accomplishment might not seem all that impressive. However, the fees which are accrued by blockchains, web3 projects, or protocols are often a strong indicator of usage. Besting the daily income of other blockchains and protocols, especially such important and upstanding ones, is something worthy of underscoring.

In short, it means that the Ethereum Name Service is having a moment. Earlier this week, the protocol’s 7-day average fees were sitting at $149,269. However, a number of things have sent ENS’s registration fees up and to the right. Among them are higher trading volume relating to demand for shorter .eth domains and speculation that Coinbase might be building a new “counterfactual wallet” system using ENS.

ENS has fetched some interest from media gurus, including our very own Litepaper newsletter, before this. When the ENS team announced its $ENS airdrop in November, many early adopters were welcomed to a five-figure payday from the protocol. However, since then, $ENS’s price movement has been extremely underwhelming: the crypto has crashed out of its former greatness, trading down more than -70%.

A controversy involving the team’s former Director of Operations, Brantly Millegan, didn’t do well to maintaining stability in the project or its price movement. Millegan was punted off of ENS’s adjacent development team, an organization called True Names Limited, after tweeting homophobic comments in February. His comments aroused complaint and selling from some of the Ethereum ecosystem’s most prominent players.

However, the Ethereum Name Service stands out as one of the most-valuable and most-utilized products in the Ethereum ecosystem. That is at least confirmed in-part by these rising registration fees, but also the roster of celebs and A-listers who have registered their own .eth domain. Among them are people like Jimmy Fallon, Paris Hilton, Ethereum co-founder Vitalik Buterin, Waka Flocka, and others.

NSA whistleblower Edward Snowden made waves in 2013 when he released a swath of privileged documents on the U.S. government’s surveillance state, which included programs designed to spy on citizens in the U.S. and other countries.

Some 10 years after his exile from the U.S., Snowden is living quietly in Russia. He helped start a nonprofit called Freedom of the Press in 2014 and spun up a Twitter account last year. However, besides the surprise appearance or comments about the surveillance state — and federal judgments saying that the program he revealed was illegal and potentially unconstitutional — we haven’t seen much about Snowden in the headlines…

Until about two days ago.

Snowden confirmed in a leaked video that he was one of the six individuals who helped create the cryptocurrency, Zcash. Snowden was apart of a “ceremony” which helped create the crypto and its patently strong security and privacy. Until now, the Zcash community knew Snowden as John Dobbertin, a pseudonym he invented for safety purposes.

Snowden says in the leaked video that he did it because he “saw it being worked on by a number of trusted academic cryptographers,” and thought it was an interesting project. He added that crypto has been used to “ensure it’s a fair ledger … rather than a private ledger.” He adds that he didn’t contribute to the crypto’s core product, but was simply involved in the cooperation of the “ceremony.”

Nearly six years after its initial release, Zcash has proven to be a strong, private alternative to Bitcoin. It takes after the world’s largest cryptocurrency in many ways: it has a supply limit of 21 million and a similar halving system. However, if not for Snowden and the five other members involved in the mysterious ceremony which helped build it, the $2.68 billion cryptocurrency might not have ever came to be.

$ZEC dropped 12.9% today, which we assume was unrelated to the Snowden news. After all, the market is kind of on fire right now.

The weekend was fairly flat for Crypto and today was mostly ‘meh.’

It’s summer, and the week before the 4th of July holiday, so that’s par for the course. However, the DeFi space is where the big action is currently taking place.

Bitcoin and Altcoins Bounce Back, But For How long?

Nice to see a mostly green day for crypto, and a (hopefully) green close to the week as well. Here’s what’s happening:

For eleven miserable weeks, crypto has done nothing but fall lower and lower. But crypto traders and investors may be in for at least a reprieve in the opposite direction as altcoins are leading the way to close crypto in the green for the first time in twelve weeks.

Newswise, it’s a bit of a mixed bag today. We’ll take a look at what Cardano founder Charles Hoskinson did in front of Congress yesterday, the Harmony hack, the crypto bounce back and NFTs in the gaming space.

Bitcoin and the broader crypto market remain in sucks-ville. Short-term hodlers who bought between $40,000 and $60,000 continue to feel the pain while long-term hodlers and investors are as happy as a fat kid in a candy store on a buy one get ten free sale.

Institutional interest in the crypto space continues to expand, despite the market remaining in major bear market conditions. So watching what the big dogs are doing can give the individual an early heads-up to where crypto may be going in the future.

A quick look at what the crypto market looks like today:

Breaking Down The Crypto Dumpster Fire

Whether you’re in stocks, crypto, commodities, currencies, or unicorn futures, no one is having a great week – or 2022, for that matter – and today saw no clear signs of that changing. For crypto investors and traders, the suck is particularly strong. The only people who probably feel worse are Hummer dealerships when gas is near $7 a gallon.

We’re going to take a look at what happened today, along with the good, the bad, and the ugly of the crypto market from this week.

Here’s a quick look at where the leaders in the crypto space are currently sitting:

This Week’s Buzzword Is “Solvency”

Today’s headlines may have been captivated by the Federal Reserve’s 75bp rate hike, but there’s been big crypto news in the past week.

We do our best to recap the top stories below. 👇