This Week’s Buzzword Is “Solvency”

Today’s headlines may have been captivated by the Federal Reserve’s 75bp rate hike, but there’s been big crypto news in the past week.

We do our best to recap the top stories below. 👇

That all said, here are today’s moves:

A Brief Summation Of Events

Earlier this week, Celsius, the cryptocurrency lending platform, said it would be pausing all withdrawals.

The memo posted on Medium stated: “Due to extreme market conditions, today we are announcing that Celsius is pausing all withdrawals, Swaps, and transfers between accounts. We are taking this action today to put Celsius in a better position to honor, over time, its withdrawal obligations.“

Given the recent events with Luna and the overall pain across the Crypto market, the move from Celsius does not appear to be inspiring confidence.

The company’s Celsius Token fell roughly 75% intraday on Monday to fresh all-time lows but has since recovered to just 94% off its all-time high.

This week’s problems appear to have started with Lido’s Staked Ether (stETH), a token pegged to Ethereum’s ETH. On Defi Platforms, it’s often used as collateral to borrow ETH, which works as long as the peg is maintained.

Earlier this week, that peg broke, with stETH trading at a discount to ETH as uncertainty about its upcoming merge grows.

Why does this matter to Celsius?

Well, Celsius locked customer funds into stETH, and with the de-pegging potentially sparking a wave of redemptions, the situation could develop into a liquidity crisis.

How this ends remains to be seen, but reports are that Celsius is seeking advice from lawyers on restructuring. Additionally, the firm has also sought the help of Citigroup.

And to add insult to injury, the company announced it would not be holding a “Twitter Spaces” this week. 🙃

The future of crypto hedge fund Three Arrows Capital is reportedly facing potential insolvency after being liquidated by its lenders.

Sources say the liquidation totaled at least $400 million and the firm is in the process of figuring out how to repay lenders and other counter-parties.

The co-founder and CEO, Zhu Su, took to Twitter on Tuesday night to address rumors about the firm’s solvency.

Needless to say, this did little to inspire confidence and further stoked the speculative flames around the company’s status.

The firm reportedly managed ~$10 billion at the market peak but has suffered major losses.

We will be watching how this plays out, given many in the crypto community closely followed Zhu’s thoughts and actions as an ardent crypto bull. For example, in February 2021, he suggested that bitcoin’s price could go as high as $2.5 million per coin.

However, given the downturn in the space, he was forced to address his supercycle bull case on the crypto market in May. He then stated that the “Supercycle price thesis was regrettably wrong, but crypto will still thrive and change the world every day.”

Eyes will be on his firm until there’s a resolution, especially given the growing list of high-profile blowups in the crypto space.

Additionally, the total crypto market cap fell below $1 trillion for the first time since January 2021.

Below is a chart showing the total drawdowns in previous bear markets and how long it took for prices to make new highs.

While the total crypto market decline is approaching similar levels we’ve seen in the past, if history repeats itself, it may be a while before we see fresh all-time highs. 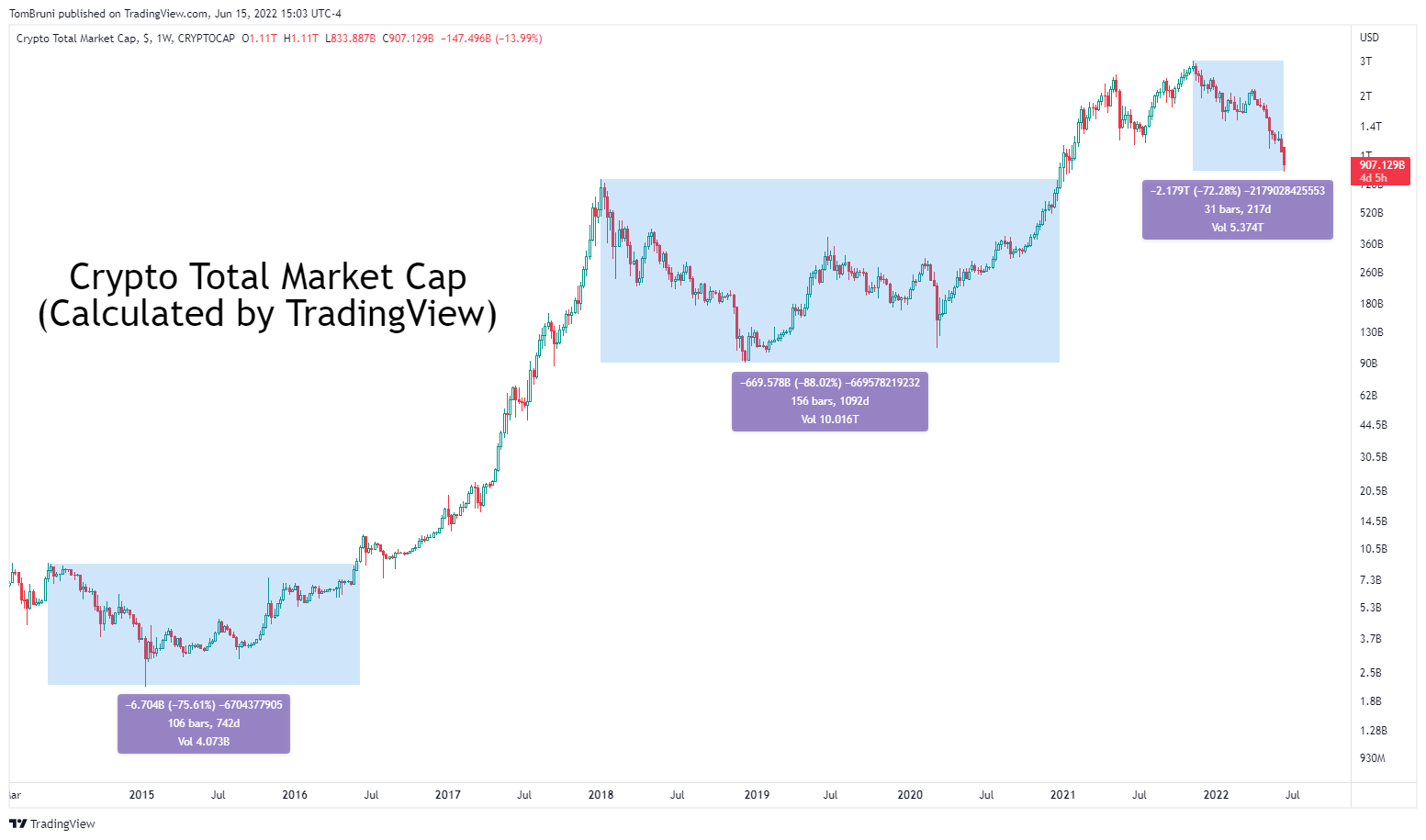 Coinbase is in the news, with posts from former employees littering social media after learning they’d been laid off or had offers rescinded. Overall, the company reduced its workforce by 18% this week, roughly 1,000 employees, as CEO Brian Armstrong says the company prepares for a recession and “crypto winter.”

Additionally, BlockFi announced a 20% cut to headcount. The announcement comes just a week after reports that the company is raising a down round at a $1 billion valuation, just a year after its last raise at a $3 billion valuation.

Last week, Crypto.com also laid off 5% of its workforce or 260 employees.

While some firms are downsizing, others are playing offense.

Binance CEO, Changpeng Zhao, says the company is using the downturn to its advantage. The crypto exchange has opened 2,000 positions for hiring, a position it’s afforded by staying frugal throughout the recent bull run.

Additionally, Kraken says it’s filling 500+ roles in the remainder of 2022. The company stated in a blog post, “[We] believe bear markets are fantastic at weeding out the applications chasing hype from the true believers in our mission.”

Internationally, Indian exchanges are on a hiring spree as well.

As it appears no one and nowhere are safe from the crypto-dip, the future of so many relied-upon companies around the world remains in question. We will keep monitoring this and update regularly.

💰 NFTPort raises $26m series A. The non-fungible token (NFT) infrastructure company’s new round was co-led by Taavet+Sten and Atomico. The funding will scale the core product, which helps developers quickly launch NFT applications. CoinDesk has more.

💸 Words with friends co-founder launches Web 3 game studio. Paradigm led the $46m round for The Wildcard Alliance, a subsidiary of Playful Studios, which Paul Bettner founded. Other participants in the round included Griffin Gaming Partners, Polygon, and venture capitalist Sabrina Hahn. More from CoinDesk.

👎 Bill Gates is not a fan of crypto. Speaking at a TechCrunch talk on climate change, he described crypto and NFTs as something that’s “100% based on greater fool theory.” He made it clear he’s not invested in the space, saying, “I’m not involved in that” and “…I’m not long or short any of those things.” CNBC has more.

Lordstown Motors had a volatile trading session, ultimately closing up 1.71% after releasing its second-quarter earnings report.

The electric truck startup reaffirmed plans to begin commercial production of its first vehicle this quarter and roll out the first deliveries by the end of the year. However, its CEO Edward Hightower said production would be slow and heavily reliant on capital availability. It expects to produce about 500 vehicles through early 2023, which is very slow by industry standards. 🐌

It was a long day for some of retail’s favorite stocks; let’s quickly recap.

AMC shares fell 11% after reporting another net loss and revenue below analyst expectations. However, the company is making another financial engineering bet, opting to list preferred equity shares on the NYSE under the symbol “APE.”