The weekend was fairly flat for Crypto and today was mostly ‘meh.’

It’s summer, and the week before the 4th of July holiday, so that’s par for the course. However, the DeFi space is where the big action is currently taking place.

First, here’s how the cryptocurrency market is looking today:

Oh man, where to begin? It seems like every twelve hours, there’s some new major development in the DeFi space, specifically with one of the biggest crypto hedge funds, Three Arrows Capital.

Popular cryptocurrency lending and high-yield platform Celsius paused all customer withdrawals earlier this month, stoking fears that it may be insolvent. The initial trigger was the collapse of the algorithmic stable (lol) coin, TerraClassic USD ($UST.X). The result has been a contagion of exposed cryptocurrency companies and platforms.

With Celsius at risk of bankruptcy, a leading investor group within Goldman Sachs ($GS) is reportedly circling the dying crypto firm and poking it with a stick to see if it’s dead yet. Goldman wants to raise $2 billion to scoop up Celsius’s assets on the cheap. However, another crypto lending firm, Nexo ($NEXO.X), already put in an offer last week.

Today, cryptocurrency platform/exchange/wallet Voyager ($VYGVF) served Three Arrows Capital a notice of default. Three Arrows Capital had until today to repay the entirety of a $650-ish million loan. Voyager did secure a $500 million Line of Credit from Alameda Ventures in the interim.

Also, Morgan Creek Digital wants to get in on the poking wounded crypto firms with a stick game. BlockFi ($BLOCKFI.P) got a $250 million credit line from crypto exchange FTX last week, with the latter having the reported option to acquire BlockFi at no cost. But, of course, Morgan Creek already has exposure to BlockFi, so if FTX exercised the takeover, Morgan Creek would literally be up Schitt’s Creek.

We’ll keep you updated to who wins out and who gets screwed. 🤬

Harmony’s ($ONE.X) Horizon bridge hack of $100 million is still unsolved, and Harmony is now offering up to a $1 million bounty for anyone who has information on who stole the crypto. Additionally, they said they would not pursue legal action if the hacker(s) returned the money.

Would you return $100 million in stolen crypto? The largest crypto heist was almost one year ago, in August 2021, with $610 million taken from the Poly Network (not to be confused with Polygon). The hacker did return the money and received a job offer, too.

The $1 million bounty is getting ridiculed on social media. For example, Twitter user @0xCornpocalypse suggested, “Harmony must offer at least $8 million”. Another user, @furrybtclover, likewise scoffed at such a small reward related to the amount of the theft.

I don’t think you’ll see Mandalorians clamoring for that contract. 🤣 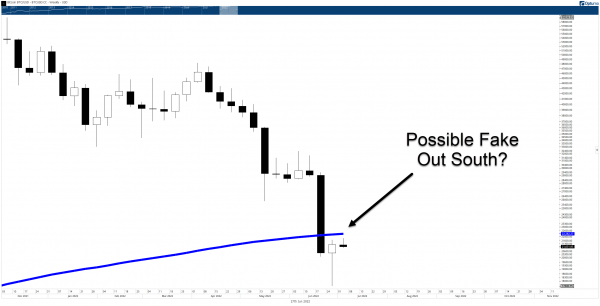 The image above is Bitcoin’s ($BTC.X) weekly chart. Last week’s candlestick pattern is known as a ‘Bullish Hammer.’ For candlestick traders, this is the kind of pattern that makes them froth at the mouth and convulse with excitement. The ‘Bullish Hammer’ is interpreted as an extremely bullish setup that can often indicate a reversal.

However, the blue line on the chart is where the focus should be. The blue line is the 200-period weekly moving average. Bitcoin closed below that level two weeks ago and failed to move back above last week. So why is this a big deal?

We’re looking at the beginning of a major breakdown south and below the $20,000, or, more likely, a nasty fakeout that will trade a good number of shorts.

No matter the direction, it’s going to be epic. 🔥

🪙 India cryptocurrency company, CoinDCX, has restricted crypto withdrawals from their platform. Deposits and withdrawals in Indian rupees are still available, however. CoinDCX reported that liquidity issues are not a concern and that the freeze on crypto withdrawals is due to compliance issues. Read more at forkast.

🎤 Bored Ape Yacht Club’s (BAYC) ApeCoin ($APE.X) spikes more than 30% after getting a spot in Eminem and Snoop Dog’s recent music video. Whether this move has any staying power like the two rap legends remains to be seen – but not likely. However, Snoop Dog does have a strong business relationship with BYAC. See the full story at U.Today.

💵 Crypto firm Azuro raised $4 million to build a blockchain-based, decentralized betting platform. Its main net has already launched on the Gnosis network ($GNO.X) with plans to expand onto the Polygon ($MATIC.X) network. Check out theblock for more information.

In the wake of Terra’s Luna ($LUNA.X) and TerraUSD ($UST.X) collapse, one of the most well-known crypto-centric hedge funds, Three Arrows Capital (3AC), likewise crumbled. But it didn’t stop there.

Collateral damage (pun intended) from 3AC’s downfall saw some of the biggest names in the crypto lending business rupture and shatter: Celsius ($CEL.X), Voyager ($VGX.X), Genesis, BlockFi ($BLOCKFI.P), and a myriad of other companies and crypto exchanges.