Crypto Fights Back To $1 Trillion

It looks like crypto bulls dodged the Sunday Selloff that is all-too-common in the crypto space – instead, bulls got an altcoin weekend rally that extended into Monday.

But the most important event was a return to a $1 Trillion market cap – we’ll discuss that in today’s Litepaper, along with Axie Infinity’s huge +40% spike and a slight hiccup in Cardano’s network over the weekend.

Green across the board today, with a noticeable gap in performance between the top three performers today compared to the rest – that’s altcoins for you, though.

One of the most anticipated and critical technical events for crypto occurred over the weekend: a return to a $1 Trillion market cap. 🤩

$1 Trillion is a critical level for one primary reason beyond its psychological importance: $1 Trillion is the price level that cracked when FTX collapsed.

For many analysts and pundits, the current price action behavior for Bitcoin and the broader crypto market is at a make-or-break point.

Hitting $1 Trillion is great – but many analysts believe that closing at or above $1 trillion on a weekly or monthly time frame is more important.

Since Friday (January 20, 2023), the Total Crypto Market Cap has hit and exceeded $1 Trillion for each of the past four days – but has yet to close at or above $1 Trillion.

Input Output Group (IOG) explained, “This appears to have been triggered by a transient anomaly causing one of the two reactions in the node; some disconnected from a peer, and others threw an exception and restarted. Such transient issues (even if they were to affect all nodes) were considered in the design of the Cardano node and consensus. The systems behaved exactly as expected.”

In other words, this was a problem/issue that developers saw and had plans already to address.

The recovery went so fast and so well that SundaeSwap’s CTO even took to Twitter to address the event:

The real takeaway for me is how impressively resilient the cardano network is. Something took down ~60% of nodes and the network recovered in a few minutes, and continued producing blocks throughout. https://t.co/PzsYJiSIOH

If investors/traders/analysts were concerned, that sentiment has not been reflected in Cardano’s price action. If the network had to be shut down, then we might have seen a different story.

Cardano is attempting for a fifth consecutive day higher and remains up over +58% for January 2023. 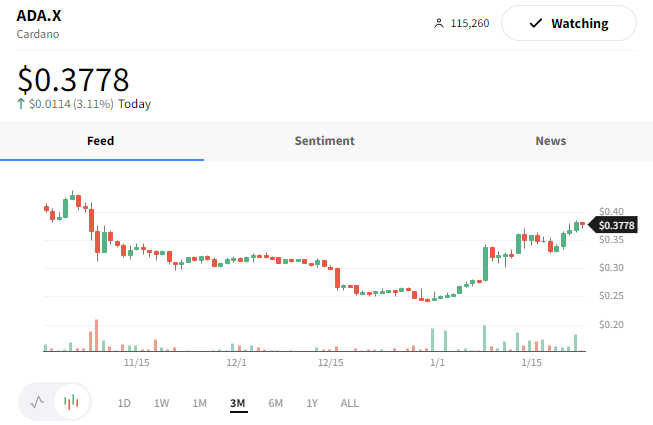 The launch of Cardano’s algorithmic stablecoin, DJED, is still planned for a release this month – but no official date has been announced. 📣

In Saturday’s Litepaper, we looked at the three top-performing crypto indices and the worst-performing index over the past seven days.

The NFT Index was last week’s best-performing crypto index for the second week in a row, with an +11.9% gain. If we looked at the NFT index today, it would still be in first place, and it’s up +14.51% over the past seven days – due mostly to Axie Infinity’s ($AXS.X) +40% gain on Sunday. 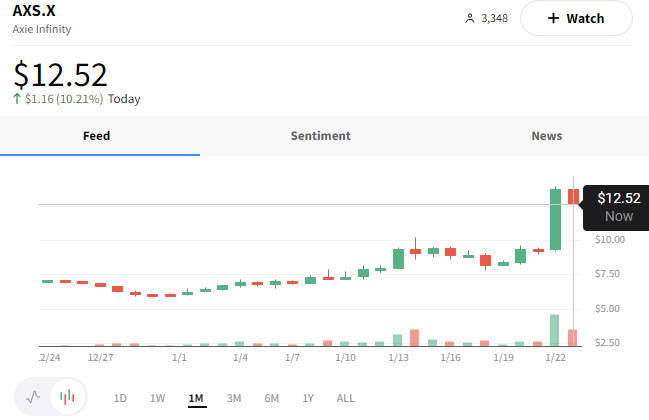 From a fundamental perspective, analysts attribute the spike to an increase in the governance token AXS: roughly 2% of the entire supply unlocked.

Usually, increases in supply have brought in selling pressure – Axie Infinity is down -10.19% from the intraday high and currently down -0.33% for today.

However, some analysts believe that the selling may be limited because of who received today’s unlocking distribution. Why?

Because today’s unlock was only distributed to wallets earning staking rewards – in other words, people already hodling AXS.

Oh, and here’s a random fact about Axie Infinity:

An article today from Bitcoinist shared a tweet from Loopify that reminded everyone that AXS’s NFT collection is still the largest traded NFT collection:

😂 Bitcoin hater Peter Schiff tells hodlers to sell; Bitcoin spikes 30% instead. The crypto critic that the crypto community loves to hate, Peter Shiff, has a history of foot-in-mouth tweets regarding Bitcoin’s price action. The latest is from a January 12, 2023 tweet when Schiff tweeted that Bitcoin “… is trading above $18K, its highest level in 3 weeks, an excellent opportunity for #HOLDers to sell ahead of the release of the Dec. #CPI…” Since then, BTC has rallied more than 30%. Finbold has more.

🤔 Remember the ominous and vague press conference announcement from the U.S. Justice Department last Wednesday? Neither does anyone else. It was a big nothing-burger that generated a little FOMO – but there was some real meat to the announcement. The U.S. Justice and Treasury Departments charged a crypto exchange no one has ever heard of, Bitzlato, with money laundering and arrested its founder in Miami. Europol also announced that senior executives were arrested in Spain and Cyprus, with additional searches in Portugal and France. They are accused of laundering an estimated $1 billion tied to sanctioned and illicit Russian finance. More from CoinDesk.

😖 Binance can no longer support U.S. Dollar deposits and withdrawals through SWIFT unless they are over $100,000. Binance’s primary bank used for SWIFT transactions, Signature Bank ($SBNY), said this is their new policy. Binance reports they are actively seeking a new partner. Signature Bank’s retreat from the crypto space follows another big name in the crypto space, Metropolitan Commercial Bank ($MCB). It announced they are winding down its crypto exposure in early January. CryptoNews has more.

☢️ Nuclear-powered Bitcoin mining in the U.S.? Yup that is happening. Cumulus Data, a subsidiary of Talon Energy ($TLA), completed the Cumulus Susquehanna facility in Pennsylvania and expects to start hosting nuclear-powered Bitcoin cloud and mining services in Q1 2023. A partnership between Talen Energy is expected to provide 50 megawatts of net mining capacity to their partner, the U.S. BTC miner TeraWulf. More from Forkast.

🕵️‍♀️ The biggest US surveillance program you didn’t know about

😑 Bernstein: The bounce in cryptocurrencies is a ‘mean reversion’ rally

😞 Gemini lays off 10% of staff amid troubles at Genesis, DCG: The Information

The Suspense Is Palpable

It was another week of green for the crypto market, though gains were pared back as we approach next week’s highly-anticipated Federal Reserve meeting. 😬

In today’s Litepaper, we take one final look at inflation before the next interest rate decision, provide an update on the Celsius Earn situation, and update the top 10 market cap staking yields. Buckle up; we’ll run through this so you can enjoy your weekend. 👍

Fakeout Or Breakout? The First Test.

Admit it, you thought yesterday’s close meant today would be another red day. 🔴

Crypto investors/traders are conditioned to expect that price behavior – and when it doesn’t happen, there’s a collective sigh of relief.

Welcome to the Stocktwits Crypto Data Dive for Week 3 of 2023!

Well, the market looked absolutely awesome earlier this morning – but that happy outlook quickly turned around as we got later into the trading day.

If you’re looking for a couple of fundamental reasons why price got slapped around today, we’re going to look at one of those reasons in today’s Litepaper: Gemini is reportedly filing for bankruptcy.

Green day and a green week! So green, in fact, that this week’s close is the strongest since the week of October 24th, 2022. 🟢

Today’s Litepaper is full of beautiful technical analysis with levels analysts are looking at. Also, we’ll dive into the ongoing Gemini vs. Genesis vs. SEC debacle.

Analysts watch consumer spending closely, as it accounts for roughly 68% of GDP. It increased by 2.1% in Q4, down from 2.3% in Q3. Inventory also rose significantly, adding 1.5% to GDP. Government spending also buoyed the headline number, adding 0.64%.