Crypto Market Stuck in the Red

Happy Thanksgiving, y’all! As we edge up to the holiday, crypto investors are busy doing two things: a) booking profits for the year-end and b) shopping for early Black Friday sales.

Crypto markets continued to face massive price corrections as the week started over the hump. $BTC.X was somewhat stable after a bit of a dip, trading around $57,000 today. $ETH.X dropped a little, hovering at $4,200.

A silver lining did emerge from the metaverse and gaming tokens like Decentraland ($MANA.X) and The Sandbox ($SAND.X), which saw spikes of over 30% and 40%, respectively.

Let’s take a look at today’s headlines to set you up for a great holiday:

Check how the major cryptocurrencies are performing:

The Modi government is set to introduce a crypto bill in the upcoming parliamentary session, and it seems it may ban private cryptocurrencies and allow the country’s central bank to launch an official digital currency.

According to a bulletin posted on the Indian parliament’s official website, “The Cryptocurrency and Regulation of Official Digital Currency Bill, 2021,” will prohibit all private cryptocurrencies in India and create a framework that would facilitate the creation of a central bank digital currency (CBDC).

The language of the bulletin is unclear and leaves a lot of room for interpretation. For instance, the bill didn’t specify what is meant by “private” cryptocurrencies. Does it mean major cryptocurrencies like Bitcoin and Ethereum, or does it include only tokens? Also, the bulletin said it would allow for “certain exceptions to promote the underlying technology of cryptocurrency and its uses.”

As if that weren’t enough, Prime Minister Narendra Modi’s made a recent statement that has added tensions over the future of cryptocurrency. In a virtual address at the Sydney Dialogue, he stated: “Take cryptocurrency or bitcoin, for example. It is important that all democratic nations work together on this and ensure it does not end up in [the] wrong hands, which can spoil our youth.”

The uncertainty triggered panic selling across the board, with $BTC.X and $ETH.X crashing over 20%. Crypto exchange Wazrix’s servers were fried as investors rushed to sell their holdings. Some traders took advantage of it and bought the dip.

Experts have expressed disappointment with the bill but are hoping for the bill will actually be a bit more progressive, allowing investors to (at least) trade all cryptos. All eyes are now on the winter session of the parliament, which will start on Nov. 29.

eToro Removes Cardano And Tron Due To Regulatory Concerns

eToro, an Israeli cryptocurrency exchange, announced that it would delist Cardano ($ADA.X) and Tron ($TRX.X) for its U.S. customers by the end of the year. As of Dec. 31, U.S. users cannot open new positions or stake ADA or TRX. Furthermore, wallets will be limited to withdrawing only until the first quarter of 2022, when the selling will also become restricted. eToro cited regulatory concerns surrounding both assets as the reason for its decision.

“The regulatory landscape for crypto is evolving rapidly. As a result, we will be limiting the ability for U.S. users to open new positions in, or earn staking rewards for, ADA and TRX,” said an eToro spokesperson.

The news came as a surprise to the community as both cryptocurrencies have traditionally been free of regulatory problems. Last week $ADA.X was listed on the Luxembourg exchange BitStamp. Today, $TRX.X tumbled by over 5%, while traders sold off $ADA.X, sending it down over 9%.

Cardano, which was founded in 2015, has soared this year. Although, it has faced challenges in the past few months. It reached its peak in September at $3.10, following an upgrade in its smart contract. Today, it was hovering around $1.60.

$TRX.X, the native token for Chinese-American entrepreneur Justin Sun’s TRON Foundation, is the 33rd largest cryptocurrency by market cap. It was trading around $0.09 today.

What is Play-to-Earn Giant Axie Infinity?

If you told somebody that you could make money from playing video games, they’d think you’re crazy. But now it’s true — thanks to blockchain technology.

Play-to-earn has become a popular model in the crypto world where players can earn real money or rewards by playing. The players gain control over in-game assets and can increase their value by playing the game. As a reward for participation, they can earn tokens and NFTs.

One example of a successful play-to-earn gaming project is Axie Infinity. It’s a blockchain-based game inspired by the Pokémon series where players buy NFTs of monsters and then battle them against each other.

To play the game, the player first creates an account on the Axie Infinity website and downloads the game to PC, Mac, Android, or iOS. Then, the player buys three Axie NFTs, which are required to create the first team. These Axies can be purchased from the Axie marketplace via your Ronin wallet connected to the game. Axie’s yield rewards are named Smooth Love Potion ($SLP) crypto tokens that can be exchanged for money.

Play-to-earn might sound crazy, but it has emerged as a way of living for many people. The game has helped rural communities in the Philippines, who lost their jobs due to the ongoing pandemic. Axie Infinity allowed some people to survive by rewarding players with tokens. The players traded the cryptocurrency for fiat currency, creating a way to earn a living.

Axie Infinity hit a record $1.1 billion in sales — a new record for the highest-grossing NFT project ever. 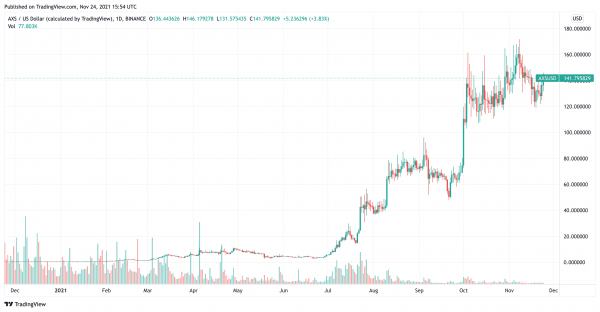 According to TradingView, Axie Infinity has grown 750x in just one year. Play-to-earn may sound unrealistic, but blockchain-based gaming is a new era of the crypto economy.

Tesla CEO Elon Musk’s love for Dogecoin is no secret. But yesterday, the Dogefather became overprotective of his favorite cryptocurrency and confronted Changpeng ‘CZ’ Zhao, Binance’s CEO, with some tough questions.

Musk got into a Twitter fight with CZ regarding issues about Dogecoin withdrawals on Binance. Earlier this month, Binance users said that the crypto exchange was not allowing them to make any withdrawals until they returned Dogecoin. In a tweet, Musk asked Binance’s CEO, “What’s going on with your Doge customers? Sounds shady.”

After a few minutes, Binance’s official Twitter issued a response: “The root cause is a technical issue during the recent upgrade process that caused old transactions to be resent to 1,674 users.” In other words, Binance claims nothing shady is going on.

But Binance’s response didn’t satisfy Tesla’s CEO as Musk kept typing, “Doge holders using Binance should be protected from errors that are not their mistake.” Musk cited a thread on Dogecoin Developers, which explains that the issue started a year ago.

At this point, Binance’s CEO lost patience, targeting Musk’s own company’s issues, referring to Tesla’s October software glitch. Zhao tweeted: “Elon, we are pretty certain it is an issue with the latest #doge wallet. We are in communications with the devs. Apologies for any inconvenience that may have caused you.” Before ending his tweet, he added, “What happened here?” alongside a link to Tesla’s software glitch that caused nearly 12,000 Tesla cars to be recalled over safety concerns.

This isn’t Musk and Zhao’s first spat. Zhao said earlier this year that he was surprised Elon was even an advocate of Dogecoin. In another interview, Zhao said that Musk should be more cautious about his tweets on cryptocurrencies.

It’s Not Time To Jump Off The Crypto Coaster Yet

It’s Monday, and we’re back! There was little relief in the cryptoverse today, as the market recovered from Saturday’s monster dump. Investors are cautiously buying again after the downturn in global stock markets spilled over into the nascent crypto market.

Bitcoin ($BTC.X) came close to crossing the $50k mark today but fell short at the last moment, ending 15% down from last week. Ethereum ($ETH.X) managed to cross $4,100 but continued to struggle the entire day. A few altcoins recovered after the weekend’s bloodbath, but it wasn’t enough to lift investors spirits — more on that below.

As we hope to see signs for a rally this week, here’s what’s on our radar today:

I Dip, You Dip, We Dip, Crypto Dips

What a Friday, folks! As the week comes to a close, the crypto market continues to plunge deeper into the red.

Despite major cryptocurrencies drifting lower, one coin, Terra ($LUNA.X), caught the attention of the investors as it gained 7%, making it to the coveted top-10 cryptocurrencies list (as measured by market cap). Terra’s promotion stemmed from the coin’s recent network upgrade and upcoming changes to how the coin is used in its own payment network.

Happy December! Can’t believe that 2022 is just around the corner… and just as time marches on so does the ebb and flow of the cryptoverse. As we tip to the other side of the week, the market is looking stable, despite Omicron variant fears prompting a yo-yo from gains to losses in major cryptos.

Let’s hope the crypto market rallies again and see what we have in-store today:

Happy Monday. We’re starting off in the green this week, with a rebound in the crypto market after speculation that Covid’s new glo-up variant, Omicron, is not as bad as other variants. A number of cryptocurrencies jumped by double digits today, pointing to a market-wide crypto recovery.

The other talk of the day, of course, is that Jack Dorsey is leaving Twitter. Experts believe that the bitcoin-maxi will shift his full attention to his favorite cryptocurrency. We’ll be watching you, Dorsey!

Happy Friday, y’all. Given fears about a new COVID-19 variant, cryptocurrency markets saw a bloodbath today, akin to a Black Friday sale. It’s likely to haunt equities and crypto world for the weekend.