Good evening, all! It’s a lazy start to the week for crypto. The top-10 cryptocurrencies looked lazy today. This trend comes as traditional markets are steering clear of the Chinese rate cut and remaining risk-averse.

The only exception was Terra ($LUNA.X) which saw its new peak today – leaping 4% today to all-time highs and reentering the top-10 largest coins by market-cap as the ninth ranked coin. Here’s the daily chart: 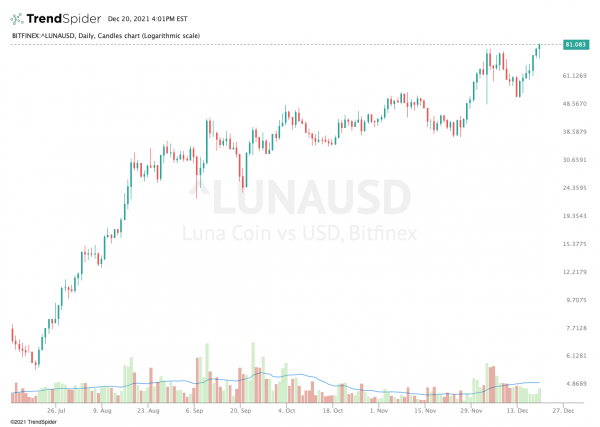 With a wish for joy on this holiday season, let’s see what we have so far:

Is the future of finance digital?? 2021 certainly makes that seem like a possibility, since venture capital funds have dumped over $30 billion into cryptocurrency-related investments this year — the investment in crypto in 2021 outpaced all previous years’ crypto investments combined. 🤭

For comparison, just $8 billion was invested in the crypto space in 2018 (towards the end of Bitcoin’s historic run and the ICO rush.) A GP at Blockchain Capital LLC, Spencer Bogart, commented on investors’ rush to crypto projects:

“We’ve moved beyond just digital gold. We’ve got financial services, art, gaming as a subcategory of NFTs, Web 3.0, decentralized social media, play-to-earn — all of that made investors think, `We don’t have enough exposure.’ ”

The general cryptocurrency market added $1.5 trillion to its total market cap in 2021, and Bitcoin wasn’t the only big winner. The market value of the entire crypto market is up to $2.3 trillion with representation from over 12,000 different tokens. Bitcoin’s total market share started January off at 70%, but the cryptocurrency’s share has since fallen to 40%.

Along with the crypto surge comes a debate about crypto’s ‘functionality.’ Many investors feel that cryptocurrencies are a clear hedge against rising inflation, but crypto’s volatility and correlation with tech stocks challenges that view. Check out this graphic from Bloomberg: 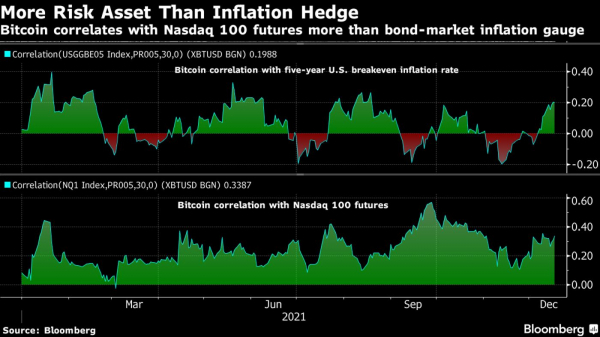 Is crypto destined to climb higher? Or are cryptocurrencies risky assets rising at the right time and place?? Only time will tell. ⏳

There are two common ways to buy crypto: buy it yourself (using a crypto exchange) or buy a fund (on the stock exchange). As it would turn out, there’s a common language in get rid of it: just sell whatever you bought — whether that’s a coin, a fund, a derivative, or a futures ETF.

For the first time in 17 weeks, weekly crypto asset flows into traditional investment vehicles were negative. Outflows totaled $142 million for the seven days through Dec. 17. It erased the previous week’s inflows, but hardly put a dent in the long-run inflows to funds tracking coins such as Bitcoin, Ethereum, and Solana. 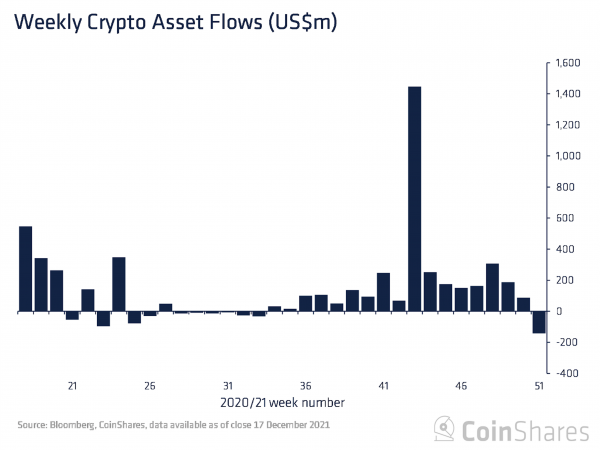 Traditional investment vehicles are somewhat at odds with the ideals of decentralization (and some would even say that they run against the ideals of crypto in general). However, for investors wanting exposure to the asset class (and not wanting to do much work beyond owning it), traditional fund styles have become popular, specifically among RIAs, wealth planners, and people who prefer that the fund manager do most of the taxes for them.

Outflows offer some cause for concern, given valuation discrepancies in some funds (such as the Grayscale Bitcoin Trust.) The fund manages nearly $30 billion in assets, but its market price per share is considerably lower than its holdings value per share. In other words, the value of the assets in the fund are “discounted” — the total value of the assets are not being fully realized for investors for any number of reasons.

Ultimately, the price of having a company custody and handle your crypto is hefty management fees (often in excess of 2%.) And to make matters worse, many funds require minimum deposits or accredited investor status. That’s probably one reason why recent dips have sowed doubt among fund participants. Given how the market is going, this probably won’t be the only week of outflows.

A Ray of Sunshine on a Cloudy Day

The massive sell-off in the holiday season makes it difficult to predict which cryptocurrency will perform in the coming weeks. Here are some coins catching serious momentum in the markets:

Terra is a leading blockchain project that allows developers to build decentralized apps. Its ecosystem is comprised of collateral-backed stablecoins, which are backed by the LUNA token. Its emphasis on stablecoins has given it a unique advantage in the world of crypto, allowing it to grow into the second-most popular development platform for DeFi developers.

As a result, its native token $LUNA.X has been climbing the ranks of the largest cryptocurrencies in recent weeks. Chapin Partners CEO Jake Cormack credits Terra’s growth potential with the company’s decision to choose them as their official public ledger, particularly after the Columbus-5 upgrade, which promises greater interoperability between different blockchain networks and aims to improve the efficiency of the global payment system.

Additionally, Terra’s dollar-pegged stablecoin, UST, has become the number four stablecoin by circulating supply (there are $9.14 billion in circulation.) It still sits behind DAI, the leading algorithmic collateral-backed stablecoin. Given these developments, investors are feeling increasingly confident with the growing blockchain network.

Yearn Finance, one of the foremost Ethereum-based DeFi protocols, announced plans to aggressively buy back its native token, $YFI.X. Yearn Finance announced yesterday that they had purchased $7,526,343 of YFI on the open market at an average price of $26,651. This has resulted in the price of the token increasing dramatically.

Theoretically, a buyback reduces the number of outstanding tokens, which causes a price increase if demand is strong. Since Yearn Finance wants to buyback as many $YFI.X as it can, there is reason to believe why the coin is surging. In today’s trading, the token ($YFI.X) jumped 22%, hovering around $39,000. This marks an increase of 90% week-over-week. While the token has surged, it is still well below its all-time high ($90,786) in May 2021.

HEX has attracted crypto traders by offering returns for securing their holdings for a period going from one to 5,555 days, which the developers liken to a “certificate of deposit” (CD). In traditional banking, CDs are products which yield a higher return than a savings account, but customers agree to lock up their funds for a set period. HEX CDs are similar to traditional CDs in that they pay a return to investors who decide to lock up their HEX holdings for a set period of one day to several years.

$HEX.X rose 20% today, hitting a price of $0.26 and a market capitalization of $46 billion. However, the crypto community largely believes that HEX is a scam. There are no shortage of articles about HEX being a “ponzi scheme” or having “scam dynamics.” An article by Cointelligence published in June 2020 attempted to document some of their qualms and misgivings with the project (and its creator). The project has a page dedicated to whether it’s a scam, which reads as a sales pitch rather than a direct answer to the question.

That said, though it’s on our “ones to watch”, we would generally recommend caution when speculating on coins making promises of getting x% returns, or being paid certain rewards.

After a dark weekend in crypto, crypto looks like it’s dimming even more, and there’s no light in sight. In the aftermath of a harsh sell-off, the value of the global crypto market has shrunk by $1 trillion.

The crypto market started the morning in the red, causing many investors to buy the dip, resulting in a slight recovery as the day drew to a close. Buying momentum on U.S-based exchange Coinbase was 70-80% on major pairs, according to the company’s on-site analytics.

Bitcoin ($BTC.X) rose by a touch over 2% today, hitting staying above $36,500. However, earlier in the day, the crypto dipped below $33K, its lowest point since July. Investors fear it might test those lows again in the coming days.

Crypto Winter Is Here To Stay

Well, that was a week! 2022 began with Bitcoin experiencing its worst annual start in history and it hasn’t gotten any better from there. The largest cryptocurrency sank towards its six-month low on the heels of the Russian Central Bank proposing to ban crypto mining for all cryptocurrencies.

Despite the sense of despair that we’re smack in the middle of Crypto Winter, it’s not entirely a red wedding. Trading platform Robinhood is now rolling out its crypto wallets to some users and Twitter is embracing NFTs with new profile-pic features.

Crypto Keeps On Keeps On Being Bearish

Well, we’re back and the time off did not invigorate the crypto-trading world at all.

Now halfway through the week, cryptocurrencies are still holding up the dip. Market-wide selloffs have wiped out billions off the crypto market cap, which has tumbled to $1.95 trillion. ​​The bearish sentiment comes on the heels of U.S. Treasury yields reaching two-year highs, which have also been faulted for pulling down high-flying stocks.

Happy Friday! We have some good and some great news to share with you. First, the crypto market is all green, which offers hope that the coming holiday weekend will be amazing. Second, Tesla is now accepting Dogecoin ($DOGE.X) for merchandise payments. That’s why $DOGE.X went to the moon today, with a 16% jump.

Happiness was not confined to the crypto market’s favorite memecoin, though. Bitcoin ($BTC.X) jumped a little, trading at $43,000. Ether ($ETH.X) maintained its value at $3,300. Other major cryptocurrencies performed well, up between 1-3% on average.

Before you go out to celebrate tonight, here’re today’s top stories:

Happy Hump Day! After tumbling for days, the crypto market has finally pulled itself back on its feet – just as the Federal Reserve promised Congress it was taking steps to combat rising inflation. Maybe crypto is being treated as a risk asset again?

However, there’s still plenty of room for cryptocurrencies to rebound as their prices are still below the past week.