Despite yesterday’s relief rally, the market appears to be turning on Powell and the Federal Reserve again.

Papa Powell tried to soothe the market with a 75bp rate hike and some smooth talk, but after some time to mull over his message, the market isn’t buying it.

Recession fears are picking up around the globe, with stocks making new cycle lows across many U.S. and international indexes. Risk-off action is occurring simultaneously as many central banks are raising rates at their most aggressive pace in decades to curb record-high inflation. 🥵

Mark Another ‘Win’ For Ripple Against The SEC

This great chart from global-rates.com summarizes them all. 📈 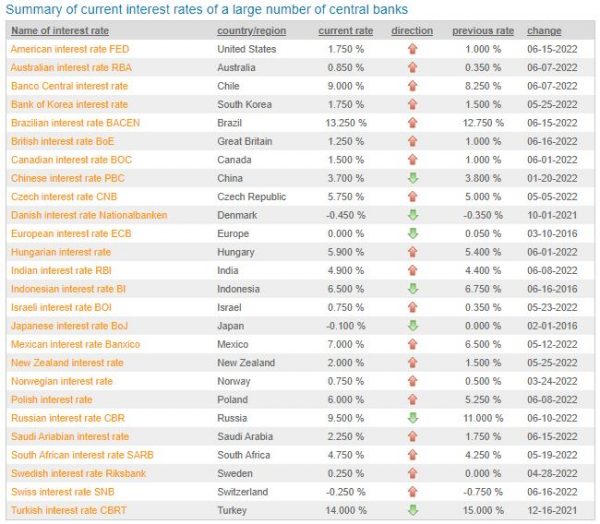 Commentary from many of these central bankers suggests that they will fight hard to bring inflation down, even if that means sacrificing some economic growth.

This view contrasts their thoughts from just a few months ago that bringing inflation down while keeping the economy intact was not only possible but probable.

Some say that the unlikeliness of that scenario was telegraphed by the move in government bond markets, which rallied aggressively since January as inflation expectations grew. 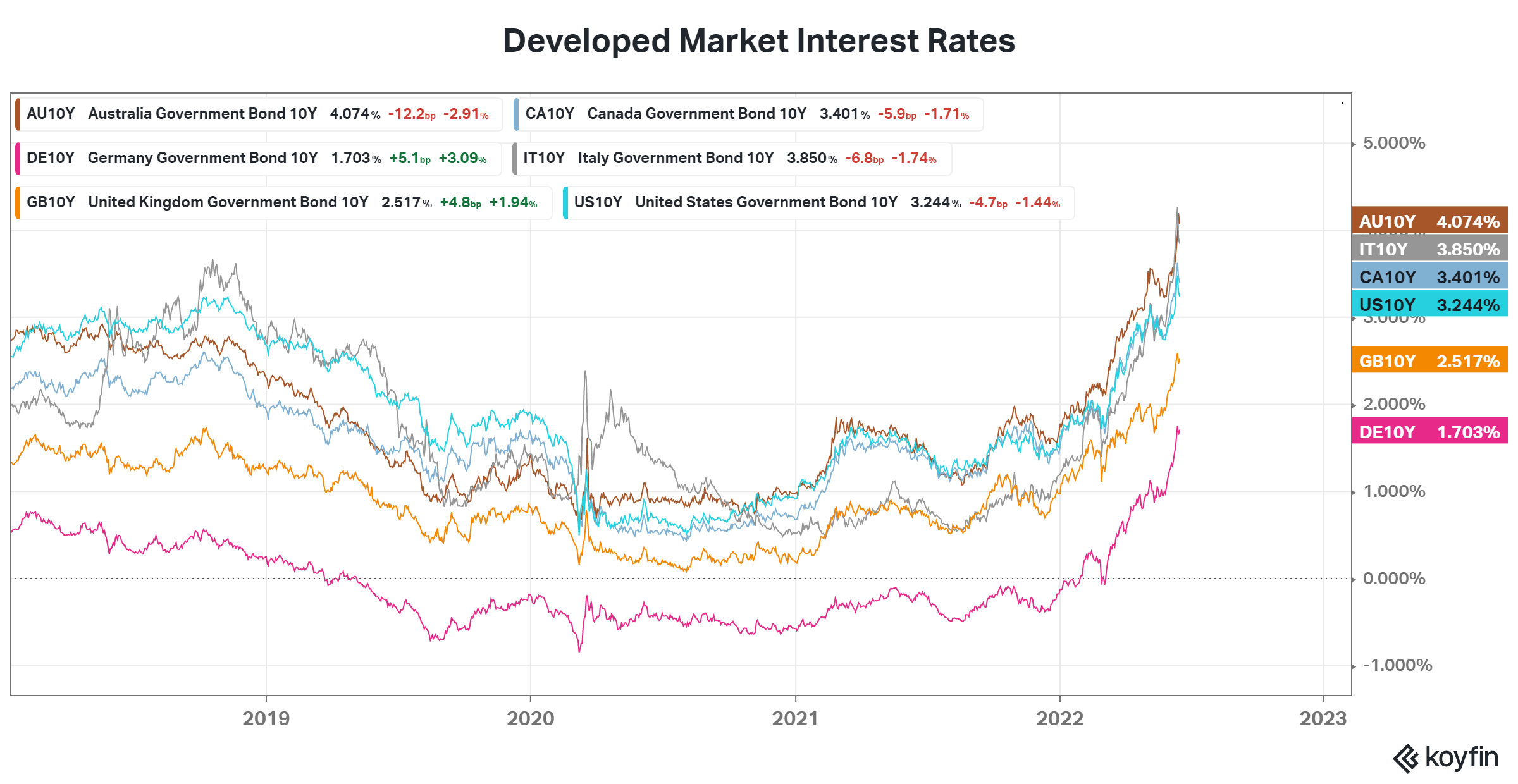 That preemptive tightening in the bond market highlights what we all know deep down but don’t want to admit.

And right now, many in the market are calling bullshit on the Fed and other central banks’ idea that inflation will come down without hurting the economy.

Whether or not the market is correct remains to be seen. However, softening economic data, record pessimism among consumers/business leaders, and big bets from hedge fund titans like Bridgewater are anticipating more pain ahead.

Who do you think is going to be right? Let us know your thoughts! 💭

P.S. we haven’t even talked about the Bank of Japan and the Japanese Government Bond market, but that needs a post of its own. For now, just know that speculators are playing chicken with the central bank, betting that it won’t be able to keep rates as low as they originally planned. 😬

As mentioned at the beginning of this Litepaper, this new and truly exciting nerd fest section is for all of you technical analysis chart junkies – my kind of people. We’re breaking this down into three categories.

Category one for beginners: Think of this category as ‘Your Baby’s First Book on Technical Analysis’ – it will include basic trendlines and moving averages.

It’s always good to check your analysis and forecasts. And for the love of God, if you don’t have a trade journal or an analysis journal, start one. Unless you’ve got a photographic memory, you’ll never remember half of the right or wrong trades/analyses you’ve done.

This Friday edition of Technically Speaking performs a back check on the most recent past analysis so you don’t have to.

Regulators Around The Globe Mixed With Crypto

From the viewpoint of governments and regulars, cryptocurrency is still generating a lot of mixed thoughts. For example, the Reserve Bank of India is reportedly seeking a broad ban on cryptocurrencies, citing that the asset class does not have any underlying value.

However, Australian central bank governor Phillip Lowe said, “I tend to think that the private solution is going to be better – if we can get the regulatory arrangements right – because the private sector is better than the central bank at innovating and designing features for these tokens, and there are also likely to be very significant costs for the central bank setting up a digital token system.”

The White House has made it known that tackling inflation is its top economic priority, as Americans feel the heat ahead of the midterm elections. 🗳️

The world’s largest crypto exchange, Binance, was hit with a double-whammy of bad news today. First, the exchange was accused of enabling money laundering on its platform — and second, the U.S. Securites and Exchange Commission announced an investigation into the platform’s $BNB token.

The first of these charges might be even more spicy than the toothy regulatory battle that might await the company. Reuters reported today that Binance processed at least $2.35 billion worth of transactions from hacks, investment frauds, and narcotics sales from 2017 to 2021. Among their charges were that the platform skimped on Know Your Customer (KYC) and Anti-Money Laundering (AML) checks.

US Lawmakers Spar over SEC’s activities

Politics suck, and we try and stay out of it. But this is the Litepaper, and it’s clearly biased towards crypto evangelism and advocacy. So, no matter your politics, if you’re opposed to crypto existing or want to regulate it to death, you suck. .

But there are some lawmakers out there who are clear defenders of cryptocurrency. I have no idea who Representative Tom Emmer of Minnesota’s 6th District is. But his recent takedown of the SEC’s Director of Enforcement, Gurbir Grewal, during a House subcommittee on financial services is pretty epic.