The firm operates in Hong Kong under Giraffe Capital Limited (“GCL”) but is listed in the U.S. under Magic Empire Global Ltd. ($MEGL), a British Virgin Islands-incorporated holding company.

Its prospectus filed with the SEC showed that it intended to offer 5,000,000 ordinary shares (25% of its total) for $4.00 per share. But, despite its low IPO price, the stock actually opened for trading at around $50 before rocketing higher to $250 on Monday. 🙃

Many have speculated that the stock’s run-up was due to coordinated buying from message board users, but nobody really knows what is happening here. 🤷‍♂️

Today was the stock’s third day of trading, and it fell 89.47% as traders saw their magical gains disappear as fast as they appeared. 📉 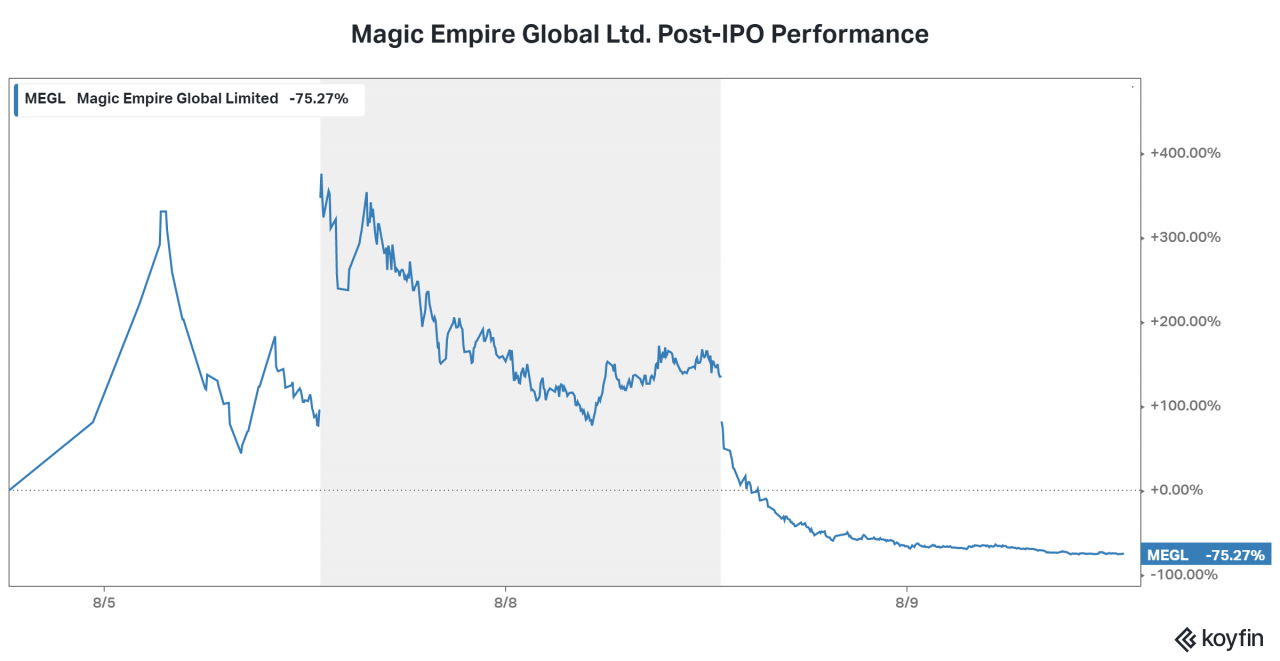 While it’s been a relatively quiet August for the major indexes, animal spirits remain alive and well in the markets. Bulls, bears, and pigs — the whole lot. 🐖

Stay safe out there y’all. 🧙‍♂️

The charts of two retail favorites were making the rounds today, so let’s talk about’em.

The first is Coinbase, whose shares hit new all-time lows of $40.61 before the close of trade today. While CEO Brian Armstrong assured investors the company does not have “any material exposure to FTX,” crypto contagion fears continue to pummel Coinbase and other crypto-related stocks. Besides the contagion fears, overall trading volumes remain dismal during crypto winter. As a result, investors fear the company’s coming financial performance will be worse-than-expected.

Let’s find out if they did. 🕵️

Several retail favorites were in the news today. Let’s find out why!

First up, Bed Bath & Beyond saw shares fall 5% after the company said it would issue 11.7 million shares to pay off some of its debt. The shares will satisfy about $123 million of the more than $1 billion+ in unsecured notes it has outstanding, with maturity dates in 2024, 2034, and 2044.

Holy Dow What A Month…

The Dow Jones Industrial Average may be the most boring and unloved of the major U.S. indexes. But in October, it gave people a lot to cheer about.

Below is a monthly line chart from the early 1900s, with a bar chart below showing the percentage gains and losses.

Okay, you probably will believe today’s China news. But that title was too good not to use, so let us have this one. 🤷

With unrest among China’s citizens continuing, there’s a lot to keep up with. 📰

Support and resistance are fundamental concepts in technical analysis, as is the idea of trend. In today’s post, we’ll look at several tech stocks catching traders’ eyes as they break support.

The first is Alphabet, which has a significant weighting in the broader market indexes. The stock found some buyers near 105 in May and has been treading water ever since. However, after failing to break out of the range in August, it’s now breaking to fresh lows.