As Elon Musk waits to close his deal to buy Twitter for $44 billion, the Tesla CEO just sold a whopping $8.5 billion worth of Tesla stock. 💰 💰

Musk sold 9.6 million shares of $TSLA stock, selling each share within the ranges of $822.68/share to $999.13/share. Analysts say the giant sale implies that Musk is trying to come up with more cash for the Twitter deal. Here’s a great graphic from the WSJ’s coverage of the story showing Elon’s financing for the $44 billion deal: 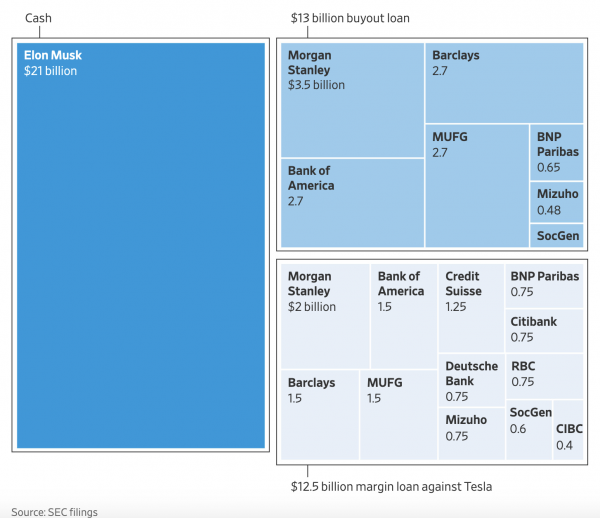 After selling the block of shares, Musk retains a 16% stake in Tesla. Yesterday, the world’s richest man tweeted that he didn’t plan on selling any more $TSLA stock: “No further TSLA sales planned after today.”

Wall Street continues to punish software stocks that don’t blow expectations out of the water. And today’s victim was CrowdStrike. 😱

The cybersecurity company reported Q3 adjusted earnings of $0.40 per share vs. the $0.31 expected. Revenues of $581 million also topped the $574 million expected. Additionally, its annual recurring revenue (ARR) of $2.34 billion rose 54% YoY, with $198 million in net new ARR added in Q3.

Amazon’s “Get Paid To Leave” Program

After laying off 10,000 corporate and technology employees earlier this week, Amazon is stepping up its efforts to reduce headcount further. ✂️

This time they’re using a “voluntary severance” program to incentivize employees to resign by November 29th. And if they change their mind, they’ll have until December 5th to withdraw their application. How about that for an awkward conversation?

A stock price falling nearly 60% over the last eighteen months left many investors wondering what could turn things around at the company. 🤔

Well, in a late-Sunday announcement, Disney informed the world that Bob Iger is back as Chief Executive Officer (CEO). Just eleven months after leaving, he’ll replace his hand-picked successor, Bob Chapek, who has faced much scrutiny over his company management.