Its CEO Barry McCarthy said in today’s memo, “We have to make our revenues stop shrinking and start growing again,” also stating, “Cash is oxygen. Oxygen is life.” 😮‍💨

The struggling at-home fitness company has seen its value plummet from a high near $50 billion just ~18 months ago to under $3 billion as of mid-July, which many would say warrants an aggressive strategy shift. 🔻

Another Unhealthy Quarter For Peloton

It’s been a big year of change for the company, and some investors seem to be coming around to its turnaround story. With today’s rally, the stock is at its highest level in about three months, though it still has a lot of work to do to get back to its post-IPO price and pandemic-fueled highs. 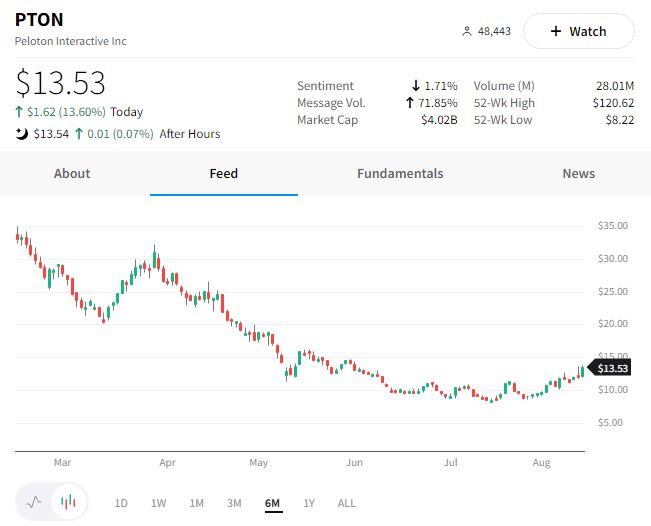 Maybe the primary driver of the stock’s gains is the rebound in the overall market or the tech sector. Or maybe it’s that investors are truly believers of the new strategy…only time will tell. ⌛

In the meantime, you can read the full memo here and hop on the $PTON stream to let us know your thoughts! 💭

CNBC has a good summary of the new iPhones, AirPods, and Apple Watches announced:

It’s 13F season, and market participants are rushing to see what the most prominent investors are buying and selling. 🐋

Today we’ll look at Berkshire Hathaway’s 13F to see what Buffett was up to in the second quarter.

Retailers faced a tough decision during the pandemic:

Grow market share by satisfying demand and risk potentially overordering; or
Underorder and lose a lot of potential customers because of empty shelves

As Elon Musk waits to close his deal to buy Twitter for $44 billion, the Tesla CEO just sold a whopping $8.5 billion worth of Tesla stock. 💰 💰

Musk sold 9.6 million shares of $TSLA stock, selling each share within the ranges of $822.68/share to $999.13/share. Analysts say the giant sale implies that Musk is trying to come up with more cash for the Twitter deal. Here’s a great graphic from the WSJ’s coverage of the story showing Elon’s financing for the $44 billion deal:

When a stock trends all morning and afternoon on StockTwits, oftentimes it’s either driven by great news or absolute carnage. 💀 Unfortunately for long-term $SNAP shareholders, on Tuesday it was most certainly an “absolute carnage” kind of day.

In what turned out to be the worst single-day price drop for Snap stock, the 40%-ish haircut seemingly had ripple effects throughout the broader stock market. 🔪 To get the full scoop on SNAP’s slashed guidance, feel free to take a gander at yesterday’s Daily Rip.

Intel Seals The Deal With Brookfield

The Asia-Pacific region is responsible for roughly 75% of all semiconductor manufacturing, which has left the U.S. and other western countries in a tough spot since the pandemic. 😓

As a result, the U.S. and other western countries have prioritized encouraging investment in semiconductor manufacturing, with measures such as the CHIPS for America ACT.