EU Delivers Another Blow To Meta

The market continues to pummelMeta ($META), with the most recent hit coming from the European Union (EU). Regulators in the EU, citing EU privacy laws, have allegedly ruled that users don’t have to agree to personalized ads based on their activity. 📝

A public ruling hasn’t been published yet, but the market is trading down based on its potential impact. That’s because analysts and investors fear the EU may create more roadblocks in Meta’s ability to use targeted ads, which are a key part of its business.

The new rules would only allow Meta to run advertising based on personal data with users’ explicit consent. Right now, it’s buried in the terms and conditions, making it difficult for users to opt out if they want to. And since user activity is a key metric used for targeting advertising, losing that data would weaken Meta’s advertising offering in the marketplace. 👎 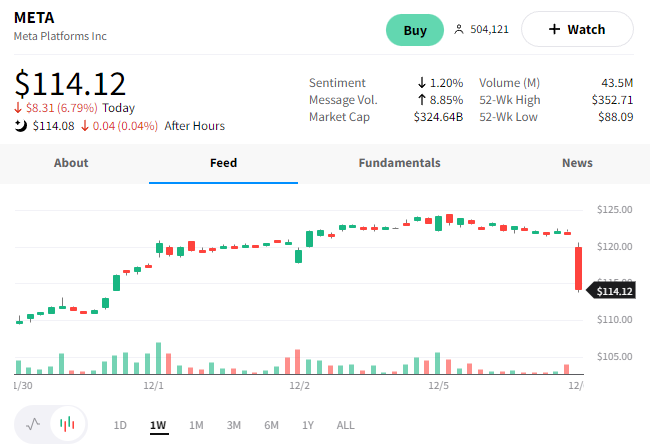 These are rumors for now, but given the EU’s recent track record against global tech giants…investors are rightfully concerned. 😨

Meta shares gapped down and trended lower throughout the day. They also took other tech companies who rely on advertising lower with them, including Google, Snap, and Pinterest. 📉

One Pops & Another Flops

The Bed Bath & Beyond saga continues this week as prices rally 28% despite its earnings miss.

Officials Weigh In On The Economy

Federal Reserve Chairman Jerome Powell delivered a speech to Sweden’s Riksbank on Tuesday, emphasizing the need to be free of political influence. 💬

He’s been consistent in his messaging that the Fed needs to tackle high inflation. However, he reiterated in today’s message that achieving the central bank’s goal will require “tough decisions” that are likely to be politically unpopular.

It’s another big day in tech earnings, so let’s just jump into it.

As Disney looks to court investors back to the “Happiest Place On Earth,” it’s facing a new challenge — activist investor Nelson Peltz. 🫢

Trian Fund Management is Peltz’s activist investor firm, founded in 2005. The firm’s website describes itself as “a highly engaged shareholder, bringing a private equity mindset to the public markets.” And this isn’t its first time butting heads with Disney’s management.

Argentina isn’t the only team that’s scored big lately. $MDGL pulled off a hat trick by more than tripling in pre-market and continuing to drive higher throughout the day. 🚀

Man U Have Got To See This

The soccer franchise saw its shares rise 60% this week on news that its owners are exploring a sale. And they expected a “bidding war” to take place. It was also in the news because Cristiano Ronaldo and the club mutually agreed that the superstar would leave the club “with immediate effect.”