Crypto: The Next Mr. Worldwide?

Happy Friday everyone, what a week we witnessed. Props to those of you that survived. 👏

The market finished with a thud. ⛈️ The S&P 500 closed lower all four days of the shortened week. 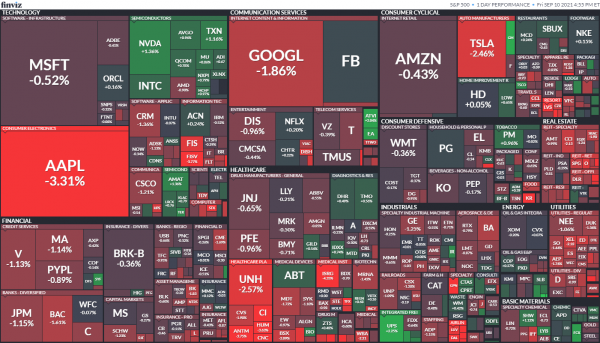 All sectors closed in negative territory. 💔 Materials held up the best, falling just 0.02%.

A Big L for Big Tech

Apple failed to halt the march of progress today. A judge forced the company to allow alternative payment options for in-app purchases, marking the conclusion of an epic brawl between app developers and Big Tech. 🥊

The lawsuit brought against Apple by Epic Games, the creator of Fortnite, will put new restrictions on Apple’s App Store rules. ✋ 🛑 However, it wasn’t a slam dunk for Epic, either. The court ruled that Epic was “in breach of its contract with Apple when it implemented [an] alternative payment system” for Fortnite microtransactions. Epic will have to pay $AAPL its commission on the revenue it collected through its third-party payment system.

Last week, South Korea was the first country to pass a bill limiting Apple and Google’s control over their app store. The legislation opened the floodgates for developers to use their own payment methods — rules which would have likely resulted in limits to Big Tech’s app store power in other countries. However, with the U.S. court ruling today, the companies are likely to roll out new policy internationally (to match the new expectations in the U.S.)

With today’s ruling, it’s likely that both Apple and Google will lose billions in revenue from the loss of hefty app store commissions. 💸 Those commissions will probably be picked up by other digital payment processors like Stripe and Square.

Are you ready for some football? To celebrate the return of football season, new customers can play FREE for a $1 million top prize when making a first-time deposit, thanks to our partnership with DraftKings. Act quickly, this offer won’t last forever! T&Cs apply.

The producer price index (PPI) rose 0.7% month-over-month. That’s higher than the 0.6% analysts expected. The PPI is now up 8.3% YoY, which means producers are now charging over 8% more for producing goods such as food and energy commodities, including natural gas. Some of the other big risers included industrial chemicals and motor vehicles. 💰

These higher prices might be good news for producers, but they’re most likely bad news for the rest of the economy. 👎 The PPI generally acts as a “sign of the way that things will be going” for its BFF, the CPI. The CPI, or consumer price index, is the index that measures inflation for consumers. Basically, that means when producers charge more, those higher costs tend to get passed down to consumers.

With all the inflation buzz, the PPI’s sustained highs might worry the Federal Reserve. The Fed has been weighing tapering bond purchases, allowing interest rates to start heading north. The U.S. 10-year bond was up 3.2% today to 1.344%.

Too cool for school, amiright? 😎

No, but really. Edtech is on a roll this year. Quizlet just announced plans for an IPO — a year ago, the flashcard/AI/tutoring platform was valued at $1 billion. The company doesn’t do much bragging, but rumor has it that Quizlet has been growing its revenue 100% each year.

Quizlet’s IPO will join the slew of other publicly-listed edtech companies in 2021, including Duolingo, PowerSchool, Instructure, and more. Due to the pandemic, students relied on online resources to learn. 🖥️ 🤓

Renaissance Capital senior strategist Matt Kennedy commented on the edtech boom: “Many of these companies enjoyed extraordinary growth in 2020 and now they’re looking to raise money based off those grade A results to fuel growth.”

Duolingo went public in July and raised $521 million from its listing. According to Crunchbase, VC-backed edtech companies raised over $9.5 billion this year and $12.4 billion last year.

Quizlet’s recent ‘explanations’ feature provides step-by-step explanations on problems across textbooks of all subjects and levels. Through the product’s launch, Quizlet intends to “to help students better understand the reasoning and thought process behind study questions so they can practice and apply their learnings on their own.” Hmm, sounds better than some teachers we’ve had, tbh.

Maybe the future of school is… no school? 🤔

Inspired by El Salvador, a queue of countries are now forging ahead with crypto legalization. ✨

First is Ukraine, which recently adopted a bill legalizing and regulating all virtual financial assets, including cryptocurrency.

Cryptocurrencies in Ukraine have long been in a gray area. It was neither legal nor forbidden, due to a lack of laws and regulations. The new law passed on Wednesday does not make Bitcoin or any other cryptocurrency legal tender, but it does allow the country to regulate digital currency.

The new legislation also spells out certain protections against fraud for those who own Bitcoin and other cryptocurrencies. The country even plans to open the cryptocurrency market to businesses and investors by 2022, as per Kyiv Post.

Panama could be the next country to regulate crypto. The day after El Salvador adopted Bitcoin, Panama’s Congress introduced a bill proposing to use Bitcoin and Ethereum as currency. The bill also explained why crypto adoption would be beneficial for the country. Panamanian Congressman Gabriel Silva, who introduced the bill in a tweet, said the bill had the potential to create jobs, attract investment, and foster greater government transparency.

Cuba and Paraguay are both also working on bills in their respective countries to legalize digital assets. 💰 💰

It underscores that crypto is clearly not just an economic issue, but a political one as well. As more global governments start acknowledging the power of cryptocurrencies, who knows where crypto will go. 📈 🚀

🔋 Global Windfarm Installations Expected to Surge After Covid Drop, According to Report

📊 What Happens to a Stock’s Price After Earnings? It Doesn’t Usually Matter.