Polygon ($MATIC.X) has a bullish and bearish setup in Point and Figure. For bulls, the setup is based on a Point & Figure pattern known as an Ascending Triple Top. Bulls are likely eyeing an entry at $0.79, with a standard four-box stop at $0.75 and a profit target just shy of $1.00 and slightly above the prior swing high at $0.97.

Bears are likely looking at short entries with a confirmed break below a quadruple bottom at $0.72. Note the image’s volume profile on the left side – it is extremely thin, between $0.74 and $0.61. Slim volume profiles act like a vacuum and suck price action through it to the next high volume node, which doesn’t appear until the $0.60 – $0.61 value area – a likely target for shorts.

This one will be short and sweet. Just like Polygon’s ($MATIC.X) chart, there is an Ascending Triple Top breakout setup on Ethereum’s ($ETH.X) Point & Figure chart. Bullish analysts and traders are waiting for an entry at $1,400 with an upside potential near the $1,725 value area.

Ethereum and the rest of the market remain at the mercy of Bitcoin, and until there is a major change in direction, ETH will likely continue to trade flat and possibly even lower.

Dogecoin’s ($DOGE.X) Point & Figure chart shows a Pole Pattern continues to play out. Bulls are looking for a reversal column of Xs to form as an entry point – which would occur at $0.063, but that is likely to change depending on when you read this Litepaper! The very upper range is at the $0.078 value area, but there are some significant resistance zones in the $0.072 value area that will likely prove to be a difficult zone to stay above.

However, bears will likely remain in control until the broader market makes a clear case of a new and sustainable bull market.

Out of the top 25 cryptocurrencies by market cap, Monero ($XMR.X) is perhaps most at risk of regulatory pressure. Why? Because Monero is a privacy coin – it’s the Bitcoin ($BTC.X) of privacy coins. Monero’s primary purpose is to maintain anonymity.

Do you know who really doesn’t like that? The IRS. They’ve had a bounty of $625,000 to anyone that can crack Monero’s transactions. So, while the fundamentals are certainly worrisome in the long run for Monero’s continued operation (at least in the US), the current technicals point to a probable bullish breakout soon. 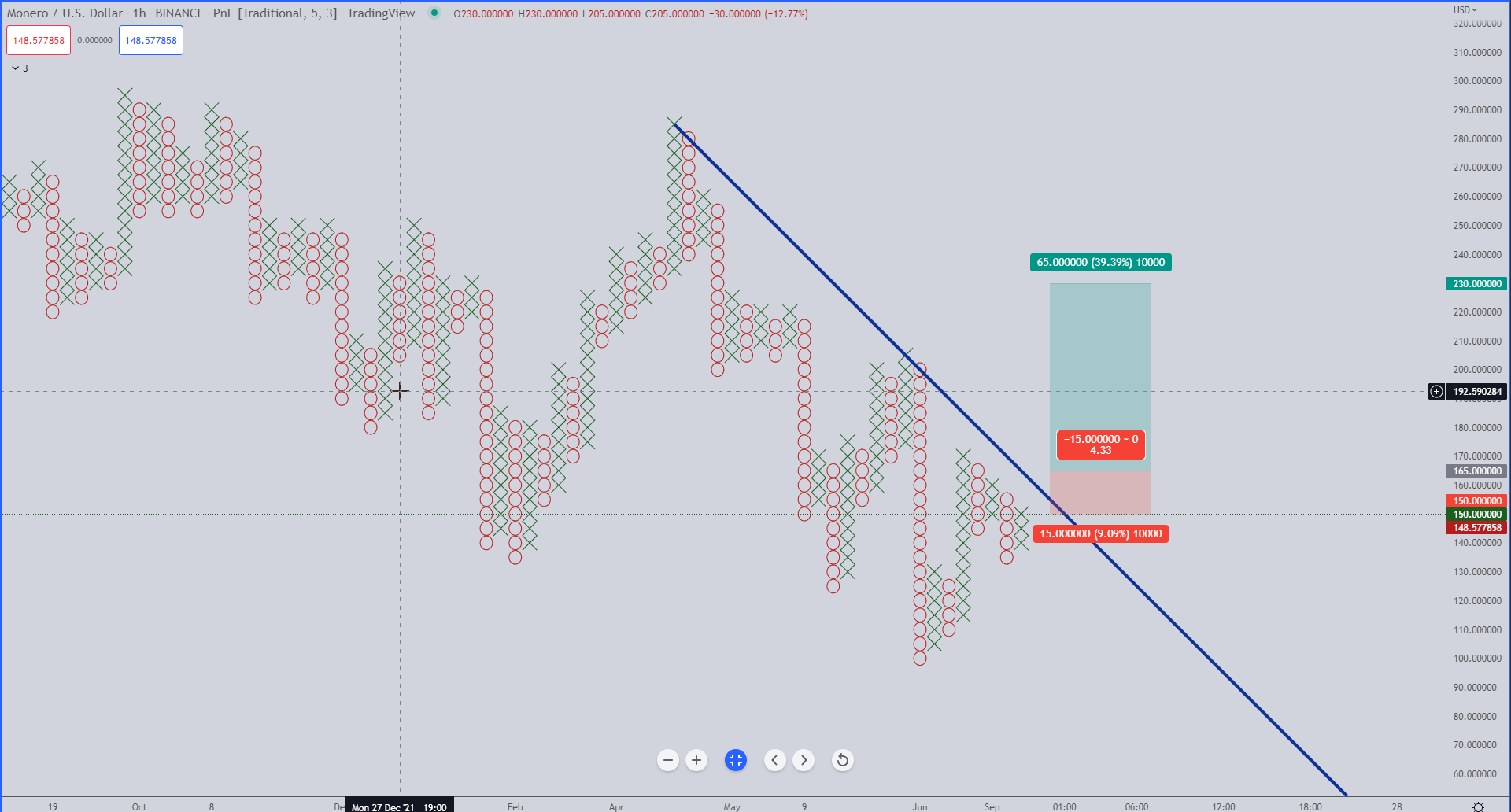 The blue diagonal line on Monero’s Point & Figure chart is the dominant trend angle – which is bearish. However, if Monero continues to move higher and develops a double top at $160, then bullish traders and analysts are likely looking for an entry at $165. $165 would simultaneously cause a breakout above the dominant trend line and a double-top.

We’ll keep this short and sweet because it’s more of an update to the charts in the November 9 Technically Speaking article.

On Wednesday, analysts were observing the failed test of the breakout above the triangle on Bitcoin’s chart. Analysts are now looking at an area near yesterday’s high near the $18,00 value area.