Check out this wild chart courtesy of the WSJ: Sectors also exhibited the V-shaped recovery, with many SPDR-series ETFs bouncing off its lows and closing in the green. Consumer discretionary, energy, and industrials saw the biggest gains. 🍀

Kohl’s climbed 36% after the chain announced that it’s considering M&A deals from a couple of firms. Read more below.

Tensions mounting between Ukraine and Russia fueled today’s market madness. 8,500 U.S. troops have been put on “heightened alert” for deployment to Ukraine’s border. Read more on this conflict below.

If you think the Federal Reserve’s pending rate hike is a force to be reckoned with, just wait until you hear about the conflict baking on the other side of the Earth. 🌍 🚨

While financial media and mainstream outlets have been pitching their narratives about incivility in the U.S., a conflict is growing in Ukraine. Just over the border of the former Soviet state, Russia is reportedly amassing an army to invade the country. Such an invasion would have radical implications on geopolitics, potentially starting a war.

The word “potentially” deserves elaboration here. Russia’s President Putin claims that Russia is not going to invade Ukraine, but Putin has nonetheless amassed the troops, ships, tanks, and resources necessary to do so. That’s no small feat as it requires moving a lot of resources over thousands of miles… given Russia’s tenuous relationship with honesty (and the West), it’s hard to say that the world is put at ease by the country’s claims that this movement has to do with “a military exercise.”  🤔

Most of our readers are American, so naturally people are asking— why does this matter to Americans? Why does Russia want Ukraine? Anyone can speculate what Russia wants with the country. Maybe Russia’s Putin, a former KGB agent, wants to relive the glory days of the USSR?

Ultimately, there are four real problems that stem from a Russian invasion of Ukraine.

This geopolitical situation is not some far-out fantasy anymore. Biden has been unclear about how much the U.S. would contribute to a prospective conflict, but the President has mentioned sanctions (which could be very bad for markets, including Russia’s markets.) Today, Russia’s markets are in free-fall. Jake Cordell from the Moscow Times reported that the Russian stock market was down 9% earlier today. The country’s currency, the Russian Ruble, also fell 1.5%.

Only time will tell what the future holds, but with Ukranians grappling with the prospect of invasion, NATO putting troops on alert, and the U.S. possibly preparing to mobilize troops, it’s getting real. Continued conflict is not inevitable, but it is very possible.

As always, we’ll keep you updated on this event and its global ramifications. 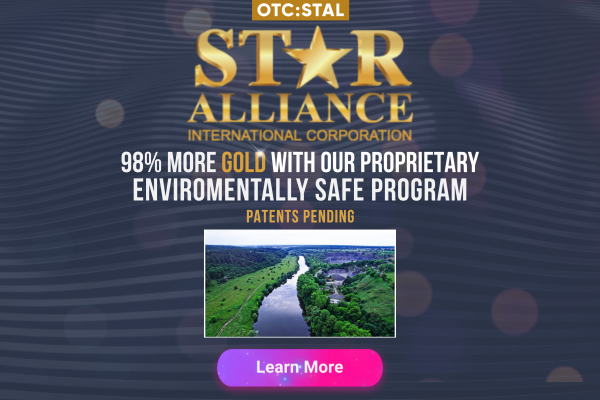 With its environmentally friendly new extraction technology, Star Alliance (OTC Markets: STAL) is reviving historic gold mines at up to 98% efficiency, giving once abandoned mines a new and profitable lease on life.

If you looked at your portfolio today, chances are you had a mild (or severe) heart attack, followed by… a sigh of relief?? 🤔 Today’s mid-day selloff was saved by bold dip-buyers who pushed stocks back into the green. Yeah, WTF.

The S&P 500 plunged as much as 4% intraday, down 10% from its recent high. The S&P 500 approached (gulp) the dreaded correction territory, then closed +0.28% at the end of the day — retail, energy, and industrials successfully reached green territory. 🍀 The Nasdaq plummeted about 4% during the day, earning +0.6% at close and the Dow scrambled +0.29% . What just happened.

According to some analysts, 2022 is looking more like the year of correction and less like the year of the dip. Michael Mullaney, an analyst at Boston Partners, commented on today’s mayhem: “The buy-the-dip mentality has left the market at this juncture. If you’ve tried to buy this dip, you’ve gotten toasted.”

Another market strategist, Victoria Fernandez of Crossmark Global Investments, shared “Look at this oversold condition that we’re in, and the longer-term upward trend that the market is still in, and combine that with the fact that credit spreads are so well behaved right now. There’s still some support for the equity markets, there’s just going to be quite a bit of volatility.”

Meanwhile, investors are anxiously awaiting news about the Fed’s plans to battle inflation during the Federal Reserve meeting scheduled this week. Tensions between Ukraine and Russia also fueled panic in the markets. But at the end of the day, only time will tell where we go from here — and may the odds be ever in your favor. 🎲 🙏 😳

Kohl’s is a brand known for serving deals, but one investment company wants to serve its own deal to the retail giant. Kohl’s shares ripped 36% today after the company confirmed that the private equity firm Sycamore Partners offered the chain a deal. 🔥 🔥

A couple of days ago, another firm called Acacia Research (which is backed by Starboard Value LP) offered to buy Kohl’s for $9 billion. Kohl’s has announced that the company is considering both of its offers.

So what’s with the M&A/Kohl’s news? About a week ago, the hedge fund Macellum Advisors warned Kohl’s to increase its stock price, improve its business, or consider a potential sale. Otherwise, the hedge fund — which is a Kohl’s stakeholder — said it would appoint its own board members to address the struggling chain.

New Japanese IPO tanks days after going public. After going public last Tuesday, Tokyo-based health & beauty company Yoshitsu collapsed in trading today. The company priced its IPO at $4, but saw the price explode to $32 by the end of its first day of trading. Today, it lost more than 85% of its value — coming back to Earth and closing the day out at $4.69. Check out the $TKLF stream on Stocktwits.

NFT marketplace OpenSea exploited for $1 million. Users on OpenSea got played by a bug with the leading NFT marketplace which prompted sales of their expensive digital collectables at bottom-barrel prices. Read more about it in Stocktwits’ crypto newsletter, The Litepaper.

Mark Cuban finally launches long-awaited online pharmacy. Mark Cuban’s cost-plus drug company is here… and it’s called The Mark Cuban Cost Plus Drug Company. The company, which only accepts cash and uses Truepill to fill and deliver prescriptions, is a retailer aiming to disrupt the healthcare biz by cutting out middlemen such as pharmacy benefit managers (by being both at once.) Read more about the venture and its implications in Axios.

IBM reports strong results for Q4. IBM shared positive results from its earnings report afterhours today, pointing to a continued turnaround in the company’s business. The company’s revenues grew 6.5% YoY. Here’s Barron’s with a summary of the earnings.