SPACs Are Getting SMACKED

Hi there, everyone! Welcome back to the Grande Casino. 🎲

We’ve got a whole newsie for you today, and this one has everything: SPAC drama, Wall Street drama, crypto drama, and political drama. Basically, all the flavors of drama you could possible want. 😋 You can’t go wrong with today’s top stories, so let’s get into it…

Intel made headlines after hours after the WSJ reported that the semi company was close to a deal with Tower Semiconductor. They’re reportedly paying a “hefty premium” for the company – nearly $6 billion. Based on Intel’s recent buyout attempts, our take is that they REALLY wanna buy somebody. 😂😂

In crypto-related news, Bitcoin is up +1.1% and Ethereum is up +2% after trading to the downside earlier today. They’re still down on the week, but the cryptos are regaining some ground despite the macroeconomic and geopolitical turbulence we’ve seen over the last few weeks.

The SPACs Come Crashing Down

Once the golden child of Wall Street and retail alike, SPAC mergers are now falling in two ways — falling apart and falling down. 👎

Let’s dig into the “falling apart” part. A Bloomberg article published today claims that SPAC mergers are “falling apart at a rapid pace.” That’s literally the headline. The article then claims that 22 deals have been spiked since the middle of 2021, which compares to 26 called off in the five years prior. 😬

The article suggests that many deals have fallen apart because of redemptions — which stem mostly from disinterest in deals. In recent weeks, we’ve seen this first-hand as Binance picked up the tab for a $200 million investment in Forbes. The tab was run up by committed capital from large money managers, which then decommitted and offered some cap space for an enterprising new investor. However, Bloomberg also mentions some other companies by name — Acorns, Reservations.com, and Pioneer, to be specific.

SPAC mergers aren’t just falling apart — they’re falling down. The Defiance Next Gen SPAC Derived ETF, or $SPAK for short, tracks some 373 holdings. It’s a mix of SPACs seeking a merger, SPACs which have issued Definitive Agreements (DAs), and SPACs which have merged. Among the top holdings are stocks such as Lucid, Grab, Pershing Square Tontine Holdings, and DraftKings.

One crucial takeaway from the $SPAK ETF is that money is drying up in the once star-studded space. $SPAK is down 48.8% in the last year, which is an even worse than the return posted by its IPO-tracking cousin, the Renaissance IPO ETF. $IPO is down 39.4% YoY. 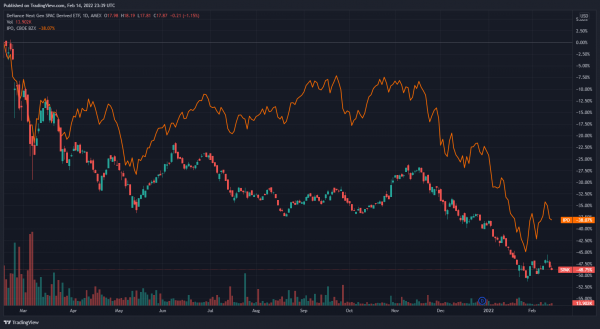 So, what’s the takeaway? Everybody is getting hammered by newfound macroeconomic and geopolitical tension 🥊 — but perhaps no more than the market’s newest entries. All those pandemic-era IPOs and SPACs, which turned into hot momentum trades, are not faring so well in this cold market. 🥶

Based on how things are looking, there might be a lot more downside still to come… or maybe this downward trend will invert and all the new names will go to the moon?! That’d be great, right? 😂 Jokes aside, nobody knows what comes next… or maybe you think you do. Tell us what you think lies ahead in the $IPO and $SPAK streams!!

FINAL WEEK to Invest in the Company Reimagining a $19.6B Industry

The firm paid $100 million – $50 million to the SEC and $50 million to 32 states –  to settle legal accusations relating to its BlockFi Interest Account (BIA). It marks the largest penalty against a crypto firm ever, which also acts as a firm warning for other crypto lenders.

BlockFi violated three sections of federal securities laws – including selling unregistered securities, carrying on business as an unregistered investment company, and making misleading statements on its website that its loans were backed appropriately. BlockFi denied the allegations but ultimately was found guilty. ⚖️

“Today’s settlement makes clear that crypto markets must comply with time-tested securities laws, such as the Securities Act of 1933 and the Investment Company Act of 1940. It further demonstrates the Commission’s willingness to work with crypto platforms to determine how they can come into compliance with those laws,” he added.

The New Jersey-based crypto player has agreed to stop offering lending products and plans to register its high-yield interest accounts. However, the conclusion of this chapter of drama spells the start of newfound drama for BlockFi’s competitors – which stand to face scrutiny over their own lending products.

You can read more about BlockFi’s struggle, and what it means for other crypto companies, in today’s edition of The Litepaper.

Facebook’s facial recognition technology is no longer being used by the platform, but the Lone Star State certainly doesn’t care about that — Texas Attorney General Ken Paxton is pursuing hundreds of billions of dollars in civil penalties ($25,000 for each of the 20 million+ Facebook users in Texas, ouch) for the platform’s technology. Paxton commented:

“Facebook has been secretly harvesting Texans’ most personal information—photos and videos—for its own corporate profit. Texas law has prohibited such harvesting without informed consent for over 20 years. While ordinary Texans have been using Facebook to innocently share photos of loved ones with friends and family, we now know that Facebook has been brazenly ignoring Texas law for the last decade.” Someone’s not happy…

According to Texas’ allegations, Facebook’s facial-recognition technology stored data about users’ facial geometries, which are considered to be highly-sensitive biometric identifiers by the state’s law. Texas alleges that the platform stored and profited from biometric identifiers without user consent, even though Facebook has already discontinued the controversial technology. 🧬

This isn’t the first time Facebook is in legal drama over its biometric data — a class-action lawsuit filed in Illinois required the platform to fork over $650 million in penalties for similar allegations.

Meta responded that Texas’ allegations “are without merit and we will defend ourselves vigorously.” $FB fell just 0.84% today, but the stock is down 37.4% over the last three months and it’s down 35.3% YTD.

Unless you’re engaged with politics, you are an ardent Democrat, or you’re a resident of the state of West Virginia, the name Joe Manchin is unlikely to elicit a reaction. In fact, the name might not register at all. 🤷 However, for the unacquainted — Manchin is perhaps the most disliked Democrat in the Senate.

He collects anger from the political right and from many members of his own party. Manchin has become a hot-topic in political spheres because of his opposition to the Biden Administration’s progressive agenda — namely Biden’s flagship political treatise, Build Back Better.

Moderate Democrats (like Biden) dislike him — but Progressive Democrats (think AOC and Bernie) hate him. And you can bet your bottom dollar that if Democrats lose ground in November (fair to moderate odds as of this writing), many will be clamoring to fault Manchin for the loss.

However, Manchin’s latest war cry is a surprising ask — he reportedly wants Democrats to revisit tax-rate hikes in order to arrest the country’s inflation and debt problems. If he gets what he wants, it might even put pressure on the Democrats’ final voice… controversial moderate Democrat, Kyrsten Sinema (D-AZ), who has resisted rolling back GOP tax cuts.

Manchin laid out his asks for the tax-and-spending bill in December 2021, saying that he wanted a “slimmer bill” that “overhauls the U.S. tax code to make it fairer … [and lowers] the cost of a broader array of prescription drugs than the current bill.”

Ultimately, Manchin’s support increases the likelihood that Biden’s agenda (albeit, boiled down) will see the light of day again. In the case Manchin can somehow muster some support out of Sinema, then we could see higher taxes coming for corporations and rich Americans as early as tax year 2023. 📈

Regulators investigate block trading at Wall Street banks. The Wall Street Journal is reporting that federal investigators are looking into block trading at major banks such as Morgan Stanley and Goldman Sachs. According to the report, the investment banks might have tipped off firms ahead of planned sales. That sounds… illegal. Guess we’ll see where it goes, right? Read more in the WSJ.

Sarah Palin’s defamation suit gets tossed. It’s not easy to sue somebody for defamation — just ask Sarah Palin, who found out the hard way today. A Judge dismissed the former Alaskan governor’s libel case against The New York Times, saying that her lawyers “failed to produce enough evidence that the newspaper knew what it wrote about her in a 2017 editorial was false or defamatory.” Those are two critical ingredients necessary for a defamation suit — you have to prove that somebody was not just wrong, but knowingly shared falsehoods to do harm. Palin’s lawyers failed to do that, but say they will appeal. Read more in Yahoo News.

UK authorities seize NFTs in fraud probe. We’re not sure if this has happened before. UK authorities at the HRMC seized $6,692 worth of crypto assets and three “yet-to-be-valued NFT artworks” according to Fortune. HMRC claimed that three suspects were charged in the fraud, which involved use of 250 fake companies, fake addresses, and prepaid phones in an effort to obfuscate their identities. Pretty wild, to be honest. Read more in Fortune.

Ukraine’s woes grow. Yeah, yeah, yeah… we know it’s all Ukraine, Ukraine, Ukraine. Feels like there’s no breaks these days, everything is coming so fast. Anyway, Ukraine’s woes are growing… the U.S. is reportedly moving its Ukrainian embassy out of Kyiv, Russia is reportedly mobilizing, and Western media outlets are pedaling the war narrative (maybe for ratings, maybe because it’s real, or maybe because of caution). We’re not going to link to a source because “everything is propaganda”, but word for the wise — if Russia does invade Ukraine, it will be very bad for everybody (including all you aspirational early retirees and serial investors.)

⛸️ Why is Kamila Valieva, the Russian Skater at the Center of an Olympic Doping Case, Allowed to Compete?

💣 The Top Secret Plan to Explode a Nuclear Bomb in Yorkshire

🧠 A Guy Made An Algorithm to Play Wordle Best, But Made a Small Mistake.

🏀 March Madness is a Month Away. Who Are The Top Contenders?

Roblox is learning that investors don’t play games regarding earnings. 🎮

$RBLX shares are down close to 17% after its earnings and revenue numbers were below expectations. The company also reported 52.2 million average daily active users, nearly one million under expectations. Additionally, average bookings per daily user were down 21% YoY to $12.25. 📉