The Terra news never seems to stop. Today is no exception: holders of the chain’s token, $LUNA.X, voted to reconstitute the chain after the community’s controversial “Rebirth Terra Network” proposal.

It passed with 65.5% of the vote in favor. The remainder was spread largely across Abstain and No with veto. Check it out: 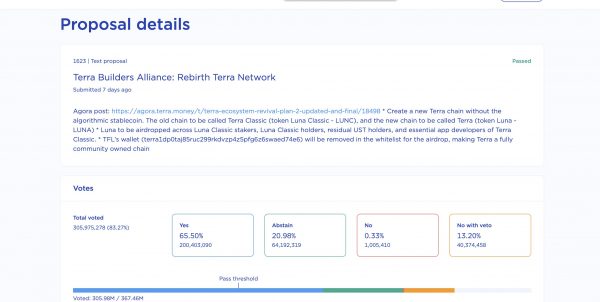 The new Terra chain, Terra 2.0, is expected to launch in two days. On the news, the TerraUSD (of all things) went higher to the tune of +39%. However, TerraUSD and the original Terra gas token will probably be unusable in the next 48 hours… so that’s interesting.

Aside from that, the broader market was mostly unaffected today. Bitcoin was down 27 bips, Ethereum was down -1.17%. Most of the other large-cap coins followed their suit.

The sole gainer in the top-10 coins was Tron, which recently became the chain with the third-largest Total Value Locked (TVL). The coin traded up +5.4% today, bringing it to a +20% gain on the week. It can credit its newfound growth to the launch of its Terra-esque USDD stablecoin.

The chain’s TVL, a measure of the money which is stewing in decentralized applications, rose +35% this week to $5.87 billion according to DeFi Llama. It’s up +41% this month.

That said, we’ve got a fun edition for you today… here’s what’s on deck:

🇹🇷 Regulation is finally arriving in Turkey after two exchanges collapse; the Lira continues to fall

Speaking of which, Tron topped Avalanche today to move into #9 on the crypto top-10 list. Here’s the rest of the action from today:

Former WeWork co-founder and CEO Adam Neumann is back.

The controversial CEO is now the founder of a carbon credit startup called Flowcarbon, in which he is also an investor. The new company raised a $70 million Series A from high-profile VCs such as Andreesen Horowitz (a16z), General Catalyst, and Samsung Next.

Flowcarbon is a blockchain-based company intermediating in the voluntary carbon markets. The company will issue a carbon-backed token called the Goddess Nature Token (GNT), which is “backed by a bundle of certified credits issued over the last five years from nature-based projects.” Its goal is to offer exposure to “corporate-quality credits.” Investors can either buy GNT to retire the credit, use it in DeFi applications, or “redeem” it for an underlying real-world credit. Alternatively, they could hold onto GNT as an investment.

The medium of “carbon credit investing” has been on the rise in recent months as the demand for voluntary carbon markets heat up. Carbon markets are a lesser-known, opaque marketplace where corporates purchase credits from non-profit or non-governmental organizations which are removing carbon from the atmosphere. A single credit is issued each year to the organization representing projects which avert the creation of one metric ton of carbon.

However, there are only so many projects being accredited for their carbon-removing activities. When investors participate in the market by buying these credits, either to retire them or speculate on them, they reduce the supply of them — and that leads to more expensive acquisition costs on the credits for corporations.

On the blockchain, crypto investors have been getting a piece of the action for over a year already — KlimaDAO, Toucan, Universal Carbon (UPCO2), and other carbon credit-based DAOs and protocols have tokenized carbon credits and developed new technology to allow for bridging carbon credits onto the blockchain. We’ll touch on their impacts on-chain in a future edition of The Litepaper.

Carbon credits might not be without their pitfalls, though. There are many issuers of credits, many different styles of credits, little regulation, and very little transparency in the marketplace. They have also been assailed as assigning a profit-motive to resolving climate change, and been described as a license to pollute by left-leaning opponents.

These pitfalls might be best explained by The Nature Conservatory‘s decision to investigate the authenticity of 20 projects which they sold carbon credits for. There have been no additional updates about their investigation, but the organization is known to sell credits to JPMorgan, Disney, and Delta, among others.

The world’s largest carbon issuer might have its own problems, too: it announced today that it would “prohibit the practice of creating instruments or tokens based on retired credits, on the basis that the act of retirement is widely understood to refer to the consumption of the credit’s environmental benefit.” This act is likely to affect existing blockchain-based carbon protocols.

However, it’s unlikely to do much to Neumann and his friends at Flowcarbon. After all, the way their press release reads, they’re going long on carbon as an investment vehicle — and building infrastructure which could realign the balance of power in carbon markets on-chain.

He also indicated, in the same interview, that he began “buying forests near the equator” and that he bought forestland which was “more than a few times the size of New Jersey.”

Obviously, WeWork made Neumann very wealthy. However, WeWork can’t say about Neumann. The ambitious Softbank-backed startup once towered at a $47 billion valuation. Today, it’s worth less than $5 billion.

VC goliath Andreessen Horowitz (a16z) announced its fourth, and largest, crypto fund today — they hope to capitalize on discounts in the marketplace as the “golden era of web3” ramps up.

a16z’s newest crypto fund is more than double the size of its last one, which it raised last June. At $4.5 billion, it will be not just a16z’s biggest crypto fund, but the biggest one that the world of web3/blockchain/crypto has ever seen. It will take the crown from the Paradigm One Fund, which announced it pooled a total of $2.5 billion in November 2021.

Their criteria for investing? Well, quite broad. It’s everything under the crypto sun:

In tandem with their beefy checks, a16z also claims it provides operational resources to protocols and businesses it invests in. That broadly includes engineering, security, talent, regulatory, and marketing resources.

The firm’s latest fundraise comes at a trying time for the broader crypto market, which took a trillion dollar haircut after the collapse of the Terra blockchain and its troubled stablecoin, TerraUSD. However, a16z’s new fund shows that Terra and TerraUSD didn’t kill crypto — it simply offered a new, more desirable, entry point for the wealthy’s billions of dollars.

Turkey’s leading party, the AK Party, is expected to propose bills in parliament in the coming weeks that will regulate crypto in the country. The move comes after months of sky-high inflation and currency debasement, as well as the collapse of several crypto exchanges in the Eastern European country.

Central to the alleged legislation are capital requirements for local exchanges. Anonymous officials cited by Bloomberg claim that crypto exchanges which want to operate in Turkey would have to have USD$6 million in capital. The country is also expected to weigh methods to secure crypto holdings, presumably within existing banking infrastructure.

The rumored legislation will also mean new taxes for Turkish citizens buying cryptocurrencies, likely at the point of purchase.

Turkey’s move to regulate the country might be a direct result of the collapse of two crypto exchanges last year — the exchanges Thodex and Vebitcoin collapsed, resulting in billions worth of losses for holders. Thodex’s CEO, as well as members of the exchange’s team, disappeared after halting trading last April. Days later, Vebitcoin halted its trading after “citing deteriorating financial conditions.” They both represented close to a billion dollars worth of volume at the time of their collapse.

However, the weakening of the Turkish Lira could be another indirect reason for the regulation. The Lira is down more than 45% against the U.S. Dollar YoY, in-part because of the country’s president setting out on a campaign of economic independence. His campaign has caused Lira inflation to hit 70% in April. The country’s leadership, in spite of this inflation, has maintained a low interest-rate policy and aligned themselves with “de-dollarization policies”, which have been largely unpopular among investors.

If there’s one catalyst that early cryptocurrency adopters have been waiting for, it’s a clear sign that traditional and institutional money throws their moola into the crypto space.

When you take things one day, one week, or one month at a time, it is hard to forget that there has already been many traditional big money players in the space. But none so big as this behemoth:

Six Flags Entertainment investors were not entertained by the company’s lower-than-expected earnings and revenue. 👎

The company cited weaker traffic as the primary driver, telling investors that attendance fell by 22% YoY. They also subtly blamed Jesus for the weak traffic numbers, noting that Easter was later this year and that spring break was weaker than expected. 😂