Two Cents On “Value” in Crypto

Happy Friday. It’s June 3, 2022. Today’s edition is coming to you in something resembling “live” from Atlanta, GA.

We’ve got a fun value-oriented edition of the newsletter for you today. Our first story is about Token Terminal, a dashboard looking to help investors get to the core of what is “valuable” in the world of crypto and web3.

And, as we tee off the month, our start-of-month franchise about TVL is also featured in today’s edition. They’re both a little hefty, but we think they’ll be good reads for people at all stages of their crypto journey…

We’ll jump right into it for the day. But, before we do that, here are today’s moves:

Crypto has some all-star metrics — market capitalization, circulating supply, distribution, TVL, to name a few. However, though these metrics are designed to help discern the value of a protocol or chain, they don’t do that very well. They’re all indicators of what protocols and chains are seen as valuable by users.

But people appraise things incorrectly all the time; and use or brand doesn’t necessary equal value.

That’s why one new site is getting investors to think differently about value. Token Terminal, which is ambitiously building a dashboard for “every single application that is operating on a blockchain”, is getting investors to leave take crypto’s conventions with a grain of salt. They’re aggregating data points and indicators, especially ones which weigh heavy in the minds of equities traders, to help investors gain a more concrete understanding of the value being created in the business of crypto. 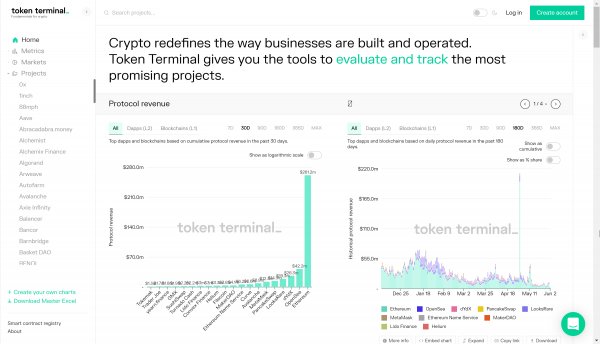 “Companies being built on top of the blockchain are operating at a completely unprecedented scale at the moment,” said Oskari Tempakka, the Head of Growth Operations at Token Terminal. “The platform shift we’re witnessing with crypto is just a more transparent and real-time way of watching startups grow.”

Tempakka, who is apart of Token Terminal’s roughly 15-person team, says that the business of blockchain is “conceptually really similar” to traditional marketplace companies. “If you have read The Intelligent Investor, you could take those principles and apply them directly to decentralized applications and blockchains.”

One thing that Token Terminal aims to impart is that revenue is still a mainstay of many blockchain apps. Wall Street elites say that crypto isn’t backed by anything, but many crypto companies actually are backed by revenue; and the newfound demand for decentralized applications.

The hard part is ascertaining where that revenue is being generated and who it’s going to.

“There are a lot of things that need to be taken into account regarding the nuances of the operating model – and what is actually driving the growth of revenues and usages,” Tempakka said. “And you can’t use revenue alone to start comparing protocols and products.”

For example, a blockchain like Ethereum gets its revenue from fees accrued from mining and block creation. 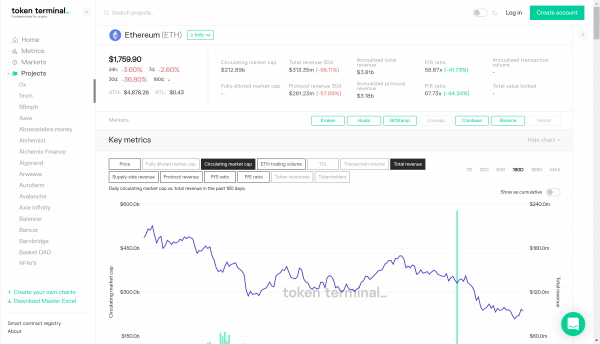 For blockchain game Axie Infinity, it’s from fees accrued through its marketplace and the burning of its $SLP token.

For Compound, one of crypto’s earliest DeFi apps, it’s a fee structure in its marketplace which flows to the protocol.

These are all “crypto businesses”, but they are all very different in scope. Just as it would be unfair to compare the fundamentals of tech companies to utilities companies, it’s unfair to value blockchains, GameFi apps, NFT protocols, and DeFi protocols against each other.

But ultimately, Token Terminal has resources for many of crypto’s biggest chains, protocols, and games… and those tools and resources can be a value-add in the arsenal of retail investors. It doesn’t just unlock revenue figures, common traditional ratios such as P/E and P/S, and TVL, but also allows you to make quick-and-easy comparisons among alike protocols and chains.

Tempakka says there have been a few surprises, or lessons learned from Token Terminal, while building the product. One of the biggest ones was the sheer “efficiency” that decentralized apps are operating at.

“These self-executing smart contracts and permissionless, user-owned, and user-governed protocols are competing with very complex governance structures in place at large corporations,” Tempakka said. “That’s going to be a ‘wow’ when you see how the usage is developing on these platforms.”

Ultimately, one of the most pertinent is takeaways from Token Terminal is that there is a tried-and-true methodology to investing in companies. Token Terminal is demonstrating that, on some level, most of what works in TradFi can be extrapolated onto crypto, even in spite of it being a risky “early Internet”-esque technology, according to Tempakka.

“We really strongly believe that what we’re witnessing in DeFi right now is the infrastructure that will be powering the future user interfaces that will come along, but there’s a long way to go.”

In the grand scheme of things, there’s bound to be winners and losers. There always are. However, the protocols and chains with the most sustainable  and revenue-accretive models have greater odds to go the distance.

“We’re all about value investing, that’s our core,” he adds.

Check out Token Terminal at tokenterminal.com.

At the start of every month, we recap moves in one of crypto’s star indicators — Total Value Locked. It helps paint a picture of which blockchains, protocols, and projects are used in the realm of web3 and crypto.

TVL is one of the leading indicators that crypto maximalists can lean on to glean value — or disconnects in valuations — in various projects and chains. Some leading indicators such as market capitalization are affected largely by market participants, but revenue and TVL are a different story. They reflect realized value.

In mid-May, we did a “special edition” of our TVL franchise after the collapse of the Terra blockchain. However, to start off June, DeFi’s total TVL is sitting at $106.6 billion according to DeFi Llama.

Here’s a few conclusions which are now crystal clear after the collapse of Terra:

😲 The Tron chain is the biggest benefactor from the collapse of Terra, in part because of the launch of its own Terra-esque stablecoin, $USDD.

👀 The only protocol (with a TVL >$1 billion) with a rise on the month was JustLend. The Tron-based protocol is where the chain’s Terra-esque new stablecoin can be staked for high interest rates.

🦢 Collateral-backed cryptocurrencies like $DAI survived yet another “black swan”; its issuer, MakerDAO, is back at #1 among protocol TVL.

Since the collapse of DeFi in mid-May, the environment has changed very little. Most chains and protocols are still down double-digits on the month. And while some have shown inflows week-over-week, but they have been insufficient to water down one of DeFi’s worst months in recent history.

Outside of the proven DeFi projects, a few protocols — mostly high-risk, new protocols with TVLs under $1 billion— really proved their stuff this month:

📻 RadioShack (yes, that RadioShack) launched its own decentralized exchange after its IP was bought by internet celebrity Tai Lopez. Its TVL rose +342% this month, in spite of all the losses in DeFi, to $32 million.

Ethereum and Solana-based lending and borrowing marketplace Maple saw its TVL rise by +286%, including a 153% increase in just the last seven days, to $82 million. The protocol helps institutions like Alameda Research, Genesis, and Abra borrow money from on-chain lenders.

Arrakis Finance continued its climb, nearly doubling this month. It sat just below a $1 billion TVL today at $979 million. The Gelato Network spinoff is currently allowing users to lock $GEL for a share of the forthcoming $SPICE airdrop.

That’s a wrap for this edition of our TVL franchise. Still curious what’s up? Check out DeFi Llama!

With the upcoming ‘Merge’ update slated for September, Ethereum ($ETH.X) is taking up a good chunk of the cryptocurrency news space. Here’s what’s been happening with Ethereum:

In case you missed it or are out of the loop, the ‘Merge’ for Ethereum is a transition from Ethereum being a Proof-of-Work (PoW) blockchain to a Proof-of-Stake (PoS) blockchain. The main purpose of the ‘Merge’ is to increase scalability, reliability, efficiency, and accessibility.