Good evening everyone and welcome to the end of the work week. 👍 The crypto market was drug down on Friday but we won’t let that spoil our well deserved weekend.

The whole market contracted today, falling 2.16% to a global crypto market cap of $2.17 trillion. Nearly every large-cap crypto fell today. That made it easy to identify a clear-winner: Avalanche. It cascaded higher after a week of big moves for the coin. $AVAX.X was up 11.9% today, surpassing the market caps of $DOT.X and $LUNA.X.

$BTC.X blundered 3.1% and continued its downtrend below $50K. It’s probably safe unless it drifts below $42K. 📉  Meanwhile, $ETH.X followed in its footsteps with its own 2.1% dip. However, its a far cry from where it was earlier today (it was down 6.4% intraday.) Can these two large-cap coins turn it around this weekend? Place your bets…

With the Democrats punting their flagship Build Back Better legislation to next year, it looks like that crypto traders can expect another year of tax loopholes. That’s because the controversial “wash sale rule” will probably not be imposed on crypto or commodity traders as it would have been if BBB passed, affording them the opportunity to continue selling their holdings at a loss and buying them back immediately. This is not the case for equities and bond traders, who have to wait 30 days after selling to buy an asset back.

Here’s what is going down today:

And how about the prices of the large-cap cryptos? Well, they could be better:

If Bitcoin was v1 and Ethereum was v2, then what is v3? Analysts from institutions and scrappy retail investors have been spending the whole year placing their bets on next-generation blockchains, which have considerable improvements in scalability over its predecessors.

We’ve already come to embrace names like Solana and Cardano as potential contenders. However, one analyst at Bank of America is placing a less-conventional bet in Avalanche, which claims to have “the fastest smart contracts platform in the blockchain industry.” Analyst Alkesh Shah suggests that Avalanche could be a meaningful (cheaper) alternative to Ethereum.

The crypto has gone on a tear this week, rising over 34% on renewed momentum from the BoFA report, the launch of USD Coin support on the blockchain’s mainnet, and support on crypto custodian BitGo. The report itself is gauged as a bullish indicator, support for USDC is a boost to the blockchain’s DeFi ambitions, and BitGo support likely supports the narrative that institutions are interested in the blockchain’s potential.

We’ve covered Avalanche at length on its meteoric rise, leaning in during the launch of its Avalanche Rush liquidity mining event. Avalanche Rush offered over $180 million in rewards on Aave, Curve, and SushiSwap — which all launched on Avalanche to support its DeFi growth. Since then, the amount of liquidity on Avalanche has risen to over $16 billion according to Markr.io. While that’s a far cry from the over $100 billion in total value locked (TVL) on Ethereum, it exceeds those of other new scaling blockchains such as Solana, Fantom and Polygon. It has also accomplished that in a fraction of the time.

Given institutional support, the blockchain’s fast-rising DeFi prospects, and its growth, it might be fair to say that Avalanche has the propensity to continue its rise even further. As of this writing, Avalanche is the 7th largest blockchain (ex-stablecoins), sitting at a market cap of over $27.4 billion.

Facebook’s decision to rebrand itself as “Meta” shined light on a lesser-known portion of the crypto market: projects falling at the intersection of digital worlds, gaming, NFTs, and crypto. Two of the projects which garnered much of the economy of attention from investors were The Sandbox ($SAND) and Decentraland ($MANA), which both went on meteoric rises in the weeks following the Meta announcement.

One of the projects that investors largely missed, however, was Decentral Games. $DG has referred to itself as “the metaverse’s first casino.” Over the last year, the project has gone from mere idea to one of the most active metaverse properties in Decentraland. Users can visit one of Decentral Games’ handful of casinos to play Blackjack, Slots, — and they can choose to do so for free, or with the crypto of their choice.

Though the iGaming part of Decentral Games’ business has been popular worldwide, it has one notable exception in the U.S, where iGaming sits in a grey area of the law. The law is not particularly decisive about if online casinos or gambling are legal in most states. That’s one reason why Miles Anthony, the founder and project lead of Decentral Games, is banking that $DG‘s next big thing will be play-to-earn poker.

“Look at how successful Axie Infinity was with a P2P battle game, it has been able to create billions in value,” Anthony said. “A household game like poker is widely enjoyed throughout the world would be powerful for play-to-earn.”

Since the interview, Anthony and his team have rolled out Decentral Games’ play-to-earn (or P2E, as it’s known by many) poker. Anthony explained in order to play and actually earn, users would need to buy a wearable NFT in the Decentraland universe (and there’s only so many). Once you have your hands on one, you can hop into Decentral Games’ ICE Poker Lounge to compete against other NFT-holders. You’ll be paid in a crypto called $ICE for completing rewards and climbing the leaderboard everyday. 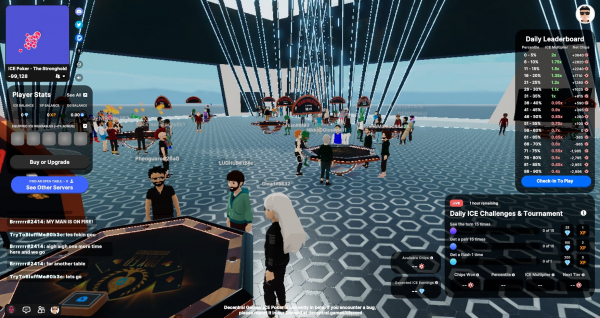 Many users have been able to delegate or play for significant gains over their original NFT investment (the most recent mint was worth 0.25 ETH and 1 DG staked in the protocol’s “governance” platform.) However, some are stacking their $ICE instead of selling. That’s because the NFTs can be upgraded to accrue rewards and bonuses faster.

“Once you complete challenges and get on the leaderboard and get your ICE tokens, you can use those to get higher yield-benefiting bonuses, allowing you to upgrade your NFTs, and there’s a finite supply, so we expect there to be a discrepancy in pricing between different level NFTs,” Anthony said. “You could take your ICE tokens and sell them for USDC, however you might want to burn them to actually increase the value of the NFT and the rewards you get from it.”

Maybe you’re not a poker guru? That’s okay, Anthony says on Twitter that many users decide to “delegate” their NFT to another player (often through the protocol’s Discord) to play on your behalf, gaining a portion of their winnings as passive income. “I think delegation is going to really be the core of our play-to-earn ecosystem and we saw from Axie Infinity that delegation has the potential to be pretty massive,” Anthony said.

So far, the launch of P2E has been a huge success for the metaverse casino. The treasury for Decentral Games has risen from low-$10 millions to nearly $50 million in assets. The protocol has held mints for three editions of their ICE NFTs, with the fourth and fifth expected to happen in the weeks ahead. For more updates, follow @decentralgames on Twitter.

The latest celeb hopping on the NFT train? That would be Melania Trump, the Former First Lady of the United States. Melania is launching an NFT watercolor painting of her eyes called “Melania’s Vision.” The First Lady will also release additional digital artworks as part of her NFT venture in January 2022.

Bidding for the NFT will start at 1 SOL (roughly ~$170 at this writing) and last from Dec. 16 until Dec. 31. The social media network Parler will host the auction. Melania shared:

“I am proud to announce my new NFT endeavor, which embodies my passion for the arts, and will support my ongoing commitment to children through my Be Best initiative. Through this new technology-based platform, we will provide children computer science skills, including programming and software development, to thrive after they age out of the foster community.”

Melania’s NFT announcement has caused some drama, however. The president and CEO of the National Committee for Responsive Philanthropy, Aaron Dorfman, called the announcement a “huge red flag” as celebrity fundraisers which only delegate a “portion” of proceeds to charity are typically not philanthropically motivated.

‘Tis the Season to Gift Crypto

Crypto… as a gift? It’s more likely than you think. A CNBC article published Wednesday suggests that Millennials and Gen Zers are planning to spend thousands on cryptocurrency, NFTs, and metaverse land as holiday gifts. Another survey done by crypto firm BlockFi shows that one in 10 Americans plan to gift crypto “to a loved one this holiday season.”

The gifts make sense, seeing as though CNBC found that crypto is where the bulk of millennial millionaires have socked away their money. Odds are, it wouldn’t hurt to gift a few sats or a fraction of an Ethereum. And in support of that, both Robinhood and Coinbase are rolling out crypto gifting features for the holidays.

Both Robinhood and Coinbase allow you to send a pretty-looking digital card, alongside a gift of a crypto of your choice, to a recipient. Robinhood only offers Ethereum, Bitcoin, Dogecoin, Litecoin, and a few other legacy coins though, so if you’re looking for more breadth in your gifts, you might want to opt for Coinbase. Then, you’ll be able to gift via email.

Coinbase’s gifting feature is already live, while Robinhood’s will roll out on Dec. 22.

The markets were little-changed week over week and on the day. Bitcoin remained below $30,000, despite mounting an effort to get over it last night. Ethereum also remained below its $2,000 mark.

EXCLUSIVE: FatMan Speaks! Our One-on-One with the Terra Chain’s “Man of the People”

Terra has collapsed. The TerraUSD is dead.

The last few days have been filled with coverage about its untimely demise. However, in Terra’s own Research Forum, plans are already being made about its comeback plan.

Some of you were quick to point out last week: I aspirationally put “Happy Wednesday” on a Friday. I guess that — deep down — I wished it was Wednesday for some reason. Alas, nobody wishes for Mondays… but here we are.

Crypto prices are little-changed from last Friday. Bitcoin was sitting a lil’ bit above $30,000 and Ethereum was just a pinch over $2,000.

It All Comes Crashing Down: Terra and UST Collapse At Last

The collapse of the Terra blockchain, and the TerraUSD stablecoin, has finally come to pass… and with that, the markets are heading north again.