Remember about all those people who locked up their ETH?

I am going to water this entire thing down as much as possible, probably to the point where the trollololol fan bois are going to post things like, ‘EHRMEGURD DUR STOOPIDS DOESN NO WUT TALKING ABOOT.’

There are/were a number of steps to completing the switch from PoW to PoS. One of the first steps was to get enough people to commit to supporting the switch to PoS. ETH needed enough validators, and you could only be a validator if you could commit 32 or more ETH.

If you didn’t have 32 ETH yourself, you could form a club of your besties and pool together your ETH and create a staking pool.

But here’s the catch:

That ETH is locked up until the switch to PoS is complete. Which is slated to ‘finally’ be done on September 15, 2022. Sounds great, right? If you’re a long-term investor or a hedge fund, this doesn’t phase you. If you’re a normal person, let’s take a look at the hell you’ve had to go through:

It’s Like Watching Your Pet Die Behind A Glass Cage, And There’s Nothing You Can Do About It 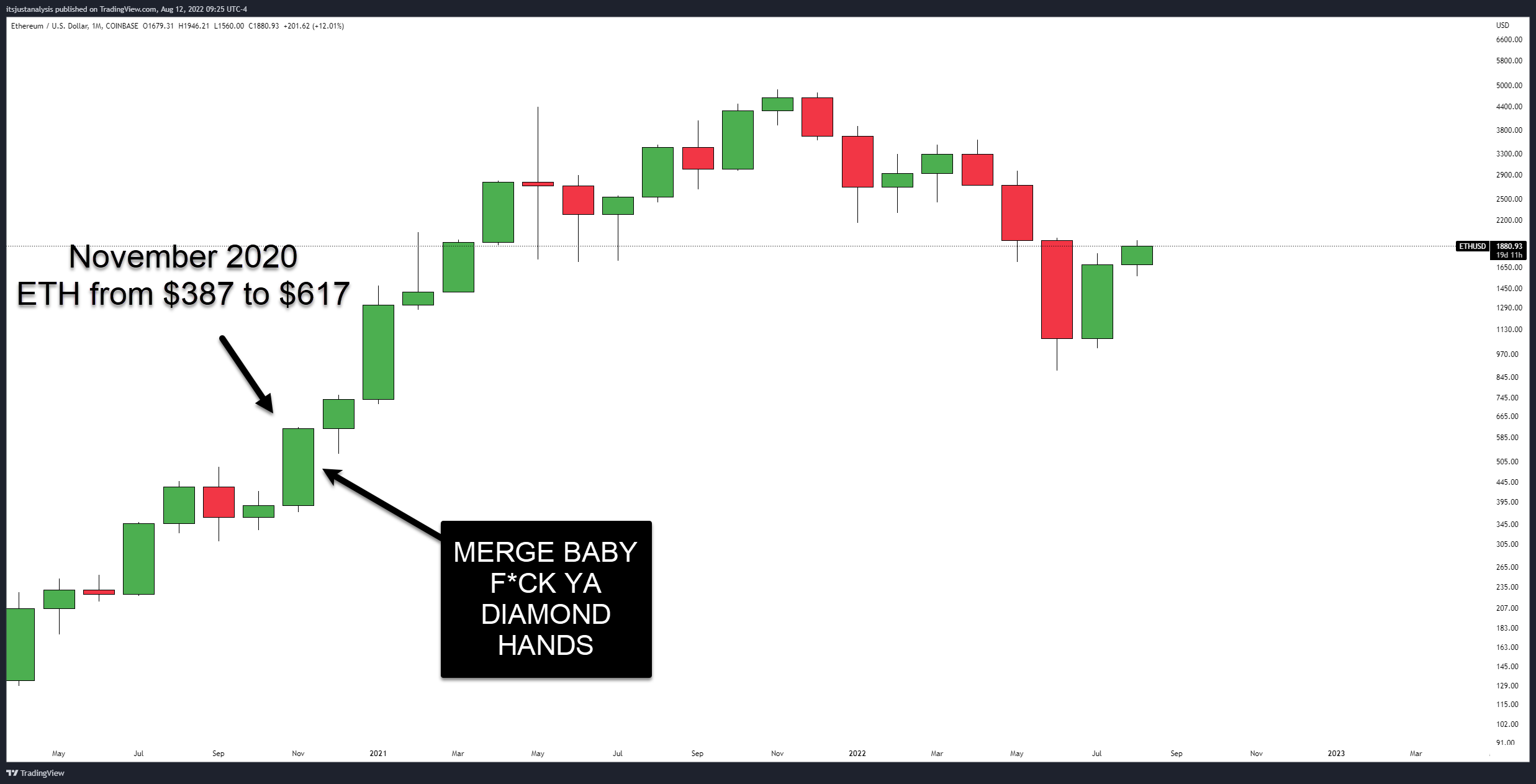 Imagine you’re one of the lucky few who bought Ethereum in November 2020, let’s say, at an average of $500. You feel good. You think, ‘Won’t take long for the Merge; I can afford this.’ You think ETH will be 1,000x, so risking money you can’t afford to risk will pay off soon, the Merge isn’t too far away right? 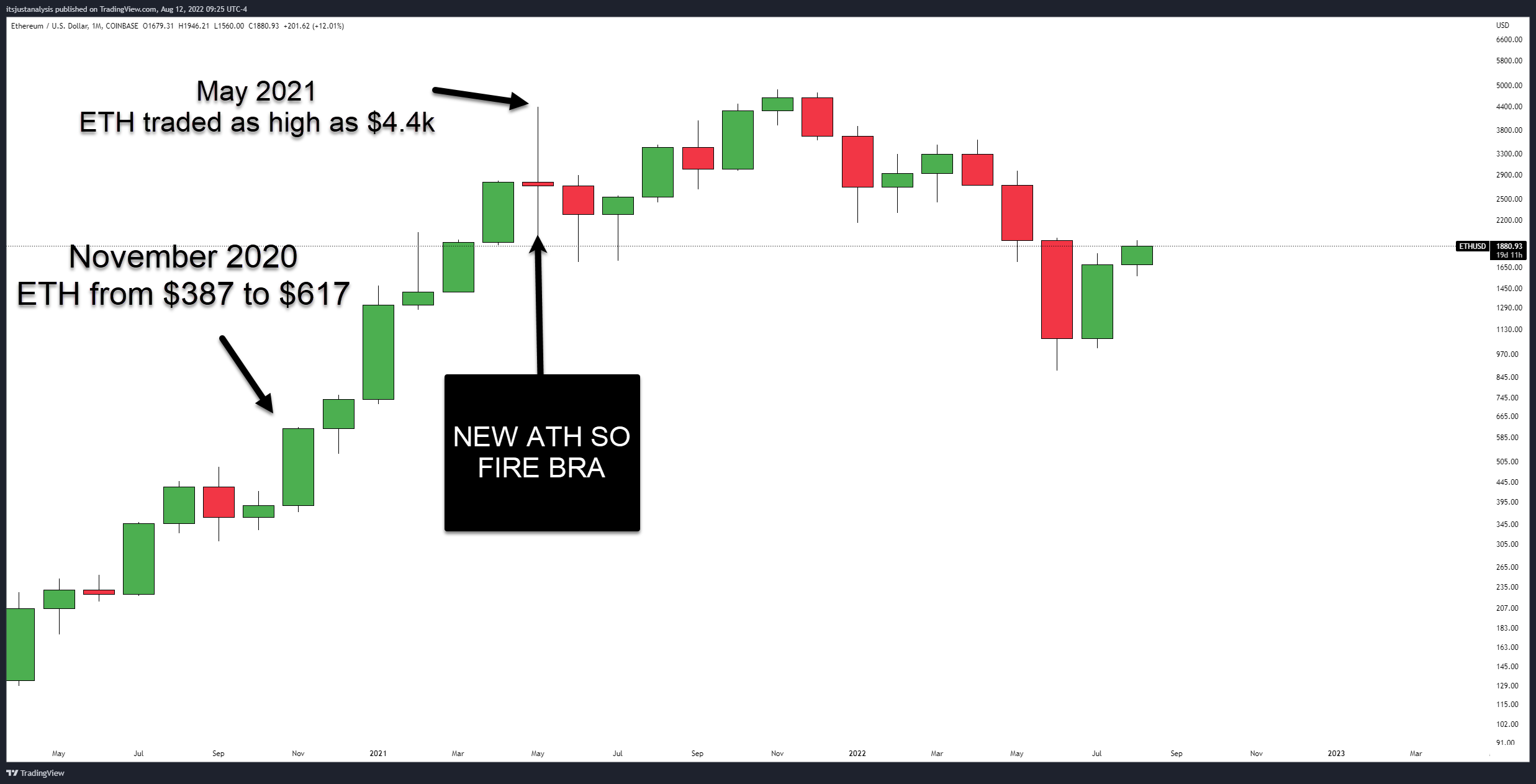 Summer of 2021 passes. Ya, there was some anxiety, but you dealt with it. You convince yourself you have bawls of steel – easy to say that when you can’t touch your ETH. 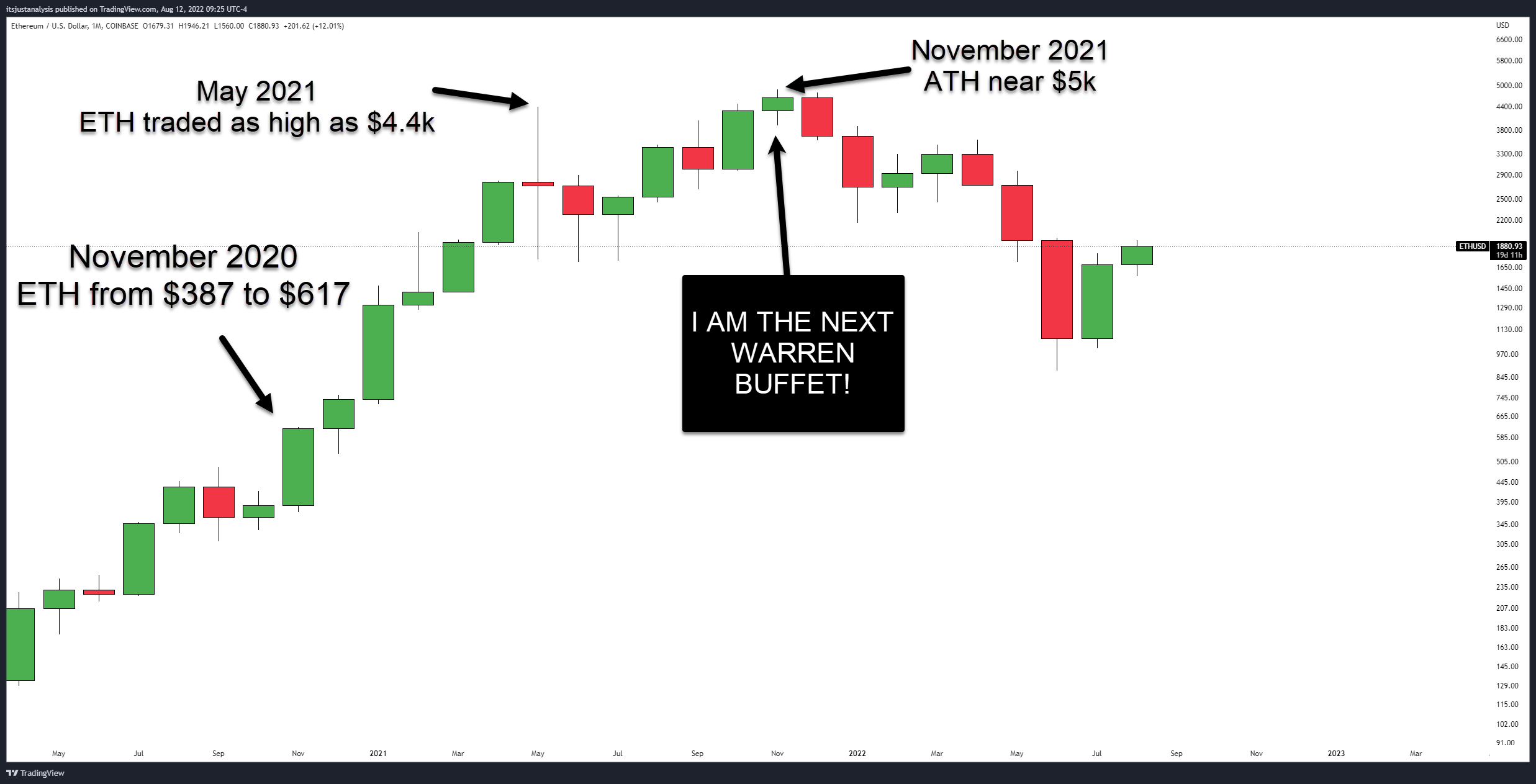 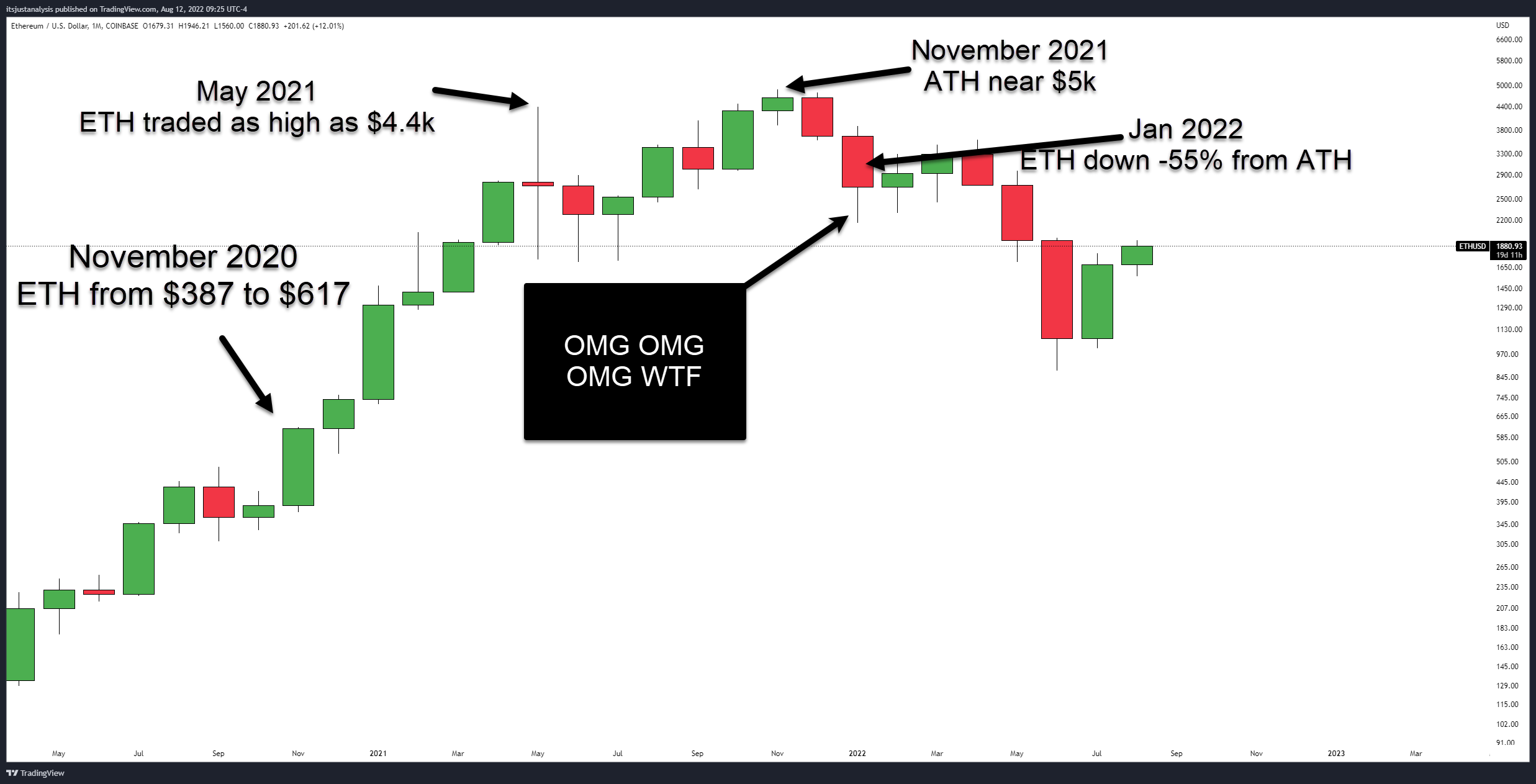 Imagine if you are/were one of those ETH hodlers, stuck in a position you can’t get out of. Maybe you’re doing just fine, but a lot of people are not. They’re thinking, ‘when is this going to end?’ 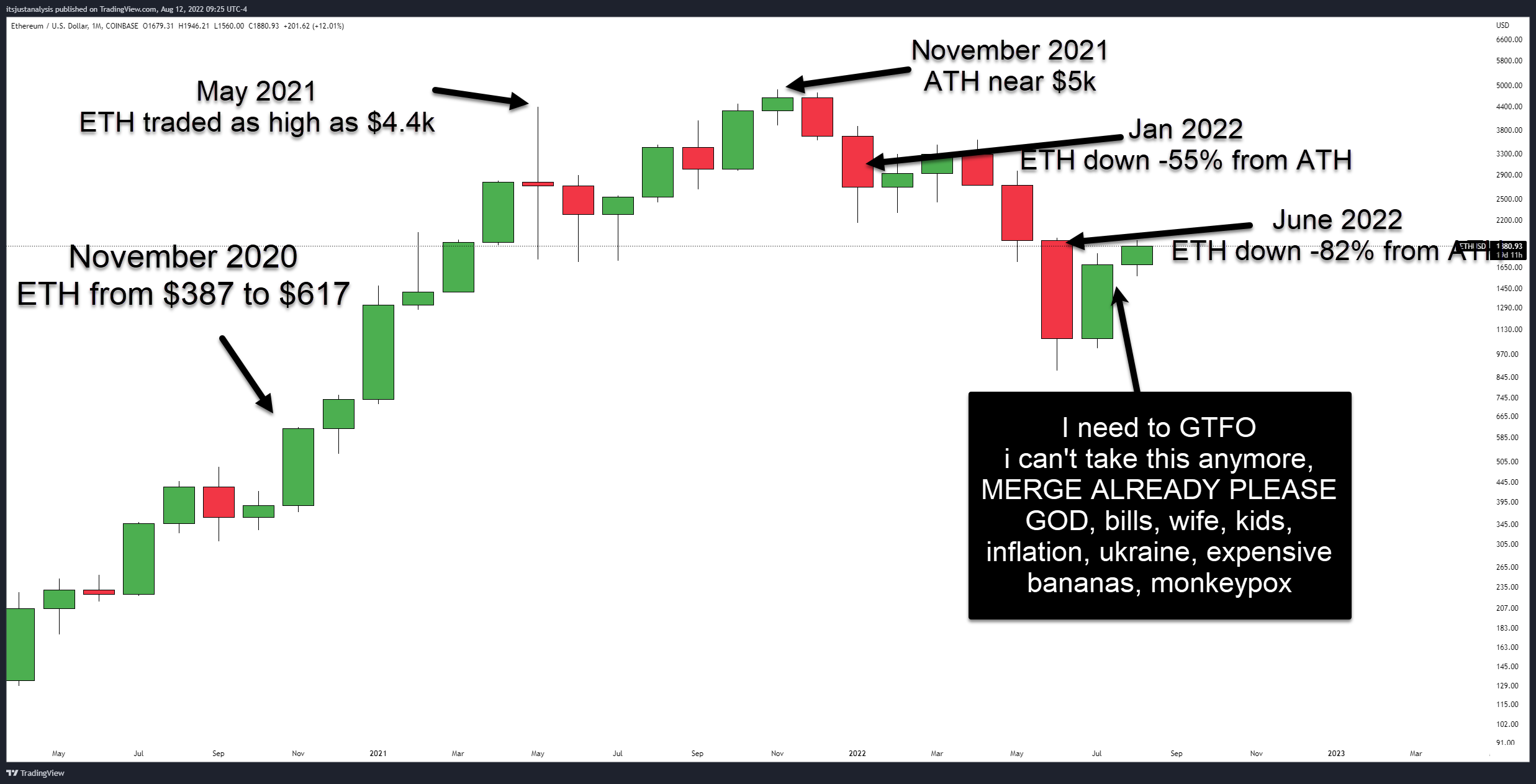 It’s June 2022, and you end the month with your ETH slightly more than double what you paid for it. Nice gains in any market, but all you can think about is the what-ifs and the misery of watching all those gains go down the tube.

Buy the rumor sell the news is something that occurs in the crypto space, too, so the anticipation of some selling when the Merge is complete is already a concern. Couple that with the trapped validators, many of whom want to GTFO ASAP, and you have a recipe for some crazy volatility and probable selling pressure.

Well, it finally happened. After several months of waiting to see what, if anything, would happen to Do Kwon after Terra’s Luna ($LUNAC.X) and TerraUSD ($UST.X) collapsed, the crypto community got an update today.

The Seoul Southern District Prosecutors Office (South Korea) issued an arrest warrant for Do Kwon and several others on Terraforms team. Complaints continue to be filed against Kwon and Terraform. Kwon is accused of operating a Ponzi scheme, fraud, and tax evasion.

October (Pumptober) is, historically, one of the better-performing months for cryptocurrencies. How good is it? Let’s take a look.

Do ‘Con’ Kwon and Terra’s Luna will go down in cryptocurrency history as another Mt. Gox, Bitconnect, and OneCoin story. Everybody and their dog and cat got into Luna. Kwon was one of Forbes’ 30 Under 30, and even the CEO of Galaxy Digital, Mike Novogratz, got a hugenormous tattoo of a wolf howling to Luna.

But then the house of cards fell. Kwon left South Korea for Singapore while a handful of Terra executives were stuck in South Korea and banned from leaving. Then, on September 14, 2022, South Korea issued a warrant for Kwon’s arrest – Singapore said they’d help.

The SEC Chairman took to Twitter this morning, posting that the SEC charged Kim Kardashian for unlawfully touting a crypto security. He also embedded a semi cringe-worthy SEC-produced video warning investors about influencers and celebrities who promote cryptocurrencies and other products/services.

In a lengthy Twitter thread, Cardano’s ($ADA.X) founder and former Ethereum ($ETH.X) co-founder, Charles Hoskinson lambasted the crypto media industry and fanboy base as a whole.

Hoskinson highlighted the media’s negative focus on Cardano’s three-month delay of the Vasil hard fork, yet gave a pass to Ethereum’s three-year delay of the Merge. He also lamented the ‘us vs. them’ mentality and that it does more to hurt the industry than help.

The Daily Rip and Litepaper had a fantastic opportunity to sit down with the CEO of one of the biggest names in ETFs: Jan van Eck. With the upcoming Merge for Ethereum ($ETH.X), Cardano’s ($ADA.X) Vasil hard fork, and the myriad of other events in the crypto space, there hasn’t been a lot of focus on the upcoming SEC decision over the fate of VanEck’s third spot Bitcoin ETF application.

The SEC has consistently rejected every spot ETF application. Why is that? And what is Bitcoin/crypto’s role in an overall investment portfolio anyway? We get into these questions and more in today’s exclusive chat with one of the biggest names on Wall Street.

Can you give us a brief intro on who you are and what VanEck is for those who are unfamiliar?

VanEck was founded in 1955, and our approach to investing is what I call ‘macro.’ It’s what international investors are very used to, which is looking at what’s happening worldwide. History as it reminds us that the world is radically changing all the time. As money managers, we try to offer funds that take advantage of the changes in the markets.

My father started the firm and is best known for creating the first gold fund in the United States in 1968, which led to our breakthrough. At the time, gold was pegged to around $35 an ounce and had been pegged against the dollar, not for just a couple of months but the entirety of US history—almost 200 years.

He took his fund and almost all the assets and bought gold mining shares, thinking that that would change. And it did a couple of years later. So I think that’s the kind of perspective we bring to the market.

Coming to Bitcoin in 2017, we had to determine: is Bitcoin ($BTC.X) going to be a real competitor to gold or not? We determined that it was. There was not much to read on Bitcoin back then unless you read the whitepaper or listened to some podcasts, but that was our conclusion. Since then, we’ve been saying that it should be considered a part of people’s portfolios.

Speaking of Bitcoin, let’s get right into that discussion. What role do you see Bitcoin playing in a portfolio?

Ethereum Merge Is A Nothing Burger?

But price action showed a fairly standard version of Buy The Rumor, Sell The News.