FTX ($FTT.X) continues to behave as the savior of the distressed crypto market. Liquid Global, a recently hacked exchange, lost upwards of $90 million in the hack. FTX issued a $120 million loan to shore up Liquid Global’s capital position, provide liquidity, and speed up capital projects.

FTX is also partnering with Busan City, the ‘Blockchain capital’ of South Korea, to build a local crypto exchange. Busan has a similar partnership with Binance ($BNB.X).

And this is interesting: some recently released visitor logs from the White House show that Sam Bankman-Fried, FTX’s Director of Government Relations and Policy, and FTX’s Head of Policy (former CFTC commissioner Marke Wetjen) visited with President Biden’s head of policy in May 2022.

No details of the meeting were disclosed.

Ever asked for a refund from a company and received a little more back than you were owed? That happened to a woman in Australia. She asked Crypto.com ($CRO.X) for an AU$100 refund and instead got nearly AU$10.5 million (US$7.15 million).

How long did it take for Crypto.com to realize its mistake? Nearly seven months. During that time, the woman bought a million-dollar home, sent AU$430,000 to her daughter, and made various other major purchases.

The exchange is taking her to court to recover the money. Which is kind of funny if you think about it. When you send your crypto to the wrong wallet, exchanges shrug their shoulders and say, ‘sorry bra, your SOL.’ When the exchange makes an oops, they want to throw the cops after you.

Ya, it’s two different things, but you probably get the point.

Ethereum’s ($ETH.X) ‘Merge’ is ready to go on Coinbase ($COIN), but interestingly, the same can’t be said for Cardano’s ($ADA.X) upcoming Vasil hardfork. This is a little odd given that Cardano is the fourth largest traded crypto by volume, behind Bitcoin ($BTC.X), Ethereum, and Solana ($SOL.X). ADA hodlers on Coinbase could be stuck moving their ADA if Coinbase isn’t ready in time.

Voyager ($VGX.X) hasn’t been a major topic of discussion lately, mostly due to the pause in info from the bankruptcy proceedings. However, Voyager did recently send out e-mails to customers this afternoon. The e-mail is titled Claims Process Q&A. 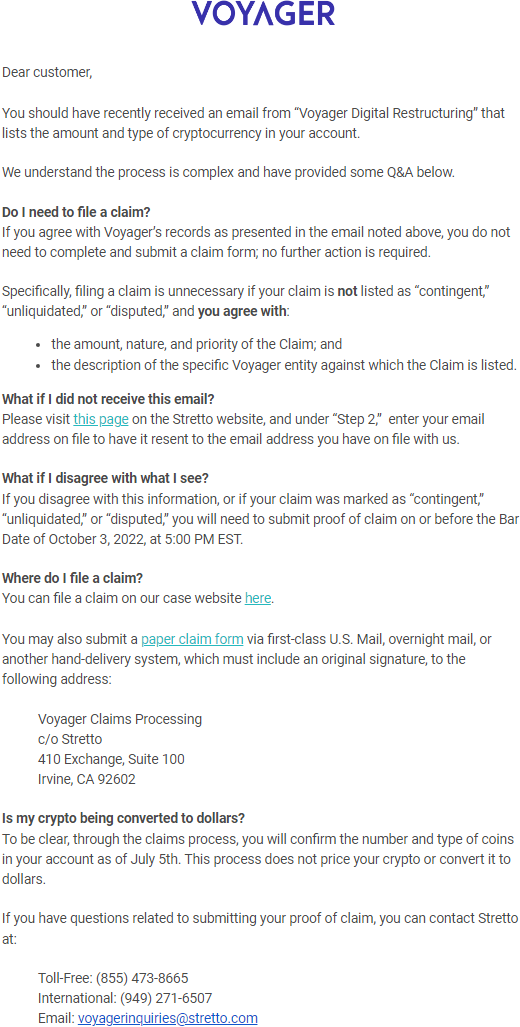 Link to the Stretto Voyager FAQ

Nexo Must Have A Guardian Angel

Crypto lender Nexo ($NEXO.X) is like the Minnesota Vikings of crypto this year (also, they both have purple in their logos). This has got to be a combination of fate and good work because someone there is probably getting a bonus this year.

The first bullet Nexo dodged was its offer to buy BlockFi ($BLOCKFI.P) this past Summer. Nexo was willing to partner with FTX on acquiring BlockFi – but BlockFi decided to go it alone with FTX’s bid. The total value of Nexo’s offer was roughly $850 million.

I’ll Take Doge For Half A Million, Alex

Nearly everything about Dogecoin ($DOGE.X) that comes up in the news is silly to unbelievable. No one in their right mind would have thought that Dogecoin would be one of the highest market cap and stalwart cryptocurrencies to exist 3 or 4 years ago. But here it is.

Did you know you can buy and sell usernames on Telegram? It can be done through Fragment (unless you live in the US). Someone paid almost $550,000 for the @doge Telegram handle. It is the 8th largest sale according to Fragment.

What Is Big Money Doing?

No matter how long you’ve been in the cryptocurrency space, no news or event has been more bearish than the collapse of FTX. Maybe there’s some recency bias from your author’s perspective, but neither Mt. Gox, the 2018 bear market, nor the Covid Crash felt as ugly as crypto does now in late 2022. 2022, in general, has, thus far, been the worst year from a ‘bad news’ perspective.

Fear, Uncertainty, and Doubt (FUD) is massive. $10s of billions is seemingly wiped out, and millions of creditors are affected. Institutions and individual investors have been equally hit by 2022’s nightmare of one collapse after another. But what are the ‘whales’ doing? What is Big Money up to? What are the institutions, the major fund managers, the top dogs – what are they doing during this crypto-pocalypse.