Clear To Take Off

Happy Tuesday everyone. Markets were up for a fourth straight day. 📈

Most sectors ended in the green. State-owned banks (+3%) stood head and shoulders above the rest. Metals and FMCG stocks advanced +1%. Meanwhile, TCS’s earnings hangover continues to hurt IT (-0.8%) stocks. 🥴

Schaeffler India (+6%) will consider the proposal of a stock split on Oct 28. ✌

Movie Time! Cinema halls will be allowed to open with 50% capacity in Mumbai from Oct 22. PVR and Inox Leisure closed +2% near the day’s high. 🍿

Fertilizer stocks were in focus today. The Government may approve a Rs 28,600 cr fertilizer subsidy this week, as per media reports. GSFC, Zuari Agro, and Gujarat Narmada advanced between 3%-4%. 💸

Delta Corp (+5%) hit a fresh record high after the company’s net loss narrowed to Rs 22 cr in Q2. The casino and hospitality company is considered to be a “reopening play”. Investors are betting on easing restrictions and a travel boom to boost the company’s future earnings growth. 🎰 Here are the key stats:

Margins have been impacted because input costs are going up… we have increased prices in the pig iron business, but the ductile iron pipe business takes a bit of a time; it’s more stable. We have an order book of +12-14 months.

Rakesh Jhunjhunwala backed Akasa Air is all set to take off next summer! Fasten your seat belts cuz it’s going to be one hell of a ride. ✈

SNV Aviation, which operates Akasa Air, has received a No Objection Certificate (NOC) from the Ministry of Civil Aviation. Ex-Jet Airways CEO Vinay Dube will be the pilot in charge of the new airline. 👨‍✈️

Akasa Air plans to follow an ultra-low-cost carrier (ULCC) model. Typically, these airlines are famous for low fare rates. But how do they pay the bills? A ULCC airline makes money from advertisements, food and beverages (except water), and limited baggage allowances. 80% of the Indian aviation market is dominated by low-cost carriers. 📊

But, it is by no means the gold standard. Take the case of Kingfisher or Jet Airways. Airlines in India have been struggling for years due to competition, weak pricing power, and high fixed costs. 🔒

Back in July, we discussed Jhunjhunwala’s awesome timing of foraying into the aviation space. But, a lot has changed since then. Jet Airways is back with a fresh lease of life. The troubled airline is ready to spread its wings from Q1 2022. Air India’s return to Tata Sons after 68 years is sure to increase competition. 🤼‍♂️

The new airline will have its task cut out from day 1. We just want to wish them All The Best! 👍 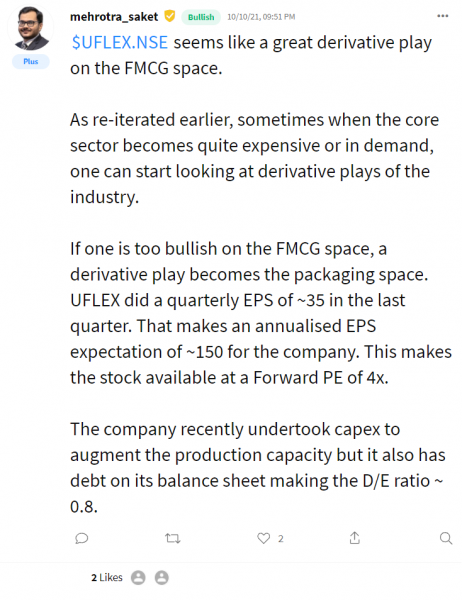 Here’s an interesting fundamental take on Uflex Ltd by Saket Mehrotra on Stocktwits. Add $UFLEX.NSE to your watchlist and track its performance.

CRED is reportedly in talks with investors to raise more money. The latest fundraise is expected to value the startup at $5.5 billion, according to TechCrunch. 💰

Details are scarce at the moment. Early reports indicate that CRED will use these funds to pursue overseas expansion and acquisitions. The Bangalore-based startup raised $215 million in a Series D funding round back in April. 📊

CRED rewards customers for paying their credit card bills on time. It does so by giving them points that can be redeemed for cash back and discounts on high-end brands. It claims to serve 6+ million customers making up +20% of all credit card bill payments in India. Tiger Global, DST Global, and Falcon Edge, are large investors in the company. 💳

There’s a lot going on at CRED. The company recently invested $5 million in CredAvenue. It is also in talks to back fintech startup Uni. CRED recently launched peer-to-peer (P2P) lending and is also busy scaling up other revenue channels. 🤑

❣ Man Builds Rotating House So His Wife Has Better Views

😥 If Work From Home Is Making You Depressed, You’re Not Alone. But A Law From The Great Depression Can Fix It.

Greetings, everyone! The weekend is upon us. 🎉

Nifty and Sensex ended lower for a 2nd straight week. Concerns over the new Covid variant and its impact on the global economy dented investor sentiment. Midcaps (-3.3%) and Smallcaps (-2.9%) also saw deep cuts. 🔻

Will Crypto Survive In India?

Happy Wednesday everyone. Markets closed down. 📉

Nifty and Sensex dropped sharply in the last hour of trade to close near day’s low. Midcaps (-0.4%) and Smallcaps (+0.6%) traded mixed. The advance-decline ratio was evenly split. 😶

Tale of The Tape

Nifty and Sensex rebounded from morning lows as investors bought the morning dip. Midcaps and Smallcaps also pushed higher. Both closed up +1.8% each. The advance-decline ratio (4:1) remained firmly in favor of the bulls. 🐂

Hello, everyone. The stock market had a bad day.

Nifty and Sensex fell the most in over 7 months. Concerns over steep valuations and fresh spurt in Covid cases across Europe hurt sentiment. Midcaps (-3%) and Smallcaps (-2.8%) also saw deep cuts. 🔻