Good evening, ladies and gentlemen. The market finished the week at lows. 📉 😢 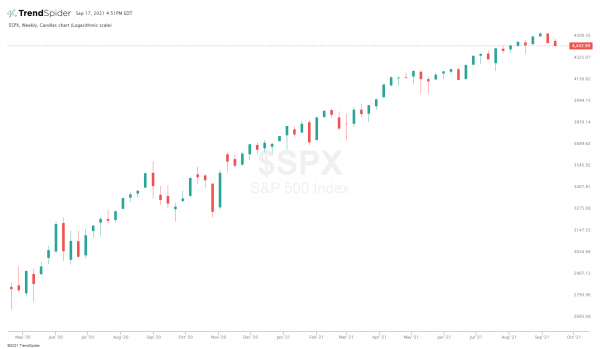 $HLBZ hopped 96.6% to new highs after announcing a partnership with FOX Networks Group to broadcast the Serie B Championship. ⚽

The Deal with COVID Boosters 💉

However, the FDA ultimately rejected boosters for the broader population (Americans ages 16-65), squashing Joe Biden’s desire for a vaccine booster campaign. Biden has underscored the importance of a third shot, hoping to mitigate a more-severe resurgence of COVID in the Winter. A recent study shows that roughly 0.2% of Americans have died from COVID, with many more affected by side-effects.

$PFE stock fell 1.3% today. $MRNA stock dropped in sympathy, -2.41%. 👎 Other vaccine makers like Novavax, which has yet to release its own COVID-19 vaccine, rose 11 basis points before falling after hours.

The 7-day average number of U.S. COVID-19 cases as of Sept. 16 was 150,336. Now, the U.S. has as many cases as it did in November 2020. Those numbers lowered after the vaccine became widely distributed and last Winter came to a close. However, cases are back the rise since June 2021, elevated in-part by the more-dangerous Delta variant.

Delta has had a meaningful impact on the economy, mostly through supply chain woes and prompting higher prices on products. The virus is causing America (and other countries) to leave money on the table. The CDC is now imminently concerned about a new variant, the Mu variant. 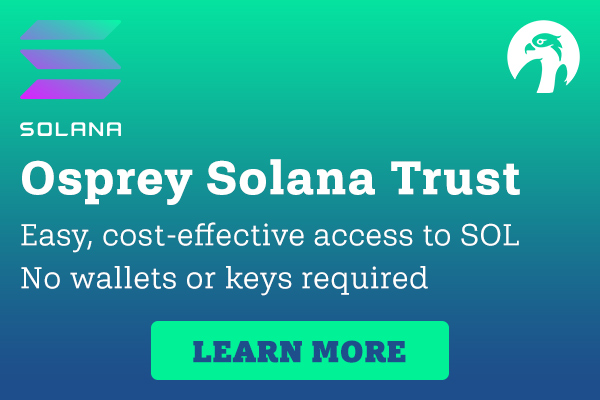 The Osprey Solana Trust offers accredited investors an easy, cost-effective way to access Solana ($SOL.X), the fastest blockchain in the world where developers can build and scale Web 3.0 applications.

CHECK IT OUT HERE!

China’s next target is… Vegas?

Well, not directly. But China’s decision to crack down on gambling in Macau (a region in China that has 7x the gambling infrastructure of Vegas) has prompted Wynn Resorts to draw a $1.5 billion line of credit from Bank of China Ltd. 😬 🎲

Wynn commented that the loan would be used to “fund ongoing working capital needs and for general corporate purposes.” Yeah… oof.

The stocks of US casinos operating in Macau tanked this week on the news that China is deliberating regulations on gambling to promote the “healthy and sustainable development” of the industry. Some analysts revised $WYNN’s price target down to $83/share from $104/share.

“There’s a debate over whether China is even investable right now. You never like to see increased regulation, increased taxes, restrained movement. That all seems to be the status quo.”

Audius, a blockchain-based music streaming service, has an ambitious goal to take on Soundcloud. 🎶 Now, Audius is getting a much-needed cash boost in the streaming wars to expand its appeal from bedroom acts to household names.

The streaming service raised $5 million in fresh funding yesterday. 💸 Investors in the streaming service’s latest round include popular singers and musicians like Katy Perry, Nas, and Jason Derulo. This brings Audius’ fundraising to over $13 million since the service launched. It’s one of the biggest fundraises in entertainment and streaming, at least since artists shelled out for TIDAL’s multi-million dollar raise (which didn’t work out so well).

Audius is already one of the most-utilized dApps in the world, prompting attention from experts who predict that $AUDIO.X, will become one of just a handful of crypto apps that break into the mainstream. As of today, $AUDIO.X is worth just over a billion dollars in market capitalization. 🤑

$HLBZ hopped 96.6% to new highs after announcing a partnership with FOX Networks Group to broadcast the Serie B Championship. ⚽ 📈

Helbiz Media will give FOX exclusive audiovisual rights to broadcast the best Serie B matches and highlights live on the FOX Sports family of networks. Three Serie B games will air in HD with English language analysis each week on FOX. Helbiz Live will provide Italian language commentary for all Italians residing in America. 📺 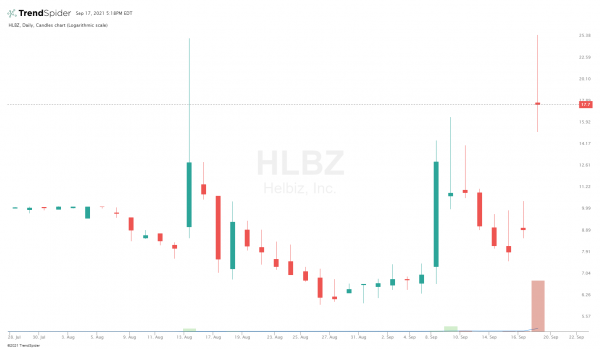 📈 This tech stock indicates a revenue increase of over 70% quarter over quarter – holding 75,000 BSV in treasury – Investor Deck*

📱 OpenSea Released an App — But It’s for Browsing, Not Buying and Selling

😡 Facebook’s Social Balance Is in the Red

🏦 Banks Beware, Amazon and Walmart Are Cracking the Code for Finance