The Weekend Rip: Earnings Are Back

Happy Sunday. You know what time it is… it’s Weekend Rip time!

Indexes were three-for-four this weekend, the Russell 2000 was the sole loser (that seems to be the case often.) 😂

Q3 earnings will kick off this week. We’ve got details below on who’s leading the charge, what’s expected in Q3, and what the future might hold. JPMorgan analysts are supposedly feeling good about pharma, which has had a wild year.

However, on the flip, some companies are expected to come up short in Q3 because of supply chain constraints and rising commodity prices rising. More on them below.

In crypto world: $STX.X rose 58.2% and was trending in the Stocktwits community this weekend. It was joined by $ONE.X, $XRP.X and $XLM.X.

Shiba Inu rose 215.1% this week. Y’all have been emailing us to talk about it for about 10,000 years now. We did a Twitter thread you might wanna check out.

Southwest had a pretty mediocre weekend. It cancelled over 2,000 flights, citing air traffic control issues and weather. However, that’s hard to believe… because virtually no other airlines are having problems.

Here’s how last week went down:

The Return of Earnings Season

Feels like just a few days ago, we were saying goodbye to Q2 earnings. Well, now it’s helllloooooooo Q3 earnings. 👋👋👋

$BLK will also be top of mind, as they near an astronomical $10 trillion AUM. In July, the company’s AUM was $9.49 trillion.

Overall, financials are expected to appreciate more paltry gains compared to other sectors YoY. Refinitiv expects that, once the dust has settled, financials will have booked earnings growth of 18.1% in Q3 2021. I know… “paltry” sounds like a crazy word to use when we’re talking about double-digit growth… but more on that below. 👀

As the SZN progresses, investors will be clinging to bits about supply chain woes, higher labor costs, and their impacts on earnings growth.

Not to be dramatic, but Q3 earnings are expected to be one of the last “big quarters” of growth in the aftermath of COVID. 🦠

The remaining sectors are expecting sector-specific earnings growth of between 0.3% and 28.8%. However, the few companies which have reported so far have overwhelmingly bested analyst expectations. You can get acquainted with the specifics in the Refinitiv report for this week.

This exciting with a really big asterisk, though: this might be the peak of growth (at least for now). Refinitiv expects the fourth quarter of the year to pull down just 22.2% growth YoY. In Q1 2022, YoY earnings growth is expected to be just 6.1%. And those small single-percent figures won’t feel like much to cheer about. 😩

Revenue growth has already been slowing down. In this quarter, it’s expected to be 14%. Next quarter, it will be 10.5%. Then we’ll be into single-digits for much of the foreseeable future.

In short: it appears that the high-powered growth in the COVID recovery is coming to a close and the economy is stabilizing. However, that stabilization might (temporarily) shake investors.

By now, it might feel like we’re beating a dead horse with our two cents on this one, but commodities are rising (and there’s no sign they’ll be giving up any time soon).

Oil climbed 4% this week after the U.S. government indicated that they would not release oil from its strategic reserves. Demand for oil has increased thanks to sky-high natural gas prices. Natural gas, arguably the biggest commodity winner, is up 129% YTD. It’s joined at the hip by gasoil, heating oil, gasoline, and WTI and brent crude.

In short: energy commodities are hot. However, they’re not the only ones.

In fact, the Bloomberg Commodity Spot Index hit an all-time high this week. The index, which tracks energy, metals, and crop futures contracts bested a 2011 record this week. It’s up 92% since hitting a low during the pandemic. If only we knew. 🤯

Coffee, aluminum, cotton, sugar, and other commodities have hit it big this year, appreciating high-40% and low-50% gains YTD.

With commodity prices on the rise, investors will be watching producers and companies interfacing with the commodity crisis. However, an alternative to investing in companies that are dealing in production is buying ETFs with rolling futures (such as $BCI or $PDBC.)

Q3 earnings will kick off later this week… take a look at what’s on our plate: 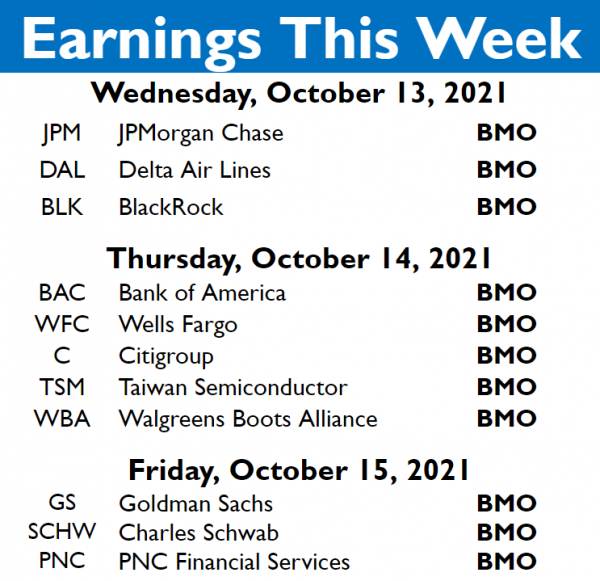 For more information on stocks that are reporting (and what our community is watching), check out the Stocktwits earnings calendar.

📈 IBD’s Moneyworks program is here and we’ve got 8 new lessons on personal finance! Learn about credit scores, buying a house and more*

💸 Musk Pulls Away From The Rest In Bloomberg Billionaires List