Good evening, everyone. Congrats on making it through the first trading day of the year! 2022 will surely be a treat. 😋 🍭

Tesla announced record quarterly deliveries and the stock soared 13.53% to $1,200 per share. $TSLA sits less than 3% away from all-time highs. 👏 Check it out: 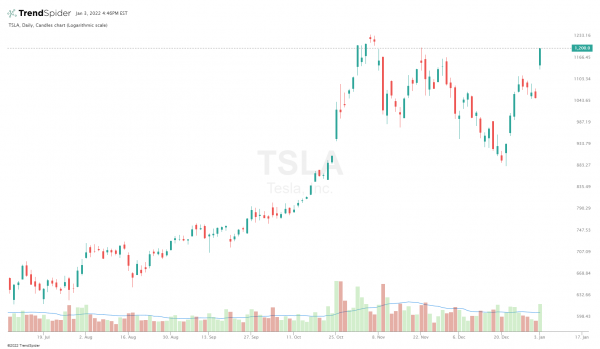 Apple became the first company ever to reach the $3 trillion market cap mark. 🎊 See more on this below.

The sectors traded mixed. Energy erupted 3.1% on the back of crude oil profits. Consumer discretionary ETF $XLY gapped up and gained 2.87%. Materials pulled back 1.3% from highs.

The FDA approved a third round of Pfizer’s Covid-19 vaccine for children between the ages of 12 and 15. 💉

Apple Ascends To The Top 🏆

The world’s largest company exceeded the $3 trillion market capitalization level intraday, becoming the first company ever to do so. 🏆

Just three years after reaching the $1 trillion level, Apple overtook $3 trillion and eliminated any fears that the tech giant’s growth would slow down. 🙅 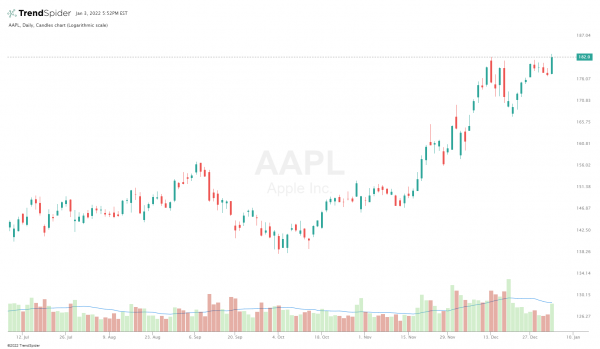 Microsoft is second in line behind Apple, sporting a current market cap of $2.6 trillion. Alphabet is worth roughly $2 trillion while Amazon sits at $1.75 trillion.

The startup space was hot in 2021 🔥 — over the last year, capital has been flowing into seed-stage and early-stage startups. As a matter of fact, a record of $93 billion was invested in early-stage companies last year. But could that trend backfire soon??

As many notable venture capital firms rake in some of their best returns since the dot-com bubble, investors are beginning to question the sustainability of the post-pandemic startup explosion. A partner at Bain Capital Ventures, Matt Harris, commented “It’s going too well. I’m not actually that smart. It can’t continue like this.” An unprecedented 42% of Harris’ portfolio companies IPO’d in 2021. 🚀 🚀

Many industry veterans recognize that macroeconomic factors such as bond yields and tech adoption may fuel startup valuations, but sky-high boosts to early-stage valuations don’t come without the risk of a ‘bubble burst.’ 💥

As Twitter seeks to revamp other areas of its business, the company announced its decision to sell MoPub in October 2021 after the platform unveiled its lofty plan to double its revenue in 2 years. Twitter’s GM of Revenue Products, Bruce Falck, shared:

“With the sale of MoPub completed, we continue to concentrate our efforts on enhancing ads across our platform. Our goal is to deliver faster growth in key areas and accelerate our product development.”

MoPub brought Twitter $188 million in revenue in 2020, but the platform has since decided to focus on the expansion of its communities and subscription services instead. $TWTR closed down 1.3%.

The jurors deliberating Elizabeth Holmes’ trial could not reach a unanimous verdict. Consequently, the judge presiding over the trial ordered the jurors to continue their deliberations over 3 of 11 charges against Theranos’ founder. Among the charges are 2 counts of conspiracy to commit wire fraud, six counts of wire fraud against investors, and three counts of fraud from patients who received inaccurate blood test results. Read more in WSJ.

Mercedes-Benz unveiled its latest concept car, and it’s pretty sweet. The concept vehicle is called the Vision EQXX and it represents the company’s vision for the future of its design, engineering, and sustainability capabilities. Read more in TechCrunch.

Antonio Brown no longer plays for the Tampa Bay Buccaneers. The former wide receiver stripped his shoulder pads and jersey in the middle of yesterday’s game against the Jets. Brown then ran into the end zone as he waved goodbye to fans. Buccaneers coach Bruce Arians said “[Brown] is no longer a Buc. That’s the end of the story.” Read more in CNBC.

👏 Robinhood’s Most Popular Stocks in 2021

📺 Samsung Is Putting NFTs In Its Smart TVs